A Cinematic Monster Timeline To Explain Your Monster Fears 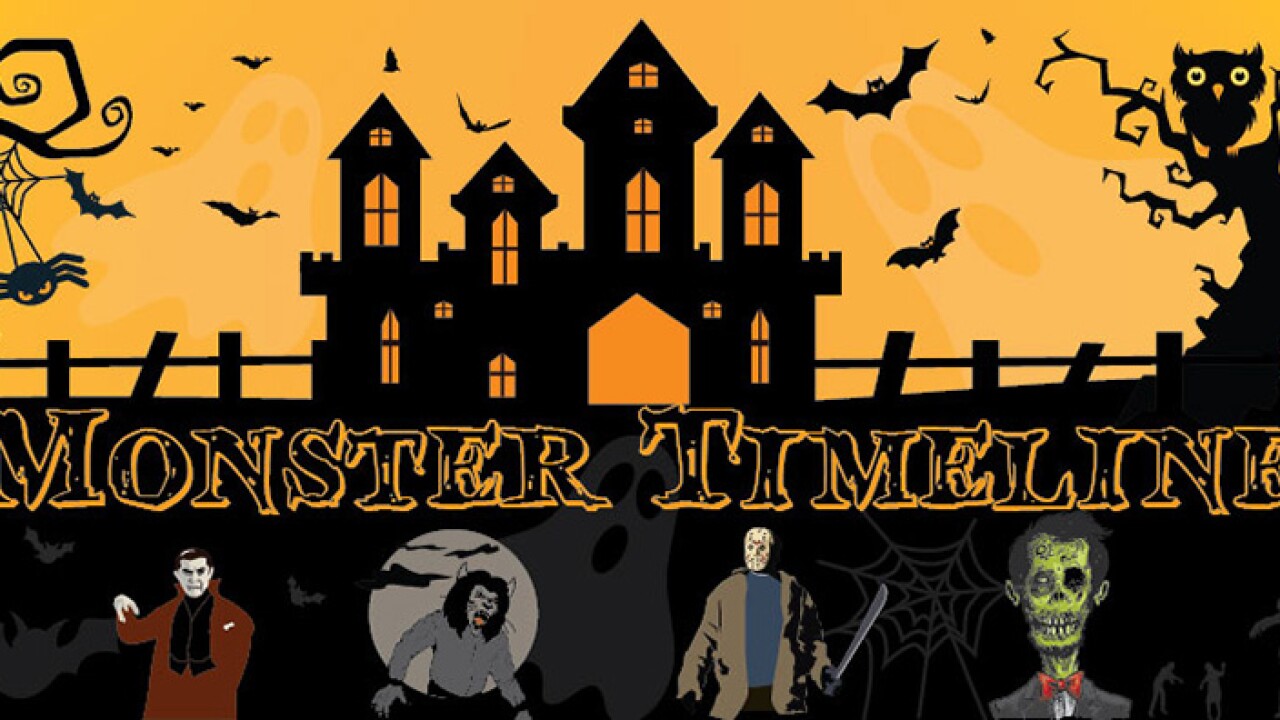 The following article is sponsored by Southern Utah University.

Vampires, werewolves, masked killers and zombies—these are the monsters you seek out at the movies during Halloween. So how did horror films creep into the American pop culture and why do we like to be scared?

According to experts, monsters are created to help us overcome our fears. “The Latin root words for monster, ‘Monstr,’ and ‘Monstri,’ come from the same root as the word ‘demonstrates,’” says Kyle Bishop, associate professor of English at Southern Utah University, film historian and author of two books about monsters. He explains that monsters are the windows to our innermost identity as humans, and as cultures. “Once any culture accumulates enough anxiety, it will produce a monster to explore fear in safe way,” said Bishop.

SUU Associate Professor of Psychology Grant Corser says, “Fear is the response to the threat of physical pain. It is a primal and rudimentary emotion.” All cultures, when in the face of real physical pain, create something to fixate on and transcend the fright engendered by what they are dealing with in reality. Horror movies don’t shy away from tackling subjects that reflect the social and political unrest of any given time period.

As a film historian, Bishop examines cinematic monsters from the 20th and 21st century in order to discover where a monster came from, what it’s trying to address and to learn more about that period in time.

Since the 1930s, four archetypal cinematic monsters have helped Americans cope in an unpredictable world. The first monster created in this epoch comes to us from the ’30s with new monsters created in 1941, during the 1970s, and post 9/11. Here is a monster timeline and the reasons for the creations.

1930s—Dracula: Due to the Great Depression, immigration and Americans’ fear of unemployment, we get monsters representing the old world invading the new. The European accented vampire, Dracula, is one of the first major horror films produced in 1931.

1940s—Wolf Man: As the symbol of the Nazi party, the wolf serves as an illustration of Fascism and the loss of control. The Wolf Man was released in 1941 as an overt representation of Nazi Germany.

1970s—Serial Killers: With the Vietnam War, a severe recession, and an easing of film production codes, we see more violent, gory and graphic movies in the 1970s. The supernatural monsters of the past are replaced by serial killers: humans committing crimes against humans. Movies such as Halloween, Carrie and The Texas Chain Saw Massacre reflect the macabre mood of the decade.

Post 9/11—Zombies: In the new millennium the undead became America’s newest cult trend. After 9/11, zombies embody the fear of illness, infestation, and infection due to terrorist attacks, anthrax threats and global catastrophes. Living in these uncertain times has created turmoil leading to the mass production of zombie thrillers like World War Z, 28 Days Later and Shaun of the Dead.

No one knows what these uncertain economic times will bring, so there’s no reason to be afraid of a looming disaster. Instead of focusing on ridding our culture of monsters, let us instead accept them for what they are, messages to and reflections of our truest selves.

“While fear is an unpleasant state, it is very adaptive, and useful,” says Corser. “It is something that shouldn’t be taken away.”

Horror films give people a safe escape. “We can go to the movies and be afraid for a couple of hours then go home and feel fine,” says Bishop. Real life is never as scary as the movies.

So indulge in your fears and let out a scream at the nearest movie theatre this Halloween.