Some Utahns warming to cryotherapy, others give practice a chilly reception 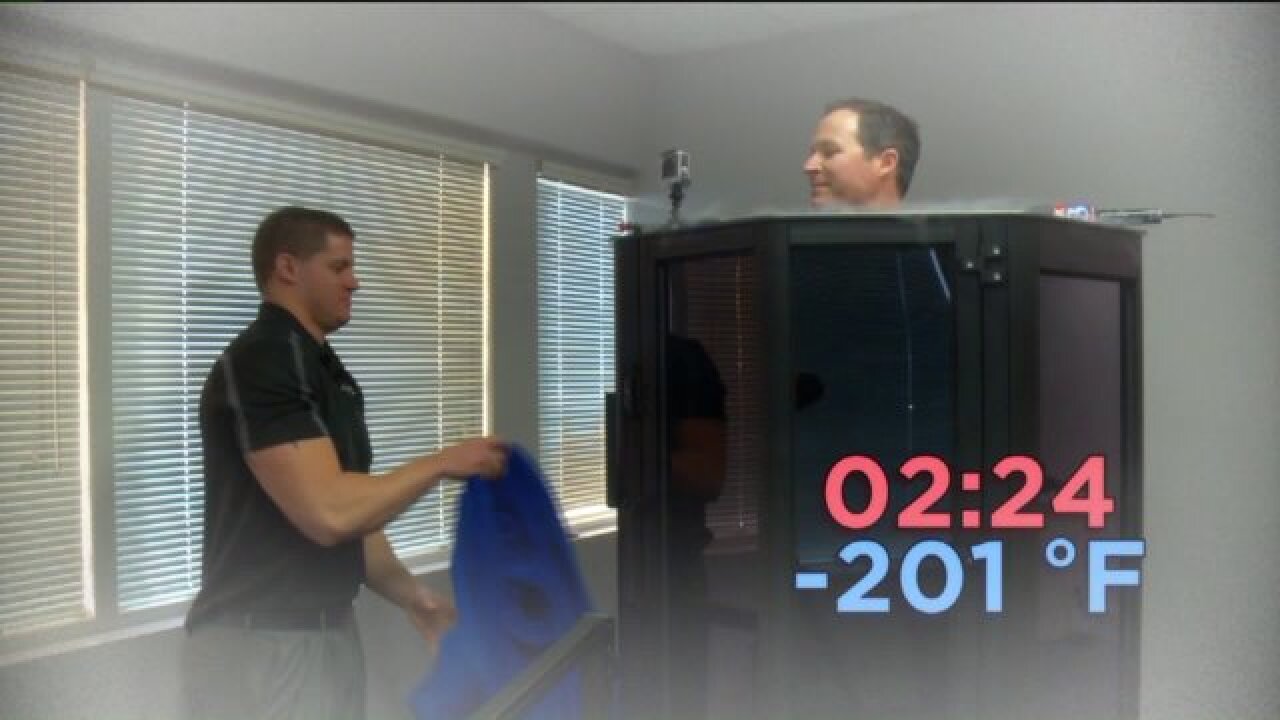 DRAPER, Utah -- Do you want to sleep better? Lose weight? Feel less arthritis pain? Recover faster? There is one therapy claiming to help with it all, and Utahns are freezing for the chance.

It's called cryotherapy. In essence, the therapy consists of standing in a stall the size of a small shower for two to three minutes in temperatures down to -300 degrees Fahrenheit.

'For years we've known cold has been amazing for injuries, helps reduce inflammation, this is just on a much larger scale," said T.J. Berry, Co-Owner of Stone Cold Cryotherapy in Draper.

Whole body cryotherapy traces it's roots back to a doctor in Japan who was looking for a new way to treat arthritis. In theory, it causes a body wide reaction, pulling blood into the core and releasing anti-inflammatories.

Athletes have been flocking to the treatment, many in search of an alternative to ice baths. LeBron James, MMA fighters and even the Weber State Athletic Department is now using cryotherapy.

"We see a majority of their teams," said Berry, referring to Weber State.

Cryotherapy is not regulated by the FDA, and at least one death has been attributed to the treatment. In October of 2015, a worker at a spa in Las Vegas got in by herself and passed out. Her body was pulled out 10 hours later.

Some chambers have a built-in safety measure to prevent those kinds of accidents. At Stone Cold Cryotherapy in Draper, the chamber shuts down if an attendant does not press a button every thirty seconds.

To reach the super freezing temperatures, a liquid nitrogen mist is sprayed inside.

Local MMA athletes Jacob and Jason South both say the treatment has become a key element in their ability to compete.

"It's such a small price to pay for what it does recovery wise," Jason South said.

Jacob South added: :"It's been a key element to my recovery."

Steven Crandall is a physical therapist with decades of experience helping people recover. He is more skeptical of whole body cryotherapy.

"I don't see how two minutes or three minutes in a chamber can cause a physiologic, long-term change," Crandall said.

He believes the concept of using heat and cold is a key to good physical therapy practice. He's just not so sure about spending $50 for a three-minute freeze.

"You don't need fancy materials to use ice or heat," Crandall said.

My own experience with cryotherapy started at 10 degrees below zero and ended at 210 below. Instead of the usual three minutes, I took a route most beginners use and spent only two and a half minutes in the chamber.

By the end, my skin temperature was down to 38 degrees. The time in the chamber was uncomfortable but not unbearable. Afterwards, I did feel good.

For about two hours, my body felt like it had been through a very light workout. I did not experience any long-term benefit, but then I only had one treatment. First timers typically bunch treatments together, building up the effect over the course of a few days.