5 Things You Didn’t Know About the Ancient Olympics 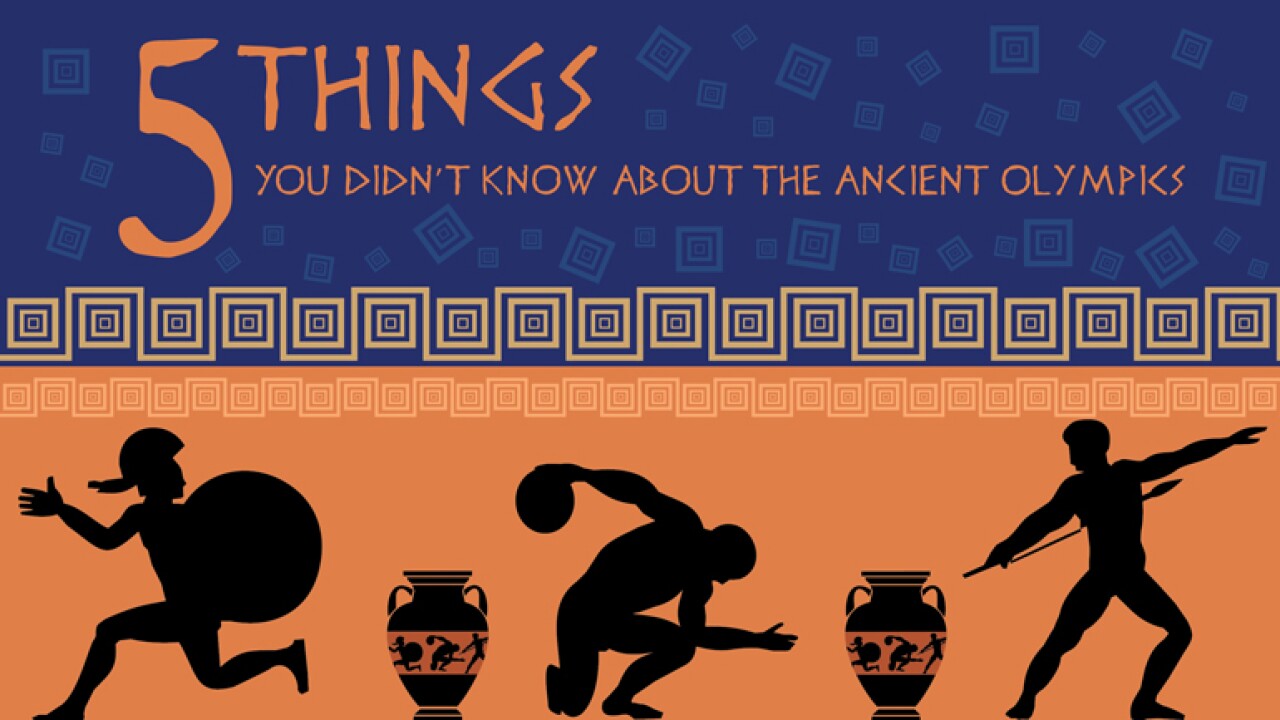 The following is sponsored by Southern Utah University.

Millions of people will be enthralled with the drive, talent and athleticism of the nearly 12,000 athletes competing in 306 events in 28 different sports in this year’s Olympic Games starting on August 5 in Rio de Janeiro. But many have no idea of its ancient origins.

Athletes competed naked as a tribute to the Greek God Zeus. They wanted to show Zeus their physical power and muscular physique. Showing off their bodies also helped intimidate other competitors.

Since Greek heroes were often depicted nude in artwork and sculptures, this inspired athletes to train harder and win their event. Athletes wanted to be compared to true heroes like Hercules and Achilles.

2. There was no Olympic torch

The torch procession we’re all familiar with now didn’t begin with the Greeks. It began with the Nazis. It was invented in 1936, while Hitler was Chancellor, when Germany hosted the Olympics. Many historians speculate whether or not it was used to advance Nazi propaganda.

The only connection with the torch and the Greeks is they had torch races. One of the competitions was to run with a torch and if your fire went out you lost.

3. The beginning and end of the ancient Olympics.

The Olympics have come a long way since its early beginnings. The games began with a footrace in 776 B.C. as part of a religious festival honoring the Greek God Zeus. According to ancient legend a cook named Coroebus won the 192-meter footrace, the only event at the time. The ancient games lasted for nearly 12 centuries before Roman Emperor Theodosius saw the games as a pagan cult and banned it in 393 A.D.

The first modern games wouldn’t resurface again until 1896 thanks to the efforts of Baron Pierre de Coubertin of France.

Unlike modern Olympics, where the athletes only walk away with a medal and recognition, the ancient winners received a cash prize. After winning they would receive a crown made of olive leaves.  When they arrived home they would be given the equivalent of about $100,000 U.S. dollars.

There was also no first, second or third place. There was only one winner in each event and they gained all the fame and honor for themselves and their hometown, which was a huge motivation to participate.

In Greek legends, death was a terrible experience. They believed when you died it was all over and you spent the rest of eternity in endless torment. This is why Hercules was so revered. He was a mortal man who won immortality because of his athletic accomplishments.

Lunt believes that many people competed in the Olympics hoping they’d be able to achieve some portion of immortality. By consistently winning athletes would have statues sculpted and songs written about their achievements, which meant their legacy would live on through the ages.

The 2016 Rio Olympics will be very different from when it began 2,792 years ago, but one thing stays consistent: the sheer athletic drive and determination to win and become a legend.