Is there something wrong with this White House photo of health care talks? 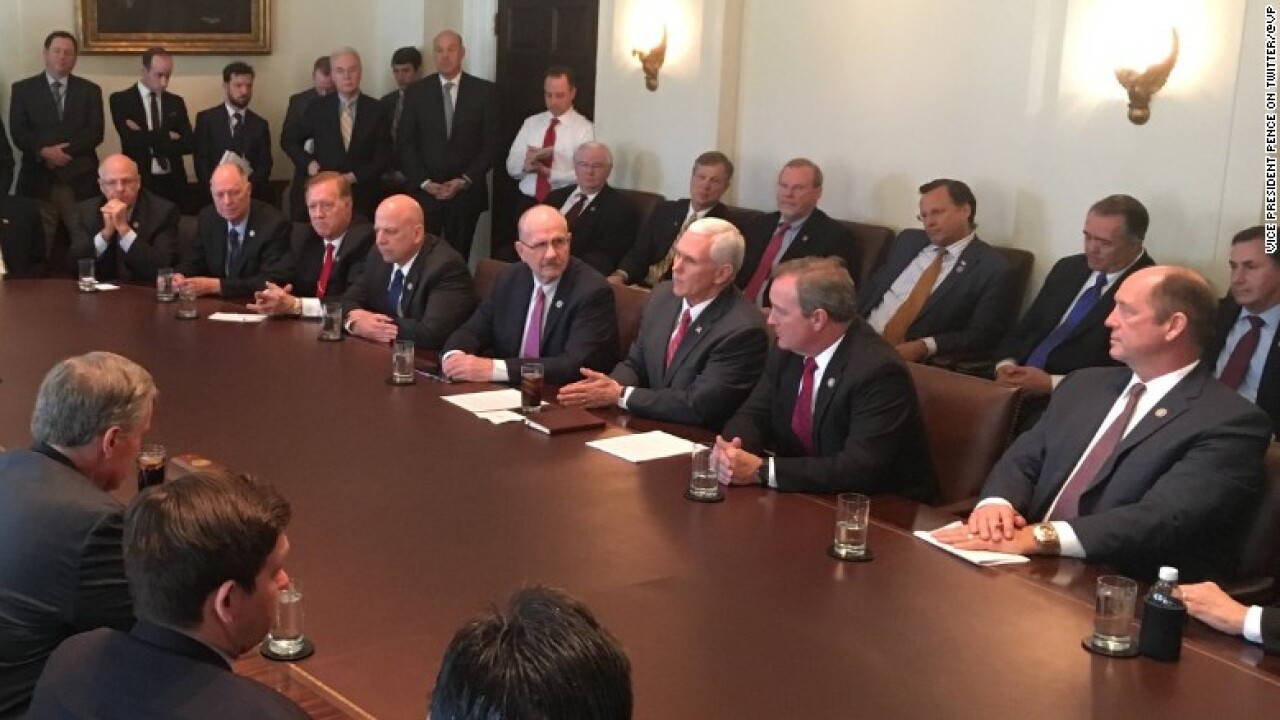 Democrats, women’s groups and liberals seized on a photo Thursday shared by Vice President Mike Pence of a meeting he attended with President Donald Trump and members of the House Freedom Caucus.

Their gripe? The photo featured no women, even though lawmakers were discussing Republicans’ health reform proposal — and members of the House Freedom Caucus want to strip a requirement that health insurance plans cover essential benefits, including coverage for maternity services.

“Appreciated joining @POTUS for meeting with the Freedom Caucus again today. This is it. #PassTheBill”

Sen. Patty Murray, a Washington Democrat, fired off an ironic tweet making that point, calling the female-free meeting a gathering of the GOP’s women’s health caucus.

Trump has held a lot of meetings about health care reform, some more public than others, most with documentary proof of women in attendance.

After the criticism of Pence’s photo, Trump’s director of social media, Dan Scavino, tweeted a photo of Trump meeting with lawmakers including a number of Republican women from the more moderate Tuesday Group.

The larger issue for the earlier photo had more to do with the simultaneous debate over maternity care.

It has long been a conservative talking point that under Obamacare, plans must cover services that only apply to half the population. Democrats’ snappy reply is that everyone benefits from healthy moms and babies.

It wasn’t the first uncomfortable moment for Republicans on the issue.

A rare look inside the GOP’s women’s health caucus. https://t.co/SgLmvSpeSM

Sen. Pat Roberts of Kansas was asked how he felt about the idea of stripping those benefits and he ironically replied to a Talking Points Memo reporter that, “I wouldn’t want to lose my mammograms.”

Roberts quickly apologized, which showed he was sensitive to the gaffe. it would be harder for members of the Freedom Caucus to change the optics of their photo; there aren’t any women members. At least there don’t appear to be. Their official Twitter account follows 12 members of Congress, and none are women.

It should probably not come as a complete surprise that a large grouping of Republican members would not include a woman.

Less than 20 percent of the 430 sitting members of the House of Representatives are women, and most of the women in office are Democrats. Of the 237 Republicans in the House, 21 of are women, according to the Center for American Women and Politics at Rutgers.

The White House will face problems if it gives too much to the Freedom Caucus; because more moderate members, including some Republican women, are likely to oppose the bill.

In fact, House leaders had to put the skids on a planned Thursday vote as they scraped for more Republicans to support it.