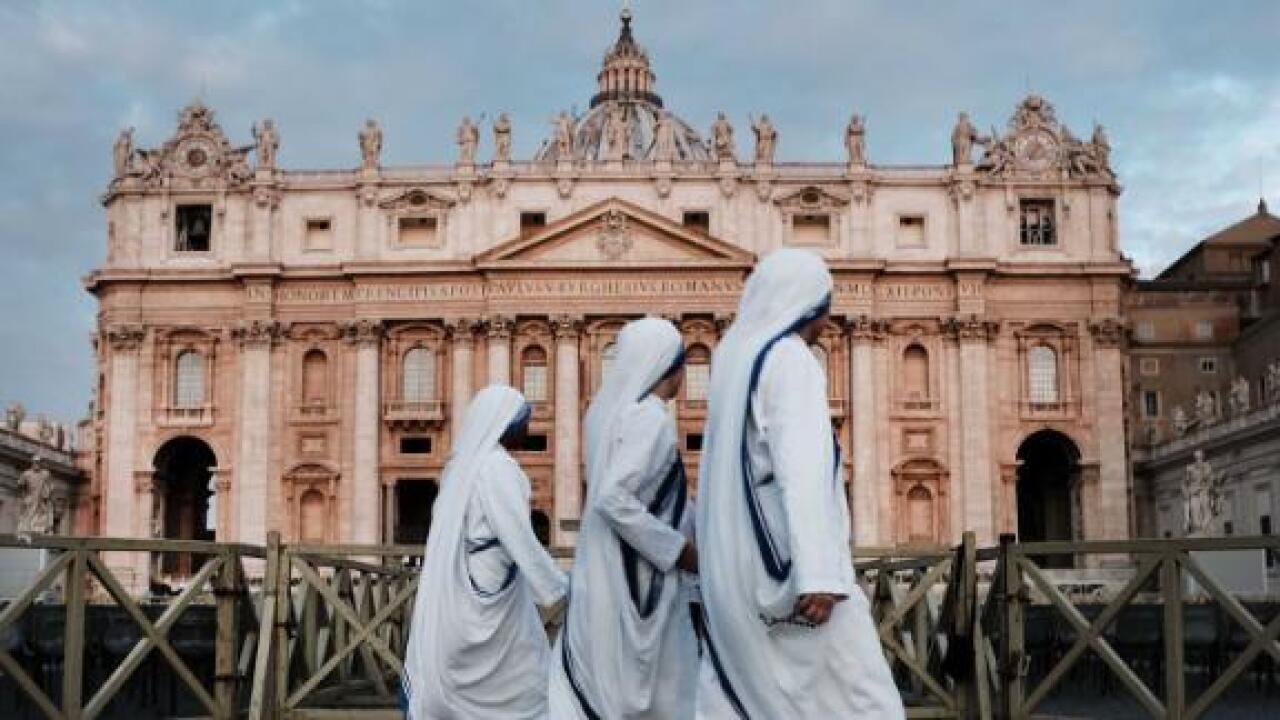 VATICAN CITY, VATICAN – SEPTEMBER 03: A group of nuns walk through St. Peter’s Square at dawn on September 03, 2018 in Vatican City, Vatican. Tensions in the Vatican are high following accusations that Pope Francis covered up for an American ex-cardinal accused of sexual misconduct. Archbishop Carlo Maria Vigano, a member of the conservative movement in the church, made the allegations and has called for Pope Francis to resign. Many Vatican insiders see the dispute as an outgrowth of […]

As the Vatican began a historic summit on combating clergy sexual abuse, prosecutors in the United States slammed the Catholic Church, saying it should not be trusted to police itself.

In Michigan on Thursday, State Attorney General Dana Nessel held a press conference to update the public on her investigation of the state’s seven Catholic dioceses. In October, Michigan police seized hundreds of thousands of pages from church offices.

Nessel’s office said it is investigating 300 tips and has asked the dioceses to suspend their own internal review processes until the investigation is over.

At the press conference, Nessel said the dioceses should stop “self-policing,” according to Detroit News. She also accused church officials of asking victims to report abuse only to the dioceses and pressuring victims into non-disclosure agreements or confidential settlements.

Nessel urged clergy sexual abuse victims to report their abuse to the police, not the church.

“If an investigator comes to your door and asks to speak to you, please ask to see their badge and not their rosary,” she said.

Since 2002, the archdiocese has reported all accusations of clergy sexual abuse to law enforcement and has not entered into any non-disclosure agreements with victims, said spokesman Ned McGrath.

“The Archdiocese of Detroit does not self-police,” McGrath said.

US momentum against church builds amid summit

The Michigan investigation of clergy sexual abuse in the Catholic Church is joined by a federal investigation and similar probes in at least 12 other states and the District of Columbia.

The investigations follow a damning report released by a grand jury in Pennsylvania last August that accused more than 300 “predator priests” of sexually abusing more than 1,000 children in six dioceses since 1947. The vast majority of cases occurred before Catholic bishops in the US instituted new child-safety protocols.

Pennsylvania Attorney General Josh Shapiro, the man behind that report, said Thursday on Twitter that “the Pope promised real change to protect children. Based on our investigation, it’s clear that the church can not be trusted to police itself.”

Shapiro’s comments come just two days after Catholic leaders in Denver reached an agreement with the Colorado attorney general to allow a former federal prosecutor to review its files related to allegations of sexual abuse. Attorney General Phil Weiser stressed, however, that it is not a criminal investigation.

“I am confident in the steps we have taken to address this issue and that there are no priests in active ministry currently under investigation,” said Denver Archbishop Samuel J. Aquila.

Meanwhile in California, a state senator introduced a bill on Wednesday that would force priests to report suspected child abuse, even if that meant violating the seal of the Sacrament of Penance, widely known as Confession. Under current church law, priests who violate the secrecy of the sacrament can face excommunication.

“Individuals who harm children or are suspected of harming children must be reported so a timely investigation by law enforcement can occur,” said State Senator Jerry Hill, a Democrat from San Mateo.

“The law should apply equally to all professionals who have been designated as mandated reporters of these crimes — with no exceptions, period. The exemption for clergy only protects the abuser and places children at further risk.”

The actions by US prosecutors and legislators came as nearly 200 Catholic leaders from around the world descended upon the Vatican to address the clergy sexual abuse crisis.

The four-day summit, convened by Pope Francis last September, has included a speech by the Pope, talks outlining best practices and small-group discussions among bishops.

On Thursday, the pontiff opened the summit by urging the bishops and other church leaders to commit to taking concrete actions.

“The holy people of God are looking at us and expect from us not simple condemnations,” Francis said, “but concrete and effective measures to put in place. We need to be concrete.”

The Pope then said he had made a list of 21 “reflection points” that were handed out to the assembly of church leaders, which included preparing a “practical handbook” of guidelines for handling abuse cases when accusations emerge.

Also included are instructions to inform civil authorities and church officials whenever an accusation is made, establishing provisions to include non-clergy experts in investigations, as well as formulating “mandatory codes of conduct” for all church clergy, personnel and volunteers “to outline appropriate boundaries in personal relationships.”

More controversially, the Pope proposed that dioceses and Catholic organizations around the world not publish lists of clergy accused of abuse before a preliminary investigation and “definitive” condemnation have occurred.

“The principle of natural and canon law of presumption of innocence must be also be safeguarded until the guilt of the accused is proven,” the Pope said in the “reflection points.”

Abuse survivors often argue that the public should be notified whenever an accusation is made, both to protect the community and to encourage other potential victims to come forward.

“This seems to say that if a priest or a nun or deacon gets accused they don’t tell the parish until the accusation is ‘proven,'” said Tim Lennon, of the Survivors Network of those Abused by Priests, who is in Rome participating in vigils with other victims of clergy abuse.

“Well, who proves this? The police or the bishops? We’ve seen for 35 years that bishops often cover up, so no one trusts that they are going to be good arbiters of guilt and innocence.”