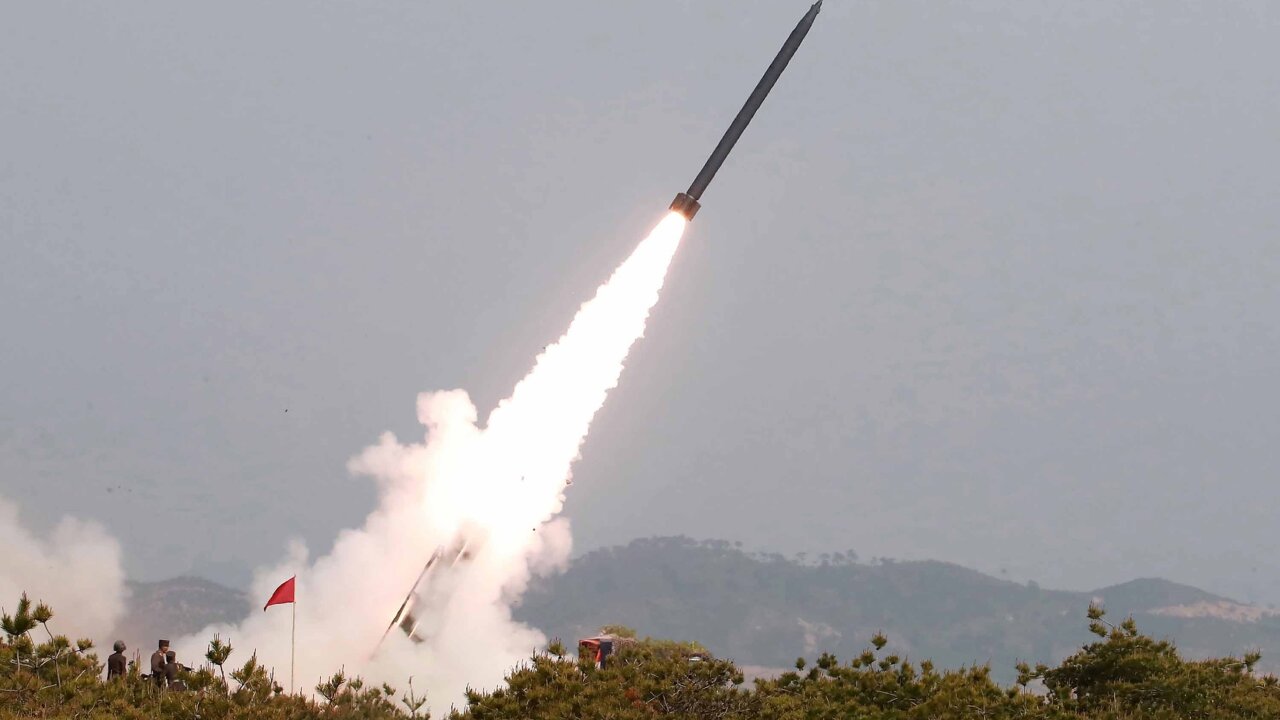 This photo, provided on May 5, 2019, by the North Korean government, shows a weapons test the day before.

“The purpose of the drill was to estimate and inspect the operating ability and the accuracy of striking duty performance of large-caliber long-range multiple rocket launchers and tactical guided weapons by defense units in the frontline area and on the eastern front,” the news agency said in a report on Sunday.

In a statement Sunday, South Korea’s Defense Ministry said that North Korea test-fired 240 mm and 300 mm multiple rocket launchers, including a new model of a tactical guide weapon. According to the defense ministry’s assessment, the launchers’ range is about 70 to 240 kilometers (43 to 149 miles).

The statement added that both South Korean and US authorities are still analyzing the details.

The test is understood to be the first missile launch from North Korea since late 2017 — and the first since US President Donald Trump began meeting the country’s leader.

The move could escalate tensions with the United States, coming two months after Trump walked away from a second summit between the two leaders.

Writing on Twitter Saturday morning, Trump said: “Anything in this very interesting world is possible, but I believe that Kim Jong Un fully realizes the great economic potential of North Korea, & will do nothing to interfere or end it. He also knows that I am with him & does not want to break his promise to me. Deal will happen!”

On Sunday, South Korea’s Defense Ministry said that that “our military maintains a solid ROK-US combined defense posture and supports the ongoing diplomatic efforts with a powerful force.”

White House Press Secretary Sarah Sanders said in a statement Saturday that “we are aware of North Korea’s actions tonight. We will continue to monitor as necessary.”

Japan’s Defense Ministry said there was no evidence the projectiles had landed in its territorial waters.

Saturday’s launch comes a few weeks after North Korea said it conducted a tactical guided-weapons firing test, according to state media. Kim praised that test as a “great historic event in strengthening the combat capability of the People’s Army,” KCNA reported.

Following the launch, South Korea’s Foreign Minister Kang Kyung-wha spoke with her US counterpart, Secretary of State Mike Pompeo, about the situation.

“The two sides agreed to continue the further analysis of today’s launch and continue to communicate while carefully handling (the situation),” South Korea’s Foreign Ministry told reporters via text message.

North Korea’s missile program made major strides in 2017, when Pyongyang claimed it had successfully test fired three intercontinental ballistic missiles. Experts said the Hwasong-15, which was launched in late November 2017, likely had the capability to hit much of the United States.

After making some progress in 2018, talks appeared to stall this year when Kim and Trump’s second meeting in Hanoi, Vietnam ,abruptly ended with no agreement.

“Sometimes you have to walk,” Trump said during a news conference after the talks, which broke up earlier than planned. North Korean state media later acknowledged that the meeting hadn’t gone as well as expected.

Pyongyang has been pushing for more sanctions relief in exchange for denuclearization, while the US has demanded greater evidence that the country is prepared to reduce its nuclear arsenal.

On Sunday, Pompeo said the missiles launched by North Korea, were “relatively short range” and “landed in the water east of North Korea and didn’t present a threat to the United States or to South Korea or Japan.”

In an interview with ABC News This Week Pompeo said “we still believe there’s an opportunity” to achieve “verified denuclearization” and that he hopes “we can get back to the table and find the path forward.”

Analysts said the projectiles fired on Saturday were unlikely to fall within the category of weapons that Pyongyang had promised Washington to stop testing after negotiations began last year.

“With North Korea never promising to completely stop all missile testing — it only promised a self-imposed moratorium of testing long-range missiles such as ICBMs that can hit the US homeland — we should not be shocked by North Korea’s short-range launch,” said Harry J. Kazianis, Korean studies director at the Washington-based Center for the National Interest.

“Clearly, Pyongyang is frustrated with the conclusion of the recent summit with Washington in Vietnam that did not produce any breakthrough. It also seems clear that North Korea is angry over what appears to be a lack of flexibility in the Trump administration’s position on relieving sanctions, sticking to a policy of ‘maximum pressure’.”

Kazianis added that it appeared Kim “has decided to remind the world — and specifically the United States — that his weapons capabilities are growing by the day.”

Adam Mount, director of the Defense Posture Project at the Federation of American Scientists. said that the launches “not only send a signal of impatience to Washington; they are also intended to develop and demonstrate a new system. After a year and a half pause, Pyongyang has returned to missile testing.”

Last month, Kim and Russian President Vladimir Putin met for the first time in Russia. Analysts say the meeting may have been an attempt by Putin to reinsert Moscow into the discussion over one of the region’s most pressing problems. So far, talks have primarily involved the US and South Korea.