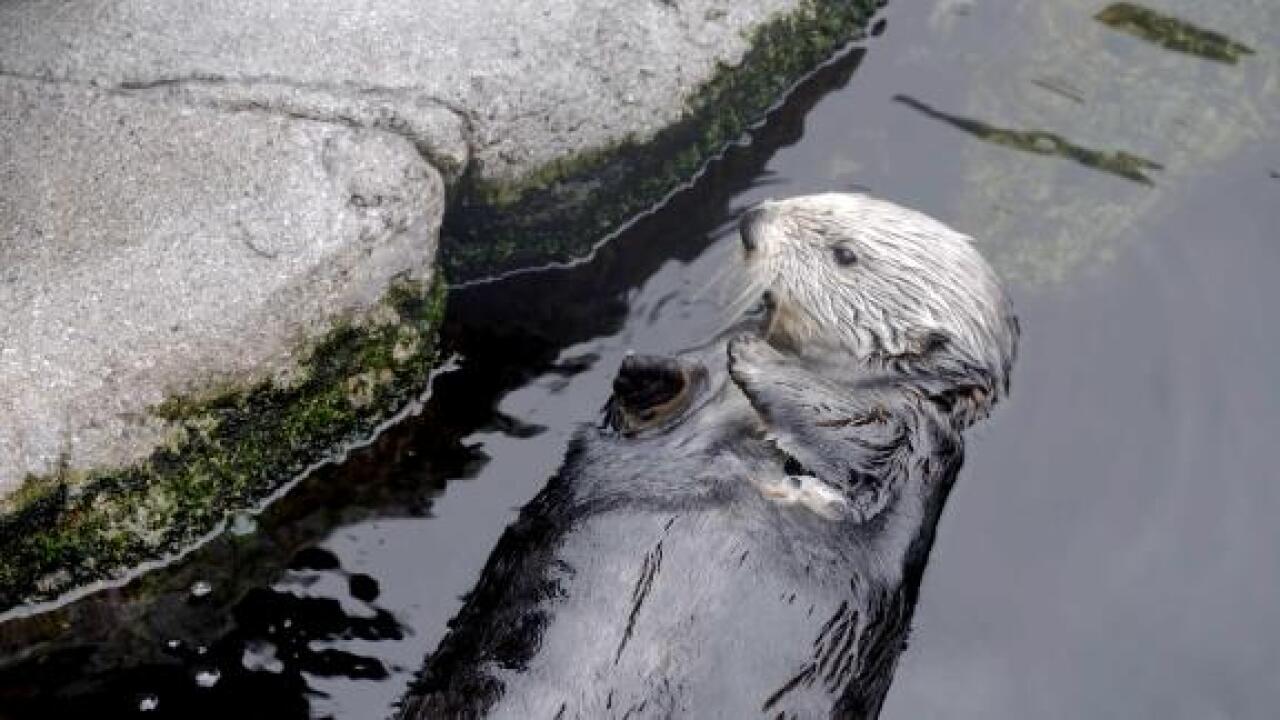 Rosa and Selka get lots of attention in their starring roles at the public daily feedings at the Monterey Bay Aquarium, especially during Sea Otter Awareness Week.

But some of their most important work is behind the scenes, serving as foster moms to abandoned pups in the aquarium’s one-of-a-kind program to rescue, nurture and return sea otter pups to the wild.

Rosa and Selka are part of a group of surrogate sea otters who can’t be released back into the wild, either because of injury or inability to stay away from humans. But they still can teach these rescued pups how to be sea otters.

They show them how to eat crabs and crack open clams and mussels; they protect and guide the pups during interactions with other otters; and they allow the pups to imprint on their own species, teaching them that they are sea otters.

Neither otter has given birth, but Rosa has raised 15 pups and Selka has raised three, one of which was found abandoned at a nearby beach last year. Their most recent pups are due to be released into the wild in late October.

Since 2001, the aquarium has rescued and released some 100 sea otter pups as part of its conservation efforts around the world. They are part of the more than 876 sea otters who have been treated at the aquarium.

One of California’s most popular tourist destinations, the non-profit aquarium welcomed nearly 2 million visitors in 2018 and reported $103 million in expenses. Some 13 percent of that budget — nearly $13 million — went to conservation and research.

The aquarium started rehabilitating newborn and injured sea otters in 1984, before the aquarium even opened its doors later that same year.

Because of the fur trade in the 18th and 19th centuries, sea otters were nearly hunted to extinction in the state, the aquarium says. The state’s population is currently just over 3,000 sea otters between Santa Cruz and Santa Barbara. (The otter population has not yet been restored to their historical range from Alaska to Mexico’s Baja California.)

The aquarium’s efforts are slowly restoring the local population.

“The first animals that we worked with were pups that had stranded, and the idea was that we would be able to populate the exhibit here at the aquarium with stranded animals, as opposed to going out and collecting otherwise healthy wild sea otters and moving them into captivity,” says marine mammal researcher Karl Mayer, who was part of the initial team that developed the surrogacy program.

“That really was the advent of this whole sea otter program here,” he says.

Bonding with the sea otters

At first, the humans were very hands-on.

“Sea otter pups are born in the wild and essentially they have no survival skills whatsoever,” says Mayer. “They’re little corks on the surface of the ocean, they’ve got very bland fur, they’re totally dependent on the mother for essentially 100% of everything that they do.”

“When we get an orphan sea otter pup, one of the big challenges is trying to take the place of mom in rearing that pup while still maintaining its wildness.”

Everyone in the area knew to call the aquarium when they spotted abandoned or injured sea otters. Aquarium staff cared for the sea otter pups and adults, naming them, feeding them, raising the pups and restoring them to heath.

While many otters survived, they got too attached to their human handlers. The first rescues hung out in the bay, expecting food from humans, bothering boaters and kayakers, unable to survive in the wild on their own.

In 2001, they developed a solution. Aquarium staff had been trying to pair adult females with rescued pups, and they found the right adoptive mother in an adult female who had just given birth to a stillborn pup at the aquarium. She bonded with a rescued pup, and the surrogacy program was born.

Since that year, the aquarium’s sea otter program team has paired the rescues with Rosa, Selka and other female adult otters who can’t be returned to the wild.

The human aquarium workers started covering their faces and bodies with so-called “Darth Vader” costumes whenever they needed to feed or otherwise care for the pups, limiting eye contact and scent. They also stopped naming the pups, instead giving them more impersonal numbers.

Giving them numbers instead of names “reduces the likelihood of attaching to these developing pups or these orphaned pups as if they were pets or in other ways developing a closer association than we want,” says Mayer. “We want these animals to essentially be anonymous, in the sense that ultimately we want them back out in the wild population as opposed to here in captivity.”

That reduced the tendency of the pups and humans to bond, increasing the rate of sea otters released into the wild surviving there.

Since 2001, the aquarium has released 100 juvenile pups back into the wild, tagging them with transmitters and flipper tags to follow them long-term.

The human staff count on the mothering abilities of sea otters like Rosa and Selka.

The pups “go through a natural imprinting on the sea otter mother as opposed to on human caregivers and ultimately when they’re released to the wild, they behave out in the wild like sea otters are supposed to,” says Mayer.

The grand dame of the sea otter exhibit, Rosa just finished raising a pup abandoned by its mother near Pismo Pier last year. Rosa, who turns 20 in August, was hand-reared by human caregivers and released in 2000.

Rosa stayed in contact with humans, approaching divers and kayakers, and so was brought back to the aquarium. She has retired after successfully raising 15 pups.

Unable to survive in the wild since her recovery from a 2013 shark wound, Selka has raised three pups so far.

Once weaned, the otters have been released into a small population of sea otters in Elkhorn Slough in Monterey Bay.

The slough has been a pretty protected environment. “It was a kind of ideal place to put relatively naive juvenile sea otters that essentially were having to acclimate to an unfamiliar environment.”

“What we found was that the sea otters up in Elkhorn Slough are acting as keystone predators,” says Karl Mayer. “Through their feeding habits, they actually allow the ecosystem to become healthier and more diverse.”

Now the aquarium has proof that its program works.

A recently published study documented how the program “helped restore the population in the coastal estuary, with surrogate-reared otters and their descendants accounting for more than 50 percent of observed population growth” over a 15-year period, the aquarium said in a statement.

That’s got aquarium officials thinking about releasing sea otters in Morro Bay on the Central Coast, where a small population of otters already live.

Care fit for a sea otter

The aquarium’s behind-the-scenes system is impressive.

There’s an intensive care unit where the pups are treated for injuries, with cameras so staff can monitor them without the disguises; a food preparation area — sea otters eat about one-third of their weight every day in clams, squid, shrimp, crabs, snails, urchins and mussels; and three open-air tanks on the roof where healthy otters live until their release.

No one is allowed to come face-to-face with the otters without a disguise, unless human safety is at risk, even if it’s just tossing food into one of the tanks.

Connecting conservation with the public

“We can really make a strong connection between what’s going on in the wild population and the public through the animals that we’ve got on public display here on the exhibit,” says Mayer.

“An otter like Selka, who was herself reared as a surrogate pup, released back to the wild and then wound up suffering shark bite trauma — she winds up being an ambassador for her wild counterparts and really can sort of be an exemplar for how difficult it is for these animals to survive out in the wild.”