‘Model of restraint and professionalism’: SLCPD responds to police actions after clash with protesters at homeless camp 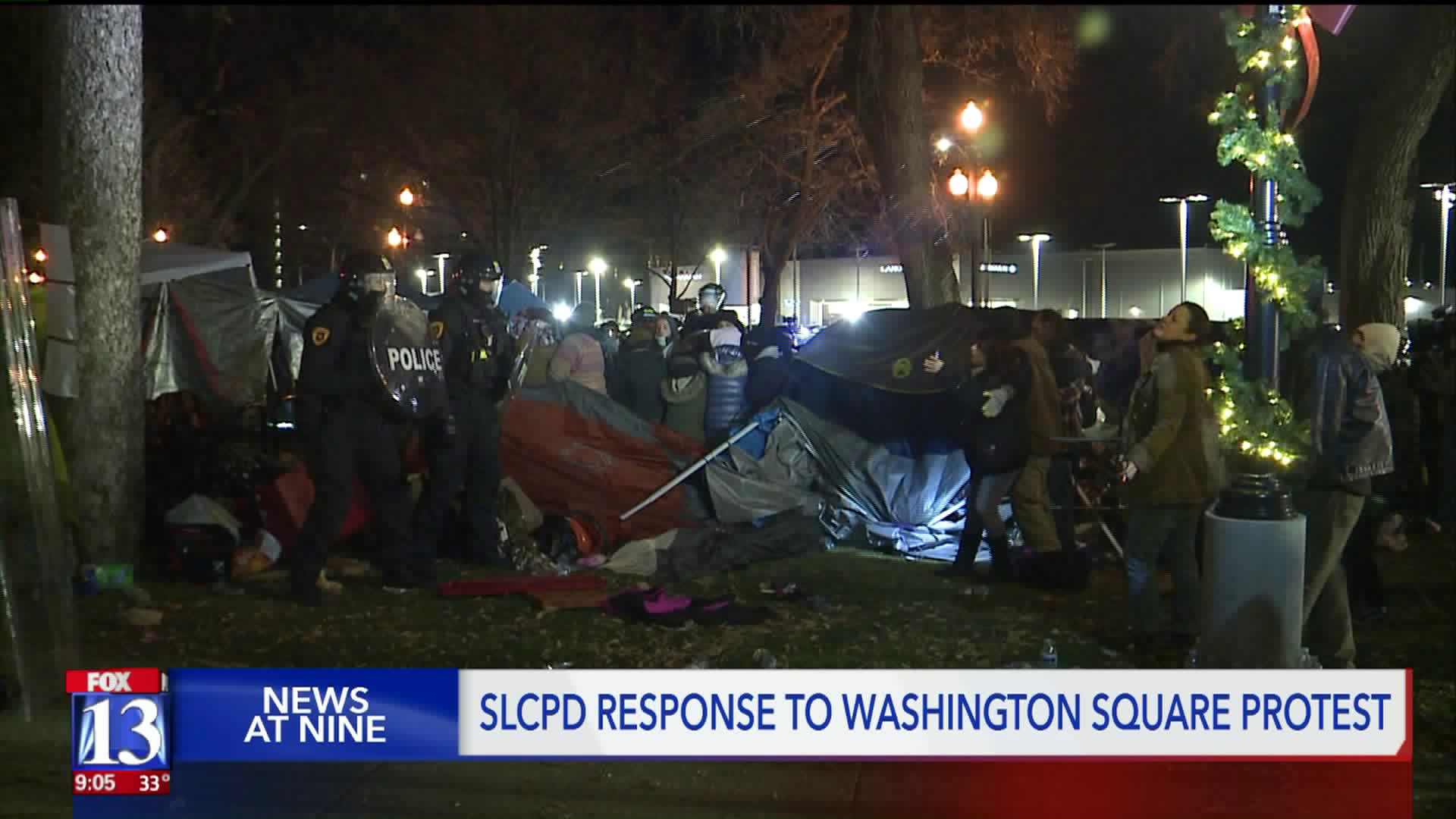 Police are addressing officer behavior after 17 people were arrested Saturday night during an occupy-style protest in Washington Square park. 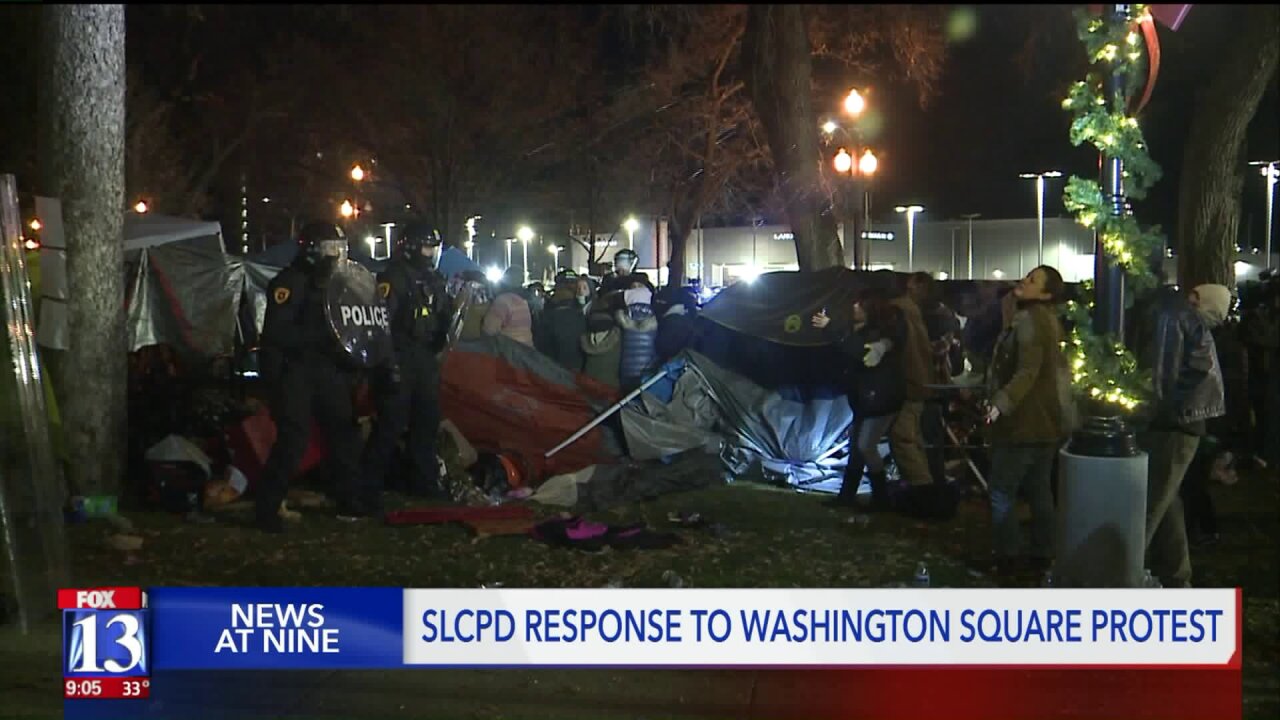 Sunday night, the park painted a very different scene than just 24 hours prior. A single cop car circled the inner perimeter of the park as another patrol car sat stationary off 500 South in downtown Salt Lake City.

Saturday night, however, more than 100 officers and civilian staff with SLCPD were needed to control an occupy-style protest – in which an estimated 100 people had set up a massive camp to protest the treatment of people experiencing homelessness.

“We were told some un-sheltered people along 500 South were woken up very early that morning and told to move to Washington Square,” said SLCPD communications director, Christina Judd.

The group set up shop Thursday and intended to stay until public officials listened to their demands, saying they wanted to see a new shelter open to replace the beds at the now-closed road home, as well as for police to stop issuing citations to those who are living on the streets.

“The mayor’s communications director called the point of contact for the protesters at noon on Friday and offered to meet with them at 3:30 that same day with both Mayor Biskupski and Mayor-elect Mendenhall and Chief Mike Brown. They were told they would call back, and they did not,” Judd said.

On Friday, police said officers and fire personnel also hand-delivered notifications and copies of the city ordinances they were breaking. They continued to pass out the notifications throughout the day Saturday.

“I hereby order all persons of this assemble in violation of city ordinance 11-12-0-8-0, camping on public grounds, parks, streets and playgrounds,” an officer can be heard saying. “You are hereby ordered to leave — failure to comply will result in arrest.”

Each announcement was then followed by a count of the beds currently available at each shelter.

“At the time we began this operation, there were — and we confirmed this — there were 74 beds at the shelters,” said SLCPD Chief Mike Brown.

“There are currently at least 38 men’s beds, and at least 5 women’s beds available,” an officer said over the loudspeaker as a crowd continued to chant in the background.

Police made the announcements for more than an hour and said they were ready to provide transportation to anyone wishing to go to the shelter. However, when it came time to actually be transported, they said nobody would go.

“There’s no openings at the shelter,” a man experiencing homelessness can be heard saying to an officer through the body camera.

“There’s 30, we can get you a ride down there,” the officer responded.

“I can’t, I got my reasons why I can’t,” the man said before he shook the officers’ hands and started to walk away.

Now, through all the yelling, shoving, chanting and even throwing, Chief Brown said his officers did not respond in an unruly manner.

“We have been accused of being heavy-handed and violence. I’m here to tell you what I have personally seen has been a model of restraint and professionalism in the face of some of the most inciting and vulgar verbal assault that one could tolerate,” Brown said.

The night ended with 17 arrests: four booked into jail and 13 citations for violations of curfew, trespassing, interfering with arresting officers, disorderly conduct, failure to disperse and resisting arrest.

Police said the majority of those who were arrested were also part of the Inland Port Protest a few months ago. Those who were cited could face further charges as the police investigation continues.

As to those involved who are experiencing homelessness, police said the majority left after they started their announcements. Brown also claims the number of camping citations have dropped immensely from 349 total citations in 2017 to 94 citations in 2018 and finally 45 citations in 2019.

“We’re never going to be able to arrest our way out of homelessness, addiction or mental health issues,” Brown said. “In lieu of any type of citation or arrest, we are trying to connect them to services.”

Police said public services estimated they removed six to seven tons of trash in two days, and over 825 pounds of evidence that was collected and removed.

If anyone camping at the site has items that were removed and brought in as evidence, they can be retrieved by calling 801-799-3000.