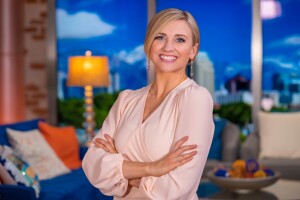 Hi, I'm Amanda; born in Reno, NV and raised in Utah! At the wise age of 8 years old, I became the host and producer of "Lightning ABC Radio;" an ambitious operation located in my parent's basement.

As critically acclaimed as that was, I could only go up from there, eventually becoming my high school paper's cartoonist, and in college, the Arts and Entertainment Editor for its paper.

I was hired while still in college to be a writer for The Salt Lake Tribune's entertainment magazine, In Utah This Week. But radio came calling again, and I enlisted as a rock DJ at 94.9 The Blaze, while at the same time, appearing in entertainment segments for Park City TV.

That was enough to catch the TV bug, and I went full-time at KUTV as an assignment desk editor; soon promoted to help launch and associate-produce their first lifestyle show, "Fresh Living." That darn radio got me back AGAIN; this time as a morning show host at 101.5 The Eagle!

I left when I had my son in 2014, but didn't stay away too long, returning to KUTV as a weekend feature reporter until 2017.

I took time off to raise my son, become a certified meditation teacher, and launch a yoga business. In 2018, I became a host on Fox13's "The Place" lifestyle show, and also fill-in on the news side as a feature reporter.

I feel fortunate to be doing what I love with co-hosts I love, while still teaching meditation and yoga, as well as enjoying my people (my reporter husband and son William) and animals (a horse, a cat, and a dog).