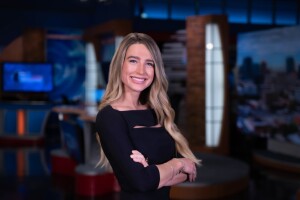 Quickly after college, Dani started her career as a reporter at TMZ in Los Angeles. After her time covering some big entertainment stories, she moved to Knoxville, TN where she worked as a multimedia journalist, traffic anchor and morning weather anchor.

During her time in the Volunteer state, she felt blessed with the opportunity to travel to India and tell stories with a missionary team who builds schools and homes for children. That was a life changing adventure for her.

She absolutely fell in love with East Tennessee, the people and VOLS football, but found herself closer to home in Southern California working as a Weather Anchor and Reporter in San Diego.

Dani graduated from the University of Southern California with a degree in Broadcast and Digital Journalism, so yes, she bleeds cardinal and gold. She is all about Trojan football -- Fight On!

Fun fact -- She got her first big break at the age of 10 years old when she starred as a TV reporter in her 5th grade play!

She grew up surfing in a little beach town called San Clemente, aka the "Spanish Village by the Sea." She loves salt water in her hair and sand between her toes, but now the mountains are calling her name!

Dani is ecstatic and grateful to join Fox 13's incredible team and make beautiful Utah her new home. She can't wait to explore, hike, ski, and take in everything that makes Utah so special.

Her family knows she spends too much time in the grocery store making friends with strangers, so feel free to reach out, say hi, and give some recommendations for the best things to do and places to eat in Utah!