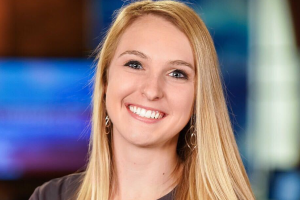 Erin is thrilled she works her dream job in her home state. A Cache Valley girl through and through, Erin graduated from Utah State University and is proud to call herself an Aggie. She’s a Multimedia Journalist (MMJ), which means she’s her own photographer and editor in addition to being a reporter.

Before joining the Fox13 team, Erin was a freelance photographer in Cache Valley for all Salt Lake City TV Stations.

She returned to the East Coast later that year to work as a communications intern in the Senate.

Erin’s investigative reporting at USU became an Emmy award-winning, three-part series on sexual assault in 2018. She is a three-time Emmy nominee.

In 2020, Erin was awarded first place by the Utah Society of Professional Journalists in TV Criminal Justice after investigating gambling issues in Utah for nearly two years.

Erin is one of the only bilingual reporters in Utah who speaks Cantonese. Living in Hong Kong China for 18 months, she fell in love with the culture, language and people.

While studying journalism and political science at Utah State University, Erin researched and co-wrote an award-winning paper on Utah women and the constitutional defenses they employed for suffrage.

When she’s not pursuing a story, you can find Erin enjoying time with her family, hiking, researching Utah’s history and serving within her community.

Erin loves any and all story ideas! Feel free to contact her anytime at erin.cox@fox13now.com or on Twitter @erincoxnews.