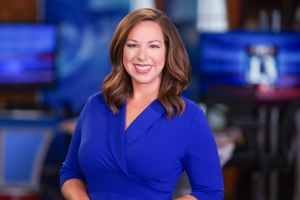 Hailey is a reporter and multimedia journalist for FOX13 News.

She is a two-time Emmy and Edward R. Murrow winning journalist from northern Utah.

Born in Ogden and raised in Roy, she’s a graduate of Weber State University.

Hailey started her career as a reporter in Idaho Falls, ID. She moved to Sioux Falls, SD where she worked as a reporter and weekend anchor/producer. During her five years in the upper midwest, she earned two Emmy trophies and two Edward R. Murrow awards for local reporting and breaking news.

A job working out of the St. George bureau for a competing Salt Lake City news station brought Hailey back to the Beehive State.

In 2019, she began working at FOX13 News. Like many Utahns, she grew up watching the station and admits to “fan girling” when talking to her coworkers.

When not working, she is playing with her dog, watching an independent film and cheering on the Utah Jazz.