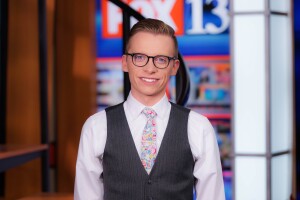 Jordan’s passion for media started in High School when he discovered he had a talent for capturing and editing video. This then led to him doing a course in Creative Media Production where he picked up skills in radio, television and print.

He graduated with honors from the University of Brighton in England in July 2015 with a degree in Broadcast Journalism. While at university he did a few internships and jobs with local and national media outlets including ITV and the BBC.

Jordan started freelancing at KSTU-FOX 13 in 2016 as an Associate Producer. You’ll see stories written by Jordan on fox13now.com as well as see and hear content produced by him on Fox 13 News.

He enjoys photography outside of work and likes to make the most of Utah’s scenic views, especially along the Wasatch Front. Jordan was born and raised in England and moved to Utah in August 2015.