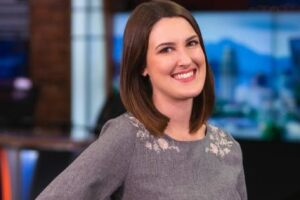 Lauren feels incredibly lucky she gets paid to do what she loves, and at such a great station! She’s a Reporter and Multimedia Journalist (MMJ), which means she’s a self-contained, one-woman-band. Lauren is just as passionate about filming and editing as she is about reporting, even if it does mean she has to lug around all the camera gear. :)

A Washingtin native, Lauren grew up in the Seattle/Tacoma area and graduated from the University of Washington. She’s a Husky through and through- purple is her favorite color and she even owns a Siberian Husky pup named Hachi!

Lauren moved to Salt Lake City from Bozeman, Montana, where she worked as a reporter, producer and main anchor for a news station. During her time there, she won an award for spot (read: breaking) news reporting and captured some incredible moments on camera. She also loved living in the beauty of Big Sky Country!

Since moving to SLC, Lauren has joined the National Press Photographers Association (NPPA) and attended a few of their conferences and workshops-- including the intensive and life-changing week-long News Video Workshop in Norman, Oklahoma. She placed 2nd in the 2019 Society of Professional Journalists Utah Journalism Awards (for Television: Spot News), and picked up Honorable Mention for an NPPA Quarterly Solo Video contest. Lauren's also been nominated for an Emmy (no Emmy award yet, but it's on the bucket list!).

Outside of work, you’ll find Lauren hiking in the mountains with her husband and two rescue dogs Hachi (the aforementioned Husky) and Maizey (little ball of fire Blue Heeler), exploring the greater Salt Lake area, planning her next trip to a foreign place, or cooking up a delicious gourmet meal. Lauren has been involved in Toastmasters International (she served as Public Relations Manager and won speech competitions and awards), and Big Brothers Big Sisters. She also loves traveling, hot springs, ghost towns, live theater, rock concerts, painting, road tripping, camping and skiing.

Have a story idea or want to get in touch with Lauren? Send an email to lauren.steinbrecher@fox13now.com, or you can find her on Facebook, Twitter and see all her travel photos on Instagram. She’d love to hear from you!