SALT LAKE CITY -- City officials are calling it one of the worst cases of hoarding they have ever seen. Crews have spent the past two days cleaning up six properties on one street that are littered with so much junk, it has been declared a health hazard.

"We have removed an excessive amount of storage," said Craig Weinheimer, an investigator with Salt Lake City's Office of Civil Enforcement.

Contractors spent Wednesday removing about 100 yards of junk that has accumulated over the years on the properties. When they arrived on Tuesday, only a small walkable path led through old cars, refrigerators and other junk. The litter spread through four houses and a duplex on this tiny street. A foul odor lingered in the air.

[Scroll down to view photos taken of the properties]

In windows of some of the homes, a bizarre collection of items: mannequins in sequined clothing looked down as crews stacked old TVs and propane tanks. In another window, a John Deere mower had been pushed up against the glass. A license plate holder ironically proclaimed: "I Want To Be Barbie: That Girl Has Everything."

"There were stacks of junk and other storage items in this area," Weinheimer said as he showed FOX 13 the cleanup effort. "Except for a footpath extending from the rear about 200 feet out to the sidewalk."

Salt Lake City officials have been out here in years past on complaints. Another complaint about junk accumulating on the property led to the city going to court after fines went unpaid. A judge signed an order to force a clean-up effort.

The Salt Lake Valley Health Department had crews on hand to assist in the cleanup. They removed about a dozen tanks of propane and other hazardous chemicals and wastes that had accumulated. A tow truck was brought in to remove the dead cars. Heavy equipment brought in trash bins and picked up old washing machines and dryers.

On the sidewalk outside one of the homes, pigeons flocked to where the owner had scattered stale bread. Neighbors said the pigeons were a frequent annoyance.

"We named our street 'Stale Street' for the stale bread that's left out," said Kyle Luntz.

The owner of the properties was seen arguing with city officials on the sidewalk outside one of the homes. He walked away as FOX 13 approached, and refused to answer the door of his home.

Weinheimer said the civil fines for failing to clean up the property after so many years has been converted to a court-ordered judgment for the owner. The cost of the clean-up will become a lien on the properties. 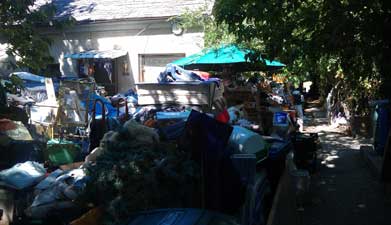