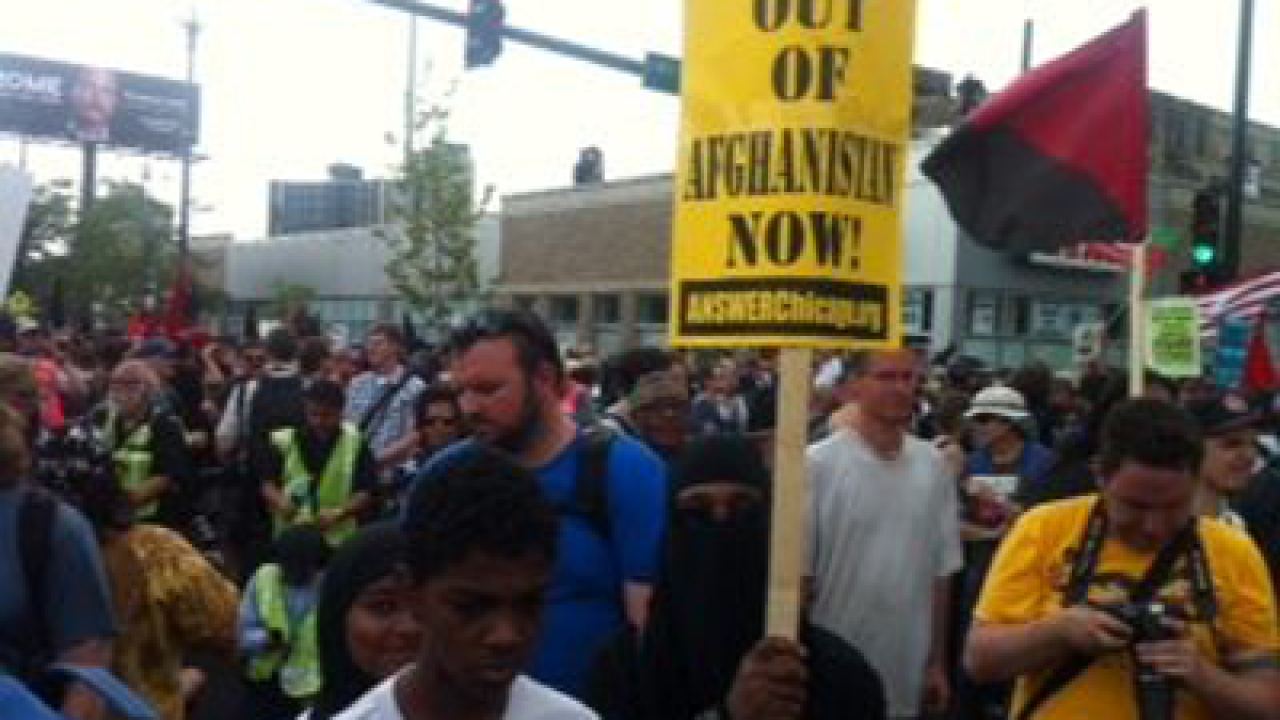 CHICAGO (CNN) — Protesters and police clashed outside the NATO summit in Chicago, where world leaders met to discuss the way forward in Afghanistan.

Police hit protesters with batons as they pushed against a line of officers, video from CNN affiliate WLS showed. The clashes came toward the end of a day of peaceful protests.

At least 45 people were arrested Sunday and four officers were taken to the hospital with injuries, said Chicago Police Superintendent Garry McCarthy.

Occupy Chicago, one of the groups that helped organize the demonstrations, similarly reported that some people were injured.

“The police have several demonstrators detained behind their lines, calling for medics. Bloodied protesters being dragged out of sight now,” the group wrote on its Twitter page earlier in the day.

An official with the city, who was not authorized to talk to the media, told CNN that between 50-75 protesters refused to leave the area.

The clashes took place just blocks from the NATO summit. Inside that meeting, U.S. President Barack Obama met with Afghan President Hamid Karzai and hosted other world leaders. He stressed that more work must be done before NATO troops pull out of Afghanistan.

“There will be great challenges ahead. The loss of life continues in Afghanistan. There will be hard days,” Obama said at the summit. “But we are confident we are on the right track and (what) this NATO summit reflects is that the world is behind the strategy we’ve laid out. Now it’s our task to implement it effectively and I believe we can do so in part because of the tremendous strength and resilience of the Afghan people.”

Obama and other world leaders were expected to draw up a road map out of the war in Afghanistan. The summit comes at a key time for NATO countries, who are trying to figure out how to meet a 2014 deadline to withdraw from an unpopular war in Afghanistan while shoring up that nation’s security forces.

“There will be no rush for the exits. We will stay committed to our operations in Afghanistan and see it through to a successful end. Our goal, our strategy, our timetable remains unchanged,” NATO Secretary General Anders Fogh Rasmussen said Sunday.

“Once the Afghans have full responsibility by the end of 2014, our combat mission will come to an end. But we will not walk away,” he added later in the day.

Also Sunday, NATO leaders inked a deal to acquire five unarmed drones as part of “smart defense,” a term used to describe efforts to do more with less at a time when many nations’ defense budgets are being slashed, Rasmussen said. More than a dozen countries will help to buy the drones.

“NATO in itself is smart defense because it is about helping each other instead of re-nationalizing defense,” said the secretary general.

Security was tight at the summit following Saturday’s arrest of three men, described by authorities as anarchists who plotted to attack Obama’s Chicago campaign headquarters and lob Molotov cocktails at police during the summit.

Two other men, not believed to be part of the alleged plot, appeared in court Sunday to face charges from “related investigations,” authorities said.

“While the cases that were charged in court today arose from related investigations, the two defendants are not charged with any involvement in the terrorist case from yesterday, and today’s cases are separate matters. The two defendants … each face their own charges arising from separate incidents,” prosecutors said.

Police insist there were no imminent threats to the leaders of more than 50 nations gathering at the summit.

The officials, speaking on condition of anonymity as a matter of practice, said the plan will also lay out NATO’s training and advisory role after 2014.

A small contingent of British forces could remain after NATO forces leave in 2014, a senior British official said. A senior U.S. official said the United Kingdom may keep some troops in Afghanistan post-2014 for counter-terrorism purposes. Both officials requested anonymity because they were not authorized to speak to the media.

One of the key issues to be considered by the NATO leaders is who will pay for the buildup of Afghan forces as ISAF draws down its troops. Afghan security forces are expected to total 350,000 by 2015, according to CNN National Security Analyst Peter Bergen.

Rasmussen said Sunday that he was optimistic that other countries will contribute.

“At the end of the day, it is less expensive to finance the Afghan security forces to do the combat than to deploy our own troops,” he told CNN’s “State of the Union.”

A Taliban spokesman said Sunday that Hollande’s declaration “is a decision based on realities and a reflection of the opinion of (his) nation.”

“We call upon all the other NATO member countries to avoid working for the political interests of American officials and answer the call of your own people by immediately removing all your troops from Afghanistan,” Taliban spokesman Zabiullah Mujahid said in a statement, describing what he said was the “savagery” of troops in Afghanistan.

“The invasion of Afghanistan by America and its allies under the banner of ‘war of terror’ was an unjustified and tyrannical action which was only carried out for political and economical gains,” he said.

Also at issue at the NATO summit is Islamabad’s continued blockade of much-needed NATO supplies shipped over Pakistani roads to Afghanistan.

Pakistan closed the ground routes after a NATO airstrike in November killed two dozen of its soldiers. NATO insists the incident was an accident.

The United States and Pakistan have not come to an agreement on the price of opening the supply lines, according to senior administration officials.

Without a deal, officials said Obama would not meet with Zardari at the summit. The two were scheduled to hold trilateral talks with Karzai on political reconciliation in Afghanistan. Pakistan’s support in reaching a deal with the Taliban is seen as critical in ending the war in Afghanistan.

Still, a U.S. official said he was confident a deal would eventaully be reached.

“We believe we are moving in the right trajectory and that we can accomplish what is a shared objective with the Pakistanis, opening the resupply lines,” said Deputy National Security Adviser Ben Rhodes.

U.S. Republican presidential frontrunner Mitt Romney was not at the summit, but he weighed in Sunday with an op-ed piece in the Chicago Tribune, arguing that many NATO countries have not contributed enough to the alliance. The Obama administration’s defense budget cuts have further fueled the problem, he said.

“The administration’s irresponsible defense cuts are clearing the way for our partners to do even less,” Romney wrote. “An alliance not undergirded by military strength and U.S. leadership may soon become an alliance in name only.”