Ryan in the political spotlight with convention speech 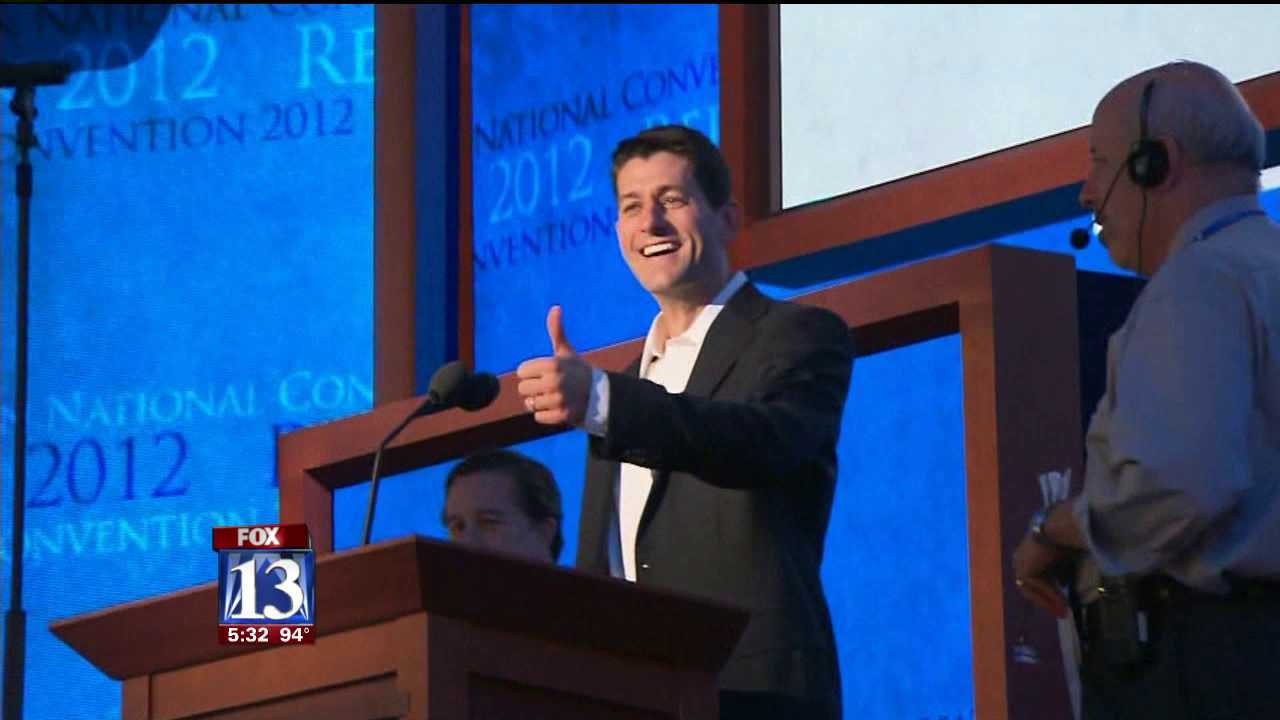 TAMPA, Florida (CNN) -- In the biggest speech of his still young political career, GOP vice presidential nominee Paul Ryan will tell the Republican National Convention on Wednesday night that time is running out to solve the nation's fiscal problems, but Mitt Romney and he can do it if elected in November.

"We will not duck the tough issues -- we will lead," Ryan will say in his prime-time address that will be televised nationwide, according to excerpts released by the Romney campaign. "... The work ahead will be hard. These times demand the best of us -- all of us, but we can do this. Together, we can do this."

Ryan's speech is part of a campaign effort to portray Romney, a multimillionaire businessman and former Massachusetts governor, as a champion of working-class Americans who struggle under the policies of President Barack Obama.

Romney chose Ryan, the conservative House Budget Committee chairman from Wisconsin, as his running mate in hopes that the fiscal expert known for big and hard-line ideas would galvanize support on the political right and appeal to moderates and independents seeking solutions for the nation's chronic deficit and debt problems.

Ryan's speech will focus on his personal background, the fiscal problems the nation faces and how he and Romney will tackle them, campaign officials told CNN on the condition of not being identified, adding that the convention theme for the day is "We Can Change It."

"I accept the calling of my generation to give our children the America that was given to us, with opportunity for the young and security for the old -- and I know that we are ready," Ryan will say, according to the excerpts. "Our nominee is sure ready. His whole life has prepared him for this moment -- to meet serious challenges in a serious way, without excuses and idle words. After four years of getting the runaround, America needs a turnaround, and the man for the job is Governor Mitt Romney."

A Republican source familiar with Ryan's speech told CNN it will "deconstruct" the Obama agenda, with particular focus on the fiscal issues that are the congressman's strength, such as the national debt, stimulus spending and his proposed Medicare reforms, which have come under attack by Obama and Democrats. According to the source, Ryan wants to be an attack dog in the speech.

Ryan will say that the 2010 health care reform law championed by Obama and passed by Democrats amounts to "more than two thousand pages of rules, mandates, taxes, fees, and fines that have no place in a free country," according to the excerpts.

"The president has declared that the debate over government-controlled health care is over," Ryan will say. "That will come as news to the millions of Americans who will elect Mitt Romney so we can repeal Obamacare."

If elected, he and Romney will confront the tough issues "before the math and the momentum overwhelm us all," Ryan will say.

In other speeches Wednesday night, Sens. Rand Paul of Kentucky and John McCain of Arizona offered biting criticism of Obama's presidency, saying the president was failing to adhere to American values.

"The republic of Washington and Jefferson is now in danger of becoming the nation of debt and despair," said Paul, the son of vanquished Republican candidate Rep. Ron Paul of Texas.

McCain, the Republican presidential candidate defeated by Obama four years ago, took aim at what he called diminishing American power and influence around the world. He accused Obama of abandoning freedom movements in Iran and Syria by not supporting protesters trying to overthrow oppressive regimes, saying "our president is not being true to our values."

"We can choose to follow a declining path, toward a future that is dimmer and more dangerous than our past, or we can choose to reform our failing government, revitalize our ailing economy, and renew the foundations of our power and leadership in the world," said McCain, a consistent advocate for a stronger military. "That is what's at stake in this election."

Former Secretary of State Condoleezza Rice will be one of the featured speakers later Wednesday.

Romney and Republicans contend that Obama's policies such as stimulus spending have worsened an already bad economic situation the president inherited from the previous GOP administration. They propose traditional conservative policies to shrink government, cut taxes and drastically reform entitlements, which they way will bring economic growth and job creation.

Obama and Democrats say such prescriptions are failed policies of the past, and call for increased revenue sources such as higher taxes for wealthy Americans to be part of a deficit reduction plan that includes continued with some spending cuts and entitlement reforms.

"On almost every issue he wants to go backwards, sometimes all the way to the last century," Obama said Wednesday at a campaign event in Virginia.

For Ryan, 42, the vice presidential nomination and convention speech mean an elevated national profile after never having a statewide race.

The convention is proceeding as Hurricane Isaac drenches the Gulf Coast after making landfall in Louisiana on Tuesday night, the eve of the seven-year anniversary of devastating Hurricane Katrina. Isaac prompted Republican organizers to postpone the first day of the convention, which is crucial for defining Romney to the American people.

Romney mentioned Isaac at a campaign event on Wednesday in Indiana, joking that he appreciated the chance to be there "on dry land."

"Our thoughts are, of course, with the people of the Gulf Coast states," he said, noting the Katrina anniversary. "We're grateful that it appears that Isaac will spare them from the kind of damage we saw during Katrina, but for many in the Gulf Coast who just finished repairing their homes and getting their lives back to normal, this must be a heavy burden. And so today our thoughts are with them, our prayers go out to them and our country must do all we can to help them recover."

GOP officials pushed ahead with a convention agenda designed to frame the election as a referendum on Obama's presidency while attempting to turn Romney's biggest political vulnerabilities into campaign advantages.

The 2,200-plus convention delegates also approved a conservative platform that calls for less government, opposes same-sex marriage and endorses a "human life amendment" to ban abortion, with no specific exceptions for cases of rape, incest or when the mother's life is threatened.

Romney and Ryan, who also was endorsed by delegates Tuesday, will be formally nominated on Thursday, and Romney's acceptance speech that night will conclude the convention with the highest-profile political moment in the former Massachusetts governor's career.

The convention seeks to portray Obama as a failed leader whose policies undermine the American dream, directly attacking the president on the issue of equal opportunity that traditionally favors Democrats.

Speaker after speaker has emphasized his or her own humble beginnings as descendants of immigrants who worked hard to achieve success for their families and never expected government help or handouts. Virtually every speaker took umbrage with Obama's comment on the campaign trail that "you didn't build that" in reference to successful businesses that received government help along the way.

On Tuesday night, Romney's wife Ann faced a similar entry as Ryan into the full-bore glare of presidential media coverage with her own prime-time speech that delivered a political broadside with a personal touch.

She mixed homespun anecdotes, such as repeated references to their first date, with references to issues considered weaknesses for her husband -- support from women and his personal wealth -- in encouraging Americans to get to know the warm and loving man she met at a high school dance.

Mrs. Romney took on another tricky political issue for her husband Wednesday when she addressed a Latino coalition and challenged the traditional support by Hispanic-Americans for Democrats, including Obama.

Meanwhile, Sen. Marco Rubio of Florida called Wednesday for a more comprehensive and moderate immigration policy by Republicans in order to make inroads with the Latino community.

The GOP platform contains traditional conservative planks on immigration and other issues, including support for the "human life amendment" with no exceptions to an abortion ban. That runs counter to overall public opinion in America, especially among women.

"In November you can say in this century women can be trusted to make their own health care choices," the president said to cheers. "You can say that in this century we don't think young immigrants who were brought here when they were children and understand themselves as Americans and have pledged allegiance to the flag should suddenly be deported to countries where they have never been."

The Obama campaign also has made an issue of Romney's personal wealth, challenging him to release more than the two years of tax returns he has made public -- as his father did in releasing 12 years of returns when running for president in 1968 -- and questioning whether his career as a venture capitalist benefited workers or prepared him to deal with a sluggish economy.

In her speech Tuesday night, Ann Romney addressed the Democratic attacks head-on, noting her husband's success throughout his career and expressing amazement that such a record was being criticized.

"If the last four years had been more successful, do we really think there would be this attack on Mitt's success?" she said.

For Romney, 65, the nomination puts him within one step of the goal he first sought in 2007 by running for president after serving as a Republican governor for four years in traditionally Democratic Massachusetts.

Though rivals challenged his conservative credentials in the 2012 primaries, Romney emerged victorious. But he continues to walk a political tightrope in trying to energize right-wing support while also appealing to moderates and independent voters.

The latest CNN/ORC International poll indicates a dead heat between Romney and Obama, with new numbers released Sunday showing that 53% of likely voters believe Obama is more in touch with their needs, compared with 39% for Romney.

Obama leads by an equal margin when it comes to being in touch with the middle class, and six in 10 say Obama is in touch with the problems facing women today, with just over three in 10 feeling the same way about Romney.

Romney leads 48% to 44% over Obama on managing the government effectively and has a 6-point advantage on having a clear plan for fixing the nation's problems. Both figures are within the survey's margin of error.