MAGNA, Utah – Unified Police are looking for a man who held up a Wells Fargo in Magna on Monday afternoon.

Witnesses say the man came into the bank 8295 West and 3500 South in Magna just after noon Monday, gave the teller a note saying he had a weapon and demanded money.

The teller complied and the suspect left the bank with an undisclosed amount of cash, got into a dark-colored early- to mid-2000s Ford Explorer with tinted windows.

“Fortunately in this incident nobody was injured, the clerk complied. But the suspect is out there. The suspect here threatened that he had a weapon. No weapon were ever displayed, but he is considered armed and dangerous,” said Unified Police Lt. Justin Hoyal.

The suspect is described as a white man, about 5-foot, 10-inches tall, 175 pounds with light brown facial hair. He was wearing a dark-colored hooded sweatshirt with a zipper up the front, dark sunglasses, Levis and light-colored tennis shoes. 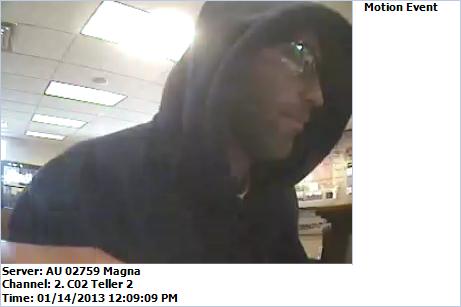