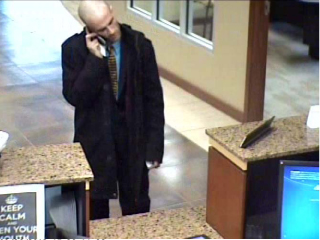 MILLCREEK, Utah – Police arrested a man who allegedly robbed a Mountain America Credit Union Thursday, and they said the same man may be involved with other robberies.

Unified Police Department officials said Friday that Cory L. Stephens, 28, was in custody for the robbery at Mountain America Credit Union as well as a robbery at Deseret Credit Union.

According to information from the Unified Police Department, officers received a call Thursday about a robbery at the Mountain America Credit Union located at 2174 East 3300 South.

The suspect entered the credit union and pretended to be on the phone, and he approached the teller and handed over a note demanding money. The teller complied, and the man fled with an undisclosed amount of money.

Police officials said there were no injuries, and the man did not display any weapons during the robbery. Officials said they believe the man is the same suspect who robbed a Deseret Credit Union in Taylorsville on Sept. 20.