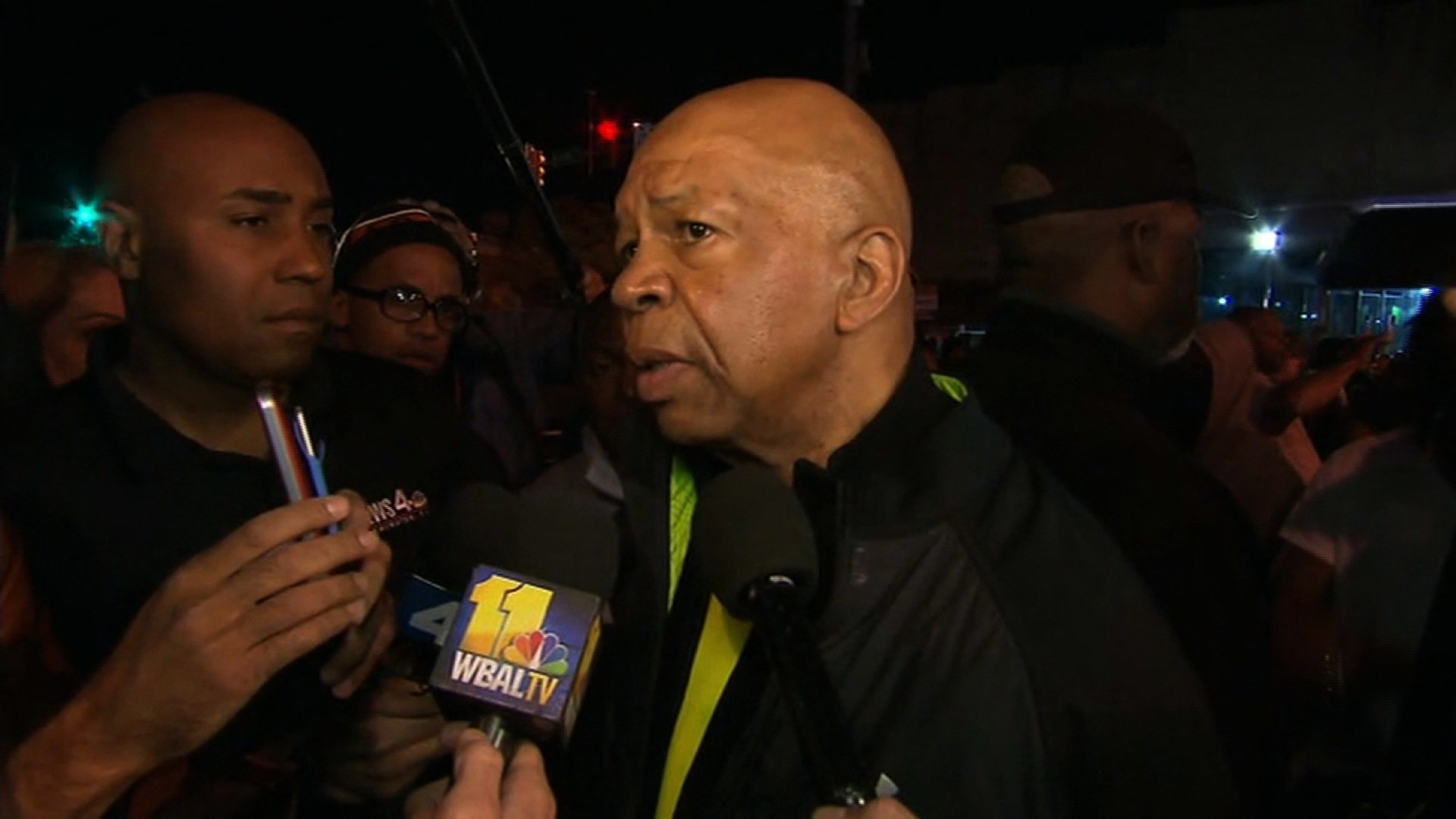 • Police said late Tuesday on Twitter they were making arrests at one location, where they said people threw bricks and rocks at officers.

• Protesters are still on the streets despite a 10 p.m. curfew. Police have said they will enforce the curfew tonight, but have a “wide range of discretion” regarding how they enforce it, Baltimore police Capt. Eric Kowalczyk said before the curfew took effect. “Officers are going to use common sense,” he said.

• A variety of voices were heard at a town hall meeting Tuesday night at the Empowerment Temple Church in Baltimore. “How would you feel at 15, and the last three years of your life, you witnessed Trayvon Martin get killed, and George Zimmerman get off scot-free. And then within 18 months, you hear Michael Brown get killed, and Darren Wilson walk. Then you turn around and you hear Eric Garner cry out 11 times, ‘I can’t breathe,’ and watch this — you watch him die, and nobody has any consequence,” said the Rev. Jamal Bryant. “At 40, you adjust to dysfunction. At 14, you reject it.”

• Some 2,000 National Guardsmen and more than 1,000 police officers from Maryland and neighboring states will be in the streets of Baltimore on Tuesday night, Maryland Gov. Larry Hogan said. “This combined force will not tolerate violence or looting, which has led to the destruction of property and put innocent Marylanders at risk.”

A citywide curfew took effect Tuesday night in Baltimore, where brooms have replaced bricks after a night of riots.

Laquicha Harper, a 30-year-old resident, called the violence embarrassing and heartbreaking, saying: “We owe it to ourselves to do better.”

She was among those who responded to clean up the mess from Monday’s violence.

Cars and building were burned. Police were hospitalized, businesses were looted, and hundreds of people were arrested.

“I understand that everybody is upset, I understand that tension is brewing … I’m here, I get it,” Harper said. “But there are better ways that we can handle our frustration. And they can’t hear us when we’re behaving this way.”

President Barack Obama said Tuesday that “some police aren’t doing the right thing” and that a lot of the tension between law enforcement and the black community stems from “a slow-rolling crisis” that has been brewing for decades.

Fixing it will require more investment in cities, criminal justice reform, better funding for education and soul-searching for some police departments, he said.

Still, no angst can excuse what Obama called the behavior of “criminals and thugs who tore up” Baltimore.

“When individuals get crowbars and start prying open doors to loot, they’re not protesting. They’re not making a statement. They’re stealing,” he said. “When they burn down a building, they’re committing arson. And they’re destroying and undermining businesses and opportunities in their own communities. That robs jobs and opportunity from people in that area.”

Protesters rallied and marched Tuesday. Baltimore Police Capt. Eric Kowalczyk described them as peaceful, which he said is “what we’re used to seeing in Baltimore.” That said, about a dozen people had been arrested, according to the police captain.

Tuesday night, a group started attacking officers with rocks and bricks, and more arrests were made, police said.

Maryland Gov. Larry Hogan said at noon that he didn’t know of additional instances of looting, damage or violence. But he was mindful that may not be true for long, and said he’s especially concerned about Tuesday night.

If there is another flare-up, Hogan said, authorities will be prepared with “as much manpower and as many resources as we can (have).”

Hogan declared a state of emergency Monday evening — after a request from Baltimore’s mayor around 6 p.m. — that, among other things, expedited the deployment of hundreds of National Guard members. Up to 5,000 of them are ready to answer the call to join Baltimore police and up to 5,000 law enforcement officers were requested from around the Mid-Atlantic region, said Col. William Pallozzi of the Maryland State Police.

Rawlings-Blake has imposed a mandatory curfew from 10 p.m. to 5 a.m., which is one reason why the Baltimore Orioles postponed their Tuesday night game and the Baltimore Ravens called off an NFL draft party set for Thursday night.

Wednesday’s game between the Orioles and Chicago White Sox will be closed to the public, the Orioles announced. A source within Major League Baseball told CNN the league is not aware of any prior closed-door games in major league history.

There was no public school Tuesday, nor were there classes at Johns Hopkins University. Baltimore City Public Schools will reopen on Wednesday.

“Seeing my city like this breaks my heart. But, like so many Baltimoreans, my resolve is strong,” the mayor tweeted. “We will not let these deplorable and cowardly acts of violence ruin #OurCity.”

Meanwhile, citizens young and old are stepping up. They include people who came out to clean up, like Harper and 15-year-old Sulaiman Abdul-Aziz, who said he saw some of the mayhem.

“I felt disappointed,” Abdul-Aziz said, “because a lot of that could have been avoided if people would have started thinking before they would have done all that stuff.”

‘Broken windows are not broken spines’

The tensions in Baltimore come after demonstrations across the country over the deaths of black men after encounters with police, including Michael Brown in Ferguson, Missouri; Eric Garner in New York; and Walter Scott in North Charleston, South Carolina.

This latest eruption came after days of protests over Freddie Gray, who mysteriously died on April 19, a week after Baltimore Police arrested him. Anger over his plight may have spurred Monday’s violence, but Baltimore City Council Member Brandon Scott said it was also fueled by “a long, long, longstanding issue with young African-Americans.”

“We’re talking about years and decades of mistrust, of misfortune, of despair that it’s just coming out in anger,” Scott said. “No, it is not right for them to burn down their own city. But that is what’s coming out of these young people.”

At least 20 officers were wounded in the unrest, according to Capt. Kowalczyk. One person is in critical condition as a result of a fire, he said.

“It’s clear that what we have to do is change the culture within the Baltimore Police Department,” Baltimore Police Commissioner Anthony Batts said Tuesday. The process has been underway for more than two years, but there is more to do, he said.

Deray McKeeson, a community organizer who was active in Ferguson and is now in Baltimore, said that while he doesn’t condone using destruction and violence, he understands it as a way some vent frustrations. “Broken windows are not broken spines,” he said.

McKeeson said the Baltimore vandalism, even the injuries to some officers, doesn’t compare to the lost lives of Gray and other blacks at the hands of police. That’s why he said protesters will remain out in full force, rallying against what they see as systemic injustice.

“Police have continued to kill people,” the activist said. “Tonight will be another night where people come out into the streets to confront a system that is corrupt.”

‘Dark day for our city’

There were many other secondary casualties — people who saw their neighborhoods torn apart, their homes and vehicles damaged, their hopes for stability and progress thwarted by the mayhem.

They were people like Cindy Oxendine, who took to the streets to sweep up rocks, glass and more despite her aching back.

“It started off peaceful, and it ends up like this,” Oxendine told CNN affiliate WBAL. “… I’ve seen stuff like this on the news in other cities, but I never thought I would see it in front of my doorstep. It’s crazy.”

In addition to the clashes with police came the flames, and investigators from the federal Bureau of Alcohol, Tobacco, Firearms and Explosives are joining local authorities to look into arson, a federal law enforcement source said.

The same source said that dozens of fires that erupted around Baltimore appear to be tied to the unrest. This includes one that consumed an affordable housing center for seniors that was just months away from opening.

Pastor Donte Hickman of the Southern Baptist Church, which owns the facility, said 60 units of senior housing were lost.

“What happened … destroyed so much of the progress that the people who actually live here have been working for,” said Mayor Rawlings-Blake, calling Monday “a very dark day for our city.”

But she found light in what she saw Tuesday.

“Today, I think we saw a lot more of what Baltimore is about. We saw people coming together to reclaim our city, to clean our city, and to help heal our city. I think this can be our defining moment,” the mayor said.