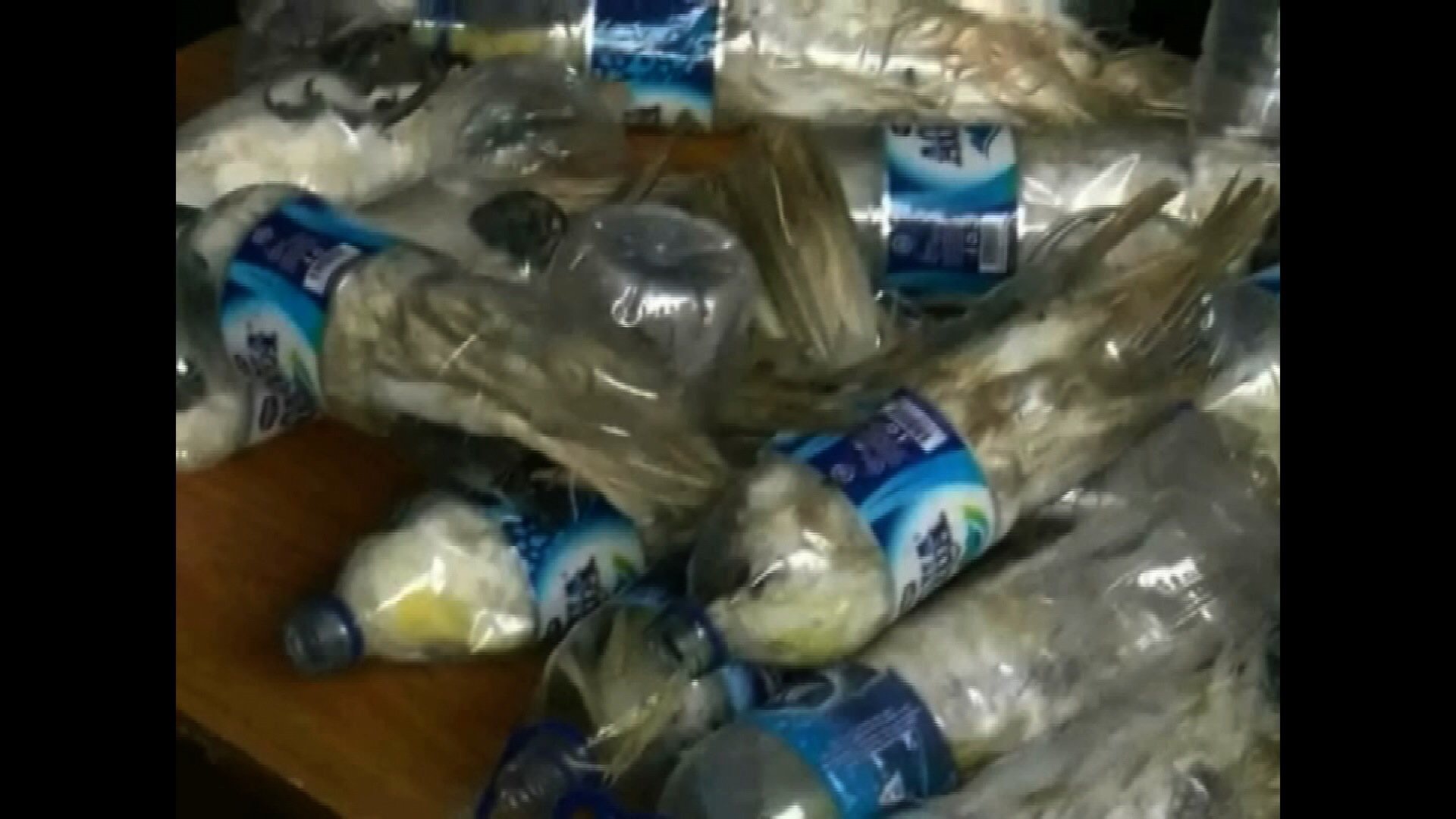 The cockatoos, which are described as critically endangered, were cut free of their plastic confines by Indonesian customs officials at Tanjung Perak port in Surabaya, Indonesia, after they spotted the consignment of illegally-trafficked birds.

“The birds were still alive then but some were already very weak.” – Lily Djafar

“The birds were still alive then but some were already very weak,” Lily Djafar, spokeswoman for the Tanjung Perak police, told CNN.

It was not the first case of its kind, she said.

In April, there were two cases of animal smuggling at the port and more than 200 rare and endangered animals, including birds of paradise, reptiles, sugar gliders — known locally as tupai loncat — and cockatoos were seized.

In both cases, the suspects were boat crew members, Djafar said.

An official from Indonesia’s Natural Resources Conservation Agency (BKSDA), told CNN that police turned over 22 birds to the organization, and that from his initial inspection the animals were two species of cockatoo. Seven of the birds handed over later died.

Richard Thomas, Global Communications Co-ordinator at Traffic International, which monitors illegal wildlife trade, told CNN that the reported trafficking of them in plastic bottles “shows the lengths that some people will go to try to smuggle birds.”

The bird is one that is “very heavily impacted” by illegal trade, he said. While the species is endemic to Indonesia, it’s disappeared from much of its range and now the only substantial population is found on the island of Komodo, with smaller populations on some other islands.

Yellow-crested cockatoos, which were among the birds seized, were classed as critically endangered by the International Union for the Conservation of Nature and Natural Resources in 2007.

The species, Cacatua sulphurea, has “suffered (and may continue to suffer) an extremely rapid population decline, owing to unsustainable trapping for the cagebird trade,” according to Bird Life, an online reference for ornithologists. It is thought that their population in the wild numbers around 7,000 and is in danger of further deescalation.

A report by Indonesia’s Natural Resources Conservation Agency (BKSDA) in 2013 found that, even then, populations in the country were critically low, due to rampant illegal hunting, and also due to their low reproductive rates.

Wildlife smuggling in Indonesia is big business, and animals captured in the lush forests — which are also rapidly declining due to deforestation — are often sold overseas to meet demand for exotic pets or for meat and medicinal purposes.

“(The yellow-crested cockatoo is) a breed that is at very serious risk because of excessive trafficking of wild populations,” Traffic’s Thomas said. “Most of those birds are destined to be trafficked to parrot collector and breeders, rather than the meat market.

“There’s a lot of demand for parrots and cockatoos in southeast Asia and Europe,” he said. “They could well have been destined for markets there, although obviously it’s illegal for wild-caught birds to be exported.”

The pangolin, according to National Geographic the world’s most-hunted mammal, is poached by the thousand to feed Chinese and Vietnamese demand for its flesh and its scales, which are a key ingredient in traditional Chinese medicine.

“The raging practice of online wildlife trade has become a serious threat for wildlife conservation, because most of the traded animals were captured from the wild, not from captive breeding as claimed by many dealers,” Swasti Prawidya Mukti, campaign officer for Profauna, a nonprofit working for the protection of forest and wildlife in Indonesia, said in a statement in January.

“Wildlife crime has become a transnational business. Therefore, governments should take this more seriously as such act… clearly (violates) our national law.”