LEHI, Utah --Police have identified a woman killed after a FrontRunner train crashed into the pick-up truck she was riding in with her husband in Lehi Saturday evening.

The crash took place around 6:15 p.m. at the railroad crossing on 500 West 100 North. Darrell North, 83, was driving the truck when the vehicle somehow ended up in-between the crossing gate and the tracks before the train plowed right into it.

Darrell North's wife, Barbara, 71, was sitting in the passenger seat.

The passenger-side door of the truck took the brunt of the hit. Barbara North suffered head injuries and was flown to Intermountain Medical Center in Murray, where she later died.

As of Sunday morning, Darrell North was still in critical condition but improving.

There were about 90 people on board the train. According to passengers, it was going between 30 and 40 miles per hour at the time of the crash.

"We just felt a big jolt, and immediately felt and smelt some smoke," passenger Gus Sopena said. "We knew something was going on, we felt the train come to a quick stop hitting the brakes really fast even though we were just at the last station. Next thing we know, we saw police officers here and everybody running toward the scene."

According to police, no one on the train was hurt, but they were shaken up.

"Nobody was really injured from our vantage point so it was kind of just a quick little jolt, I know someone on board had mentioned they had a little bit of whiplash but that's about the only thing we really heard," Sopena said.

The crash occurred just a block away from the Lehi rodeo grounds, where a rodeo was taking place. This caused traffic delays for hundreds of cars and people attempting to get to the rodeo.

Everyone onboard the train had to get off, and then UTA loaded them onto buses where they were taken to the next FrontRunner station. 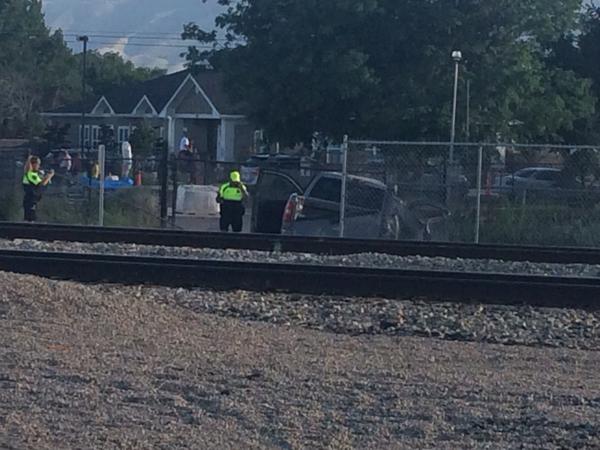