What happens when a python eats a porcupine

WARNING: Some of the pictures below could be considered graphic to some audiences. Viewer discretion advised. 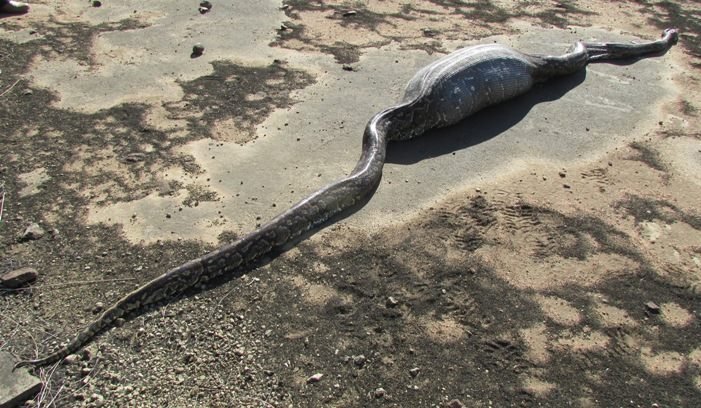 A huge snake’s big meal in South Africa has turned out to be its last.

After the death of a 12-foot-long African Rock Python, park rangers opened its stomach. Inside they found a 30-pound porcupine.

Its needle-sharp quills seem to have punctured the snake’s digestive tract and may have contributed to its death.

The engorged snake was first spotted by a mountain biker in the Lake Eland Game Reserve, about 100 miles south of Durban, two weeks ago.

Visitors showed up at the park to observe the snake and to speculate what it had eaten. On its Facebook page, the Game Reserve had its own guesses: a small warthog or impala calf.

When the snake died this week, curious park rangers performed a necropsy, or autopsy, on the animal.

Though the exact cause of death is unknown, spectators and the porcupine may be to blame.

“With all the human interaction, this could have caused stress and the python would then regurgitate the meal up with all the quills causing a problem,” said game reserve manager Jennifer Fuller.

Pythons, which are some of the largest snakes in the world, kill their prey by constriction.

Some species are known to eat animals as large as antelope or deer. Their prey is swallowed whole and may take days or weeks to digest fully.