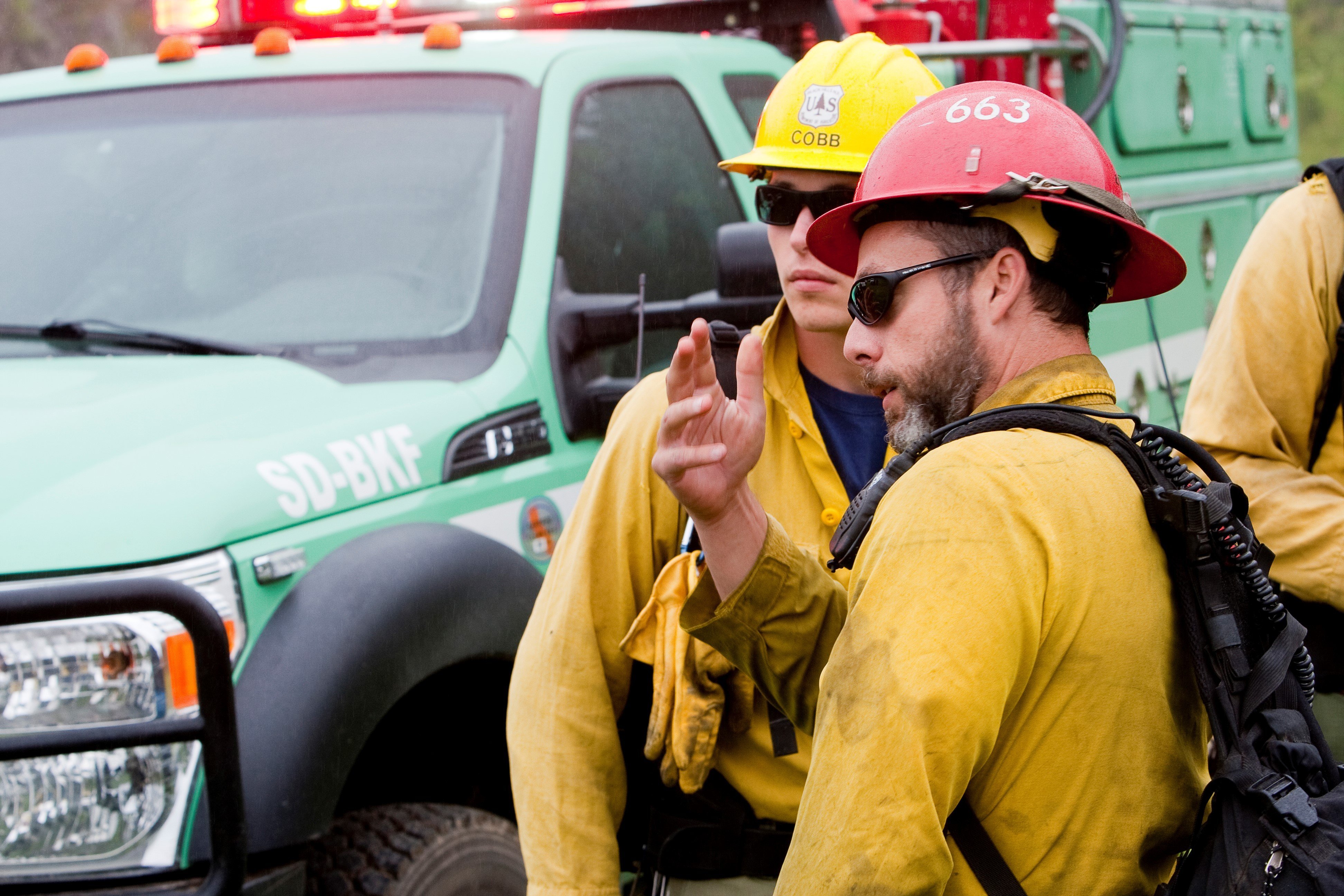 (CNN) — A firefighter battling one of the large wildfires burning in California died in the line of duty this week, the U.S. Forest Service said.

David Ruhl of Rapid City, South Dakota, lost his life fighting the Frog Fire in far northern California’s Modoc National Forest, near Adin. Rescuers found his body Friday morning after searching for him through the night, the Forest Service said.

Ruhl, survived by a wife and two children, had been on temporary assignment in the area since June. The Forest Service didn’t release details about his death, adding that it was under investigation.

In all, 9,000 firefighters worked 24 large fires Saturday in California, where a four-year drought has created ideal conditions for a wildfires, said the state agency Cal Fire.

The fires ranged in size. The deadly Frog Fire, for example, consumed at least 800 acres since it was spotted Thursday. Among the bigger blazes, however, was the Rocky Fire that burned 22,500 acres in Lake County, and it raged uncontrollably Saturday, with containment only at 5%, authorities said.

Cal Fire says most of the fires are over 60% contained. However, the land damage has been substantial in some cases. Fires in Southern California’s San Bernardino County and northern California’s Alpine county have incinerated nearly 50,000 acres.

The Rocky Fire in northern California has destroyed 28 structures and put another 6,100 under threat, said Dominic Polito, spokesman for firefighters battling the flames. At least 1,000 people were under a mandatory evacuation order, Cal Fire spokesman Daniel Berlant said earlier.

The fire’s location in steep terrain is making work difficult for the more than 2,000 firefighters assigned to it.

In some areas, firefighters were surrounding homes to defend them as the fire passes, Polito said.

Some Lake County residents are carrying on as usual amid the precarious conditions.

“We can see the smoke and it appears to be blowing near us but there are no evacuations here that I know of. We are open for business and hoping the wind blows the other way because we have two tournaments tomorrow,” said Ted Mattila of Buckingham Golf and Country Club in Kelseyville.

The fire had been moving toward west toward some towns, but cool offshore winds Friday night into Saturday were pushing it back to the east, Polito said.

“But with the cool air in the night, it is going to the east now, and we’re hoping that it stays going that way for a little while,” Polito said Saturday morning.

California’s record-setting drought, entering its fourth year, has “turned much of the state into a tinderbox,” Gov. Brown said.

Temperatures in Sacramento and other areas of northern California, where many of the fires are located, have topped 100 degrees recently. And while temperatures are cooling this weekend in Lake County, “conditions are so dry from the drought that won’t do much to stop the fire,” Berlant said. His department is urging extra caution for residents and visitors.