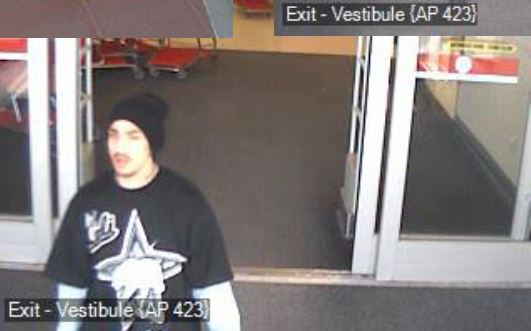 WEST JORDAN, Utah — Police are asking the public for help identifying a man who robbed a woman at gunpoint in the parking lot of a department store in West Jordan Friday afternoon.

According to the West Jordan Police Department, the robbery occurred at 1:10 p.m. in front of a Target at 7779 South Jordan Landing Boulevard.

The suspect approached a woman as she was getting into her vehicle, brandished a handgun and demanded her purse. After she complied, the suspect fled the area in a maroon Chevy Impala.

Police state the suspect is a male, possibly Hispanic, with thin facial hair believed to be in his 20s. He was wearing blue jeans and a black T-shirt with white writing on it over the top of a light-colored long sleeve shirt. He was also wearing a dark-colored beanie.

The suspect and the vehicle he left in are pictured above. Anyone who recognizes the man or who has knowledge of his whereabouts should call West Jordan PD at 801-840-4000 and reference case No. 16H002489.