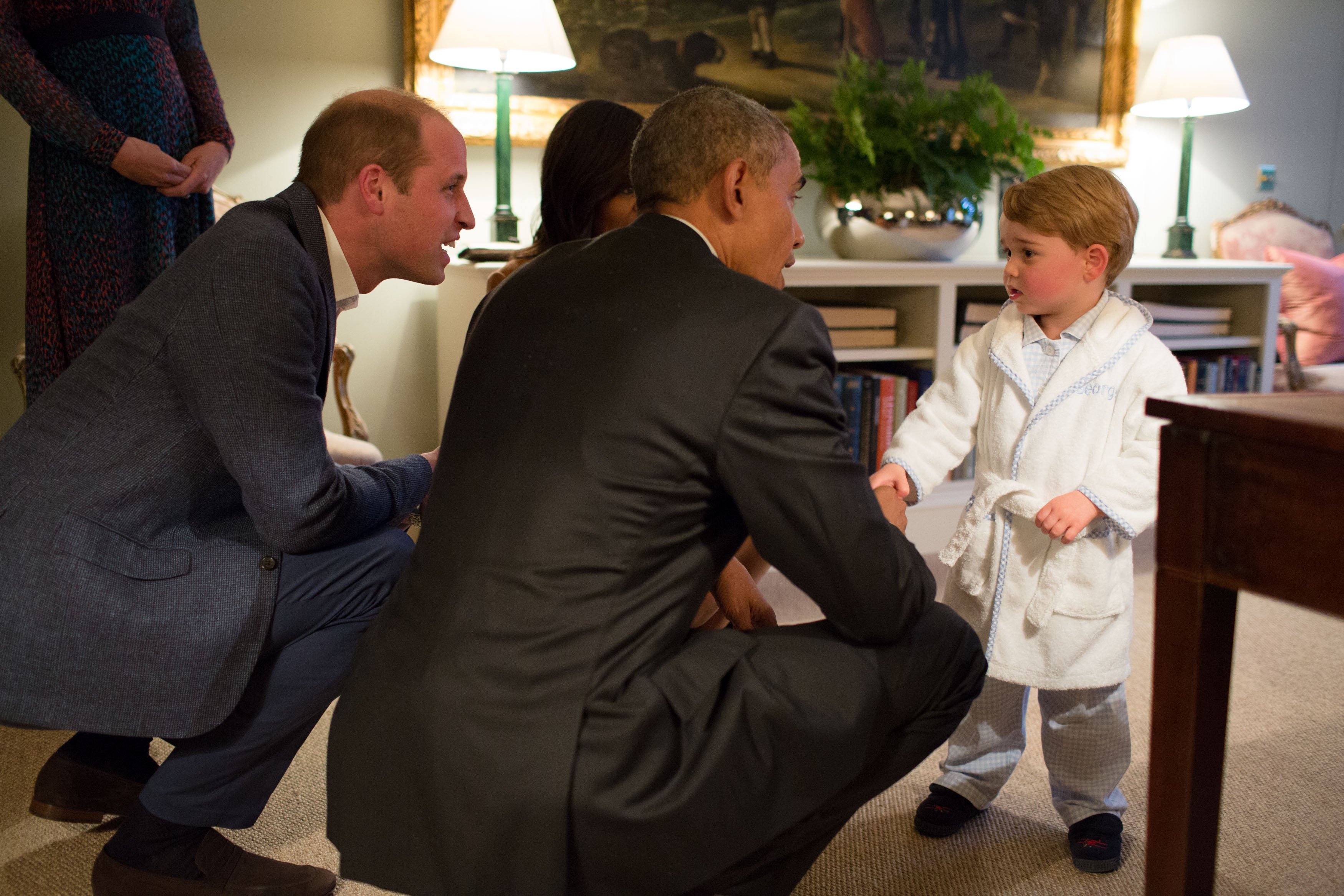 LONDON (CNN) — He may not have been toting a cupcake with a candle, but President Barack Obama nonetheless made a showy entrance to Windsor Castle on Friday for a celebration of Queen Elizabeth II’s 90th birthday.

Obama was kicking off a day of royal events that included a bedtime greeting for the young Prince George, third in line to the throne.

The President’s first stop Friday: Windsor Castle, outside London, for a birthday lunch with the Queen. Not letting the rotor wash of Obama’s Marine One helicopter deter her from offering a warm welcome, the new nonagenarian strode out onto the grass alongside husband Prince Philip to offer a handshake. Under gray skies, the monarch wore a floral silk scarf to protect her from the wind as she greeted Obama and the first lady with a smile.

The foursome piled into a Range Rover, which Philip drove himself the short distance from the Windsor lawn to the Sovereign’s Entrance in the castle’s Quadrangle. Obama — ordinarily ensconced in the back seat of a heavily armored limousine — sat up front.

With her bonnet removed, the Queen emerged from the backseat of the vehicle and led the first couple into her main residence. Soon the group was seen strolling along a palace hallway, the Queen introducing the President to her ladies-in-waiting and personal secretary.

As they stepped into the white-paneled Oak Room for a photo op, the queen noted the room was “full of mirrors,” complicating staged photos.

“Where do you want me?” Obama inquired.

“Just here, don’t you think?” the Queen said, gesturing toward a spot in front of a roaring fire between a pair of sofas. “Back to the mirror.”

A moment passed before a voice called, “Thank you, your Majesty.”

Then it was off to lunch.

Afterward, the White House said Obama presented the Queen with an album of photos depicting her past meetings with American presidents dating back to Dwight D. Eisenhower.

It was only the first of two royal engagements for the President and first lady in London on Friday. In the evening, they called on Kensington Palace, in central London, for a small dinner with the Duke and Duchess of Cambridge and Prince Harry.

After polite handshakes in steady rain, the quintet walked indoors, where Prince George was spied waiting.

“Oh look at you,” Obama proclaimed before the door was shut. Later, a Kensington Palace official said the young prince was allowed to stay up fifteen minutes past his bedtime to greet the President and First Lady.

Later, photos showed the Obamas with the young royals in a palace sitting room, chatting animatedly as a stuffed toy Portuguese Water Dog (the breed the Obamas’ own) rested nearby. It was a gift from the First Family.

It’s not the first time Prince William, Kate and the Obamas have met in London. The last time the first couple traveled to the United Kingdom together, in 2011, they greeted the recently wed Kate and William at a reception in their honor at Buckingham Palace.

The hospitality has been reciprocated in the States. Prince Harry surprised a gathering of military families during a visit to the White House in 2013, and William was granted an Oval Office sit-down with the President in 2014 to discuss his efforts to combat wildlife trafficking.

Elizabeth hasn’t visited the White House during Obama’s tenure, though he’s been her guest in London twice. They also met during the D-Day anniversary celebrations in Normandy in 2014.

During the Obamas’ first visit with Queen Elizabeth, in 2009, the pair ruffled some feathers when the First Lady put her hand around Her Majesty’s back — a break from the normal procedure of avoiding touching the monarch. Michelle Obama was also criticized for wearing a cardigan.

This time there didn’t appear to be any awkward clutches of the Queen, and the First Lady wore a knee-length purple dress — designed by de la Renta himself.