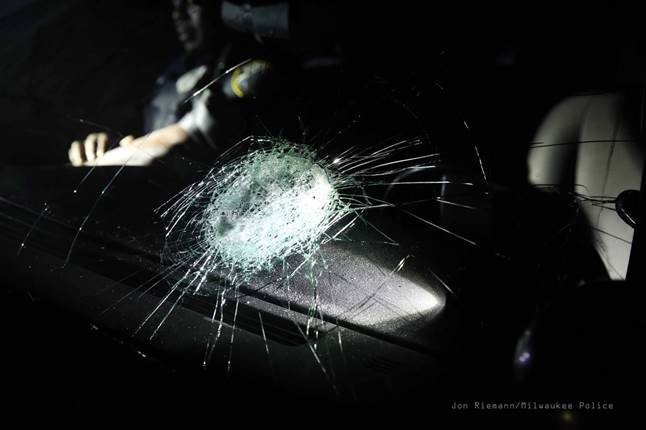 MILWAUKEE, Wisconsin (CNN) — After a weekend of furor, violence and calls for peace, Milwaukee residents struggle to find calm in a city long marred by racial tensions.

The turmoil ignited after Saturday’s shooting death of an armed African-American man, Sylville Smith, by a black police officer.

More chaos took place during a protest early Monday in northern Milwaukee when bullets and other objects flew. Shots rang out in three locations, and an 18-year-old man who was struck in the neck has been hospitalized, police said.

At least seven officers were wounded, including some who were hit by rocks and bricks, police Chief Edward Flynn said. One officer suffered injuries from glass fragments in the eye after someone threw a concrete brick through the window of a squad car.

Another car was set ablaze during the fracas.

The damage was not as extensive as the havoc wreaked Saturday night into Sunday morning when protesters torched six businesses, including a gas station. They also burned cars and threw rocks at officers. Four officers were injured and 17 people were arrested then, Mayor Tom Barrett said.

The police chief implored unruly protesters to stop the destruction and lamented the loss of jobs from torched businesses.

“The goal is to make the city safe and not to win a fight,” Flynn said.

The turbulent weekend prompted Wisconsin Gov. Scott Walker to declare a state of emergency, but the National Guard was not deployed Monday as local police tried to restore order. A 10 p.m. curfew was instituted for people under 18.

The tumult was confined to the northern Milwaukee neighborhood of Sherman Park, which was closed at 6 p.m. Monday, prompting demonstrators to relocate to a park adjacent to the gas station.

By Monday night, tensions appeared to level off, with the exception of a few brief clashes between protesters and police at the park. Otherwise, a prayer vigil led by members of a local church and the Salvation Army continued without incident.

Smith’s encounter with police began when a pair of officers stopped him and another person in a car Saturday afternoon, police said. The men fled the car, and the officers followed, shooting Smith in the arm and chest when he failed to put his gun down, Barrett said.

Smith’s handgun, along with 500 rounds of ammunition, were stolen during a burglary in nearby Waukesha in March, police said.

Police body camera footage showed Smith holding a handgun during the encounter, Barrett said. Police said the officer shot Smith after he failed to comply with orders to put his gun down. His gun was loaded with 23 rounds, more than the officer was carrying.

Smith died at the scene, and no officers were injured. The unidentified officer who shot the fatal rounds is 24 and has six years of service with the Milwaukee police — three as an officer. He will be placed on administrative duty during an investigation.

Smith’s sister Kimberly Neal mourned a brother she described as a high school graduate who played basketball, not a “man with a lengthy arrest record” described by police.

“He should have been tased, if anything,” she said. “We want everybody to feel our pain.”

By state law, the Wisconsin Department of Justice will lead the investigation. Wisconsin was the first state to enact a law requiring an independent investigation of a death involving law enforcement, the governor said.

‘Worst place to live for African-Americans’

Alderman Khalif Rainey said the area has been a “powder keg” for potential violence throughout the summer.

“What happened … may not have been right, and I am not justifying that, but no one can deny the fact that there are problems, racial problems in Milwaukee, Wisconsin, that need to be rectified,” Rainey said. “This community of Milwaukee, Wisconsin, has become the worst place to live for African-Americans in the entire country.”

Rainey said Saturday’s violence was a byproduct of inequities, injustice, unemployment and lack of educational opportunities.

“Something has to be done to address these issues,” he said. “The black people of Milwaukee are tired; they are tired of living under this oppression. This is their life.”

Statistics back up Jackson’s claim. Milwaukee is the most segregated major city between black and white residents, according to a city of Milwaukee health assessment.

White residents from suburban Milwaukee often avoid the northern, mostly black part of the city, driving around it.

Residents also took to the streets with trash bags, brooms and shovels to sweep up debris from torched businesses.

Tensions on Sunday gave way to prayers as activists gathered to call for peace.

A group of about 100 gathered at a park near the BP gas station that was burned during Saturday’s protests. Community and church leaders led a prayer circle and spoke of a community that needs healing from ongoing “racism, injustices and oppression.”

The mayor said the destruction from the weekend was “unlike anything I’ve seen.”

“I hope I never see it again,” Barrett said. “A young man lost his life … and, no matter what the circumstances, his family must be hurting.”