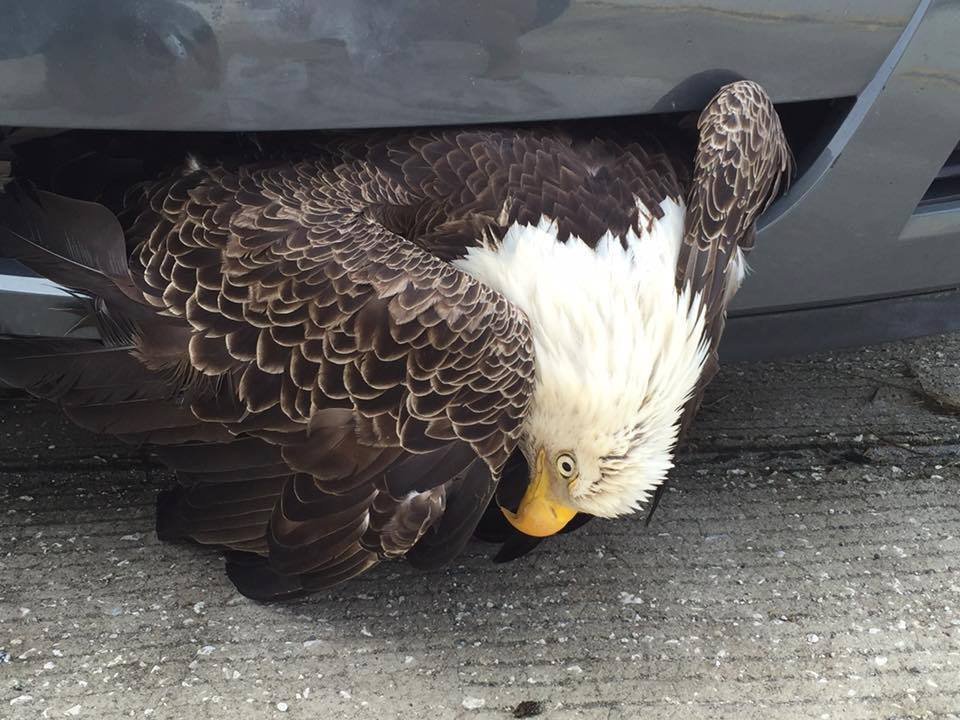 (CNN) — In the aftermath of Hurricane Matthew’s path through Florida, it may have been the oddest call to 911 operators: a bald eagle had gotten stuck in the grille of a car.

A posting on the Clay County Sheriff’s Office Facebook page Saturday reported the odd emergency request from a driver in the area near Jacksonville.

Pictures showed the national bird of the United States stuck in the precarious position.

Clay County officials said the bird was pulled out and turned over to an organization in nearby Talbot Island, Florida, called B.E.A.K.S. — Bird Emergency Aid and Kare Sanctuary.

BEAKS’ owner, Cynthia Mosling, told CNN that the eagle appears to be a mature male, at least 7 years old.

Mosling said that a driver at an intersection noticed an odd shape in an oncoming car’s grille. Mosling said the driver thought it was a prop — but then noticed a head moving.

The driver then chased down the car, notified the driver that he had a bird stuck in his grille and then called 911, according to Mosling.

The bird’s rescuers named him Matthew, in honor of the storm.

Matthew is “standing up and alert” and doesn’t seem to have any serious injuries, Mosling said.

Mosling, who evacuated inland this week, says she plans to bring Matthew back to her sanctuary, give him a checkup and will let him go if all is good.
The-CNN-Wire
™ & © 2016 Cable News Network, Inc., a Time Warner Company. All rights reserved.