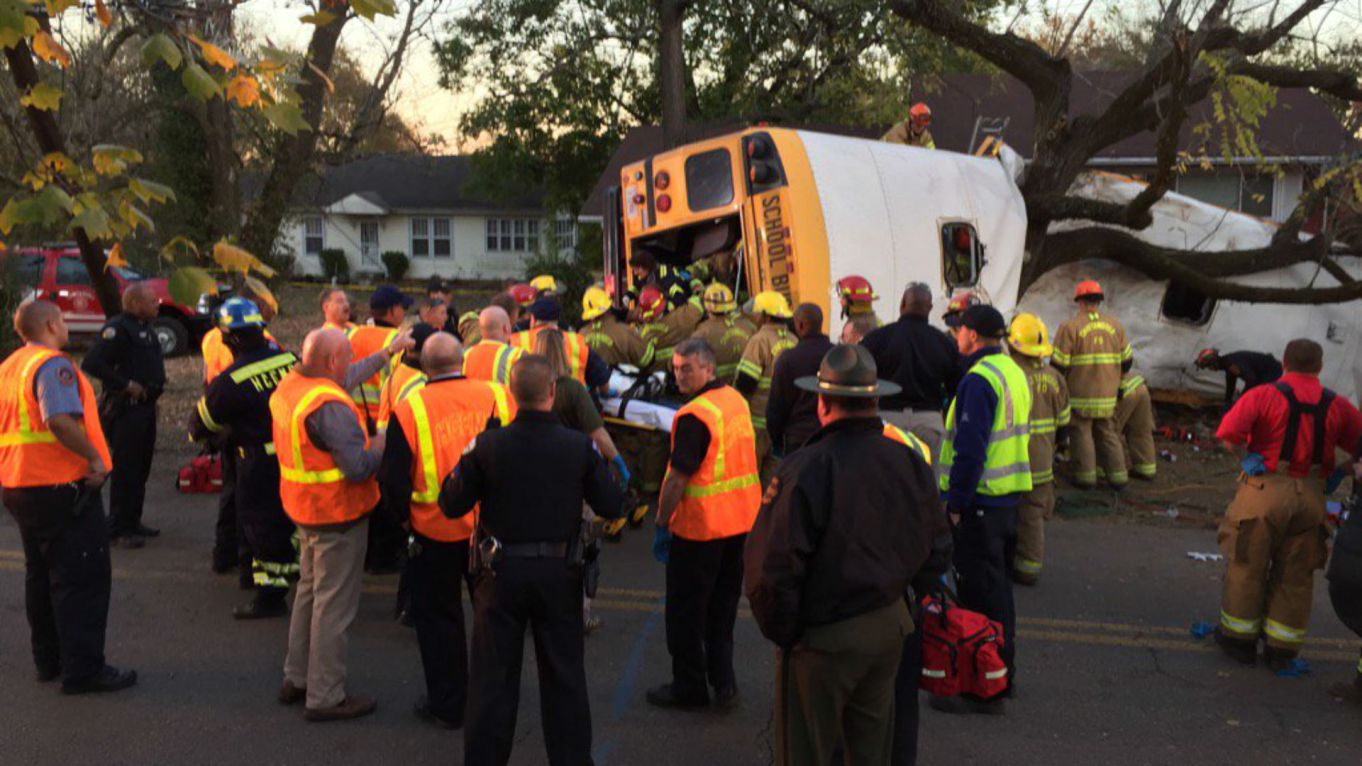 Authorities have arrested the driver of a school bus that flipped onto its side, slammed into a tree and split apart, killing at least five children in Chattanooga, Tennessee.

“Five is a cursed number in our city right now …. We are again dealing with an unimaginable loss,” Mayor Andy Berke said Tuesday morning. “The most unnatural thing in the world is for a parent to mourn the loss of a child.”

Of the five children confirmed dead after the Monday afternoon bus crash, three were fourth-graders at Woodmore Elementary School, one was a first-grader and one was a kindergartner, according to Kirk Kelly, interim superintendent for Hamilton County Schools. Six students remain hospitalized in the intensive care unit, and six are in regular rooms at the hospital, Kelly said.

A spokeswoman from the Hamilton County district attorney’s office earlier released a higher death toll, saying at least five children had died on the scene, and one had died at a hospital.

The bus driver, Johnthony Walker, 24, has been charged with five counts of vehicular homicide, reckless endangerment and reckless driving. He could face more charges as the case proceeds to a Hamilton County grand jury, Chattanooga police Chief Fred Fletcher said.

Walker has been cooperative and talking to investigators, police said.

“There are still some unanswered questions at this time, but our priority remains with our students,” Kelly said Tuesday morning, adding that counselors would be at the school for anyone who needs to talk.

“There are no words that you can say,” Kelly said Tuesday morning. “This is something that you’ll never get over … but we’re just doing what we can and reaching out and offering words of comfort and support to the families.”

Authorities received a call about the crash just before 3:30 p.m. Monday. Emergency officials worked for “many hours” to remove all the children from the bus, Fletcher said. Twenty-three victims were transported to Erlanger Hospital in Chattanooga and one was taken to another hospital, the chief said.

Fletcher said the bus, which was carrying students in kindergarten through fifth grade, turned over on its side and struck a tree.

One of the children who was on the bus told CNN affiliate WDEF-TV that the bus was traveling at high speed just before the crash. “He was going real fast and he hit a garbage bag,” the boy said. “And we then hit a mailbox, then we flipped over and hit a tree real hard.”

The children at the accident scene looked shell-shocked. Some were visibly injured and crying.

Speed is a possible factor

A National Transportation Safety Board team is expected to arrive in Chattanooga on Tuesday morning, Chairman Christopher Hart told reporters.

“Certainly, speed is being investigated very, very strongly as a factor in this crash,” Fletcher said, adding that the investigation was still at an early stage.

He added that driving conditions were clear and dry. No other vehicles were involved in the crash.

Fletcher said “a warrant has been issued to remove the informational box on the school bus and review the video.”

He added: “Our thoughts, our prayers and all of our efforts are with the families of these children and others impacted by this tragedy.”

A woman who lives near the crash told WDEF the impact was so powerful it knocked her power out.

“I just heard a big boom,” the woman said.

Fletcher, in a press conference, called the crash site “a complicated crime scene” that covered a large area.

“What has happened today is every public safety official’s absolute worst nightmare, but that is nothing in comparison to the nightmare that families and friends and our community is going through with this tragic loss to children in our community,” Fletcher said.

A tweet from the Chattanooga Fire Department showed the bus on its side against a tree as emergency officials extricated the last patient through the back door.

Sen. Bob Corker of Tennessee called the crash “heartbreaking” in a tweet.

Blood Assurance, a local blood bank, extended its hours at three locations as “hundreds and hundreds” of donors flocked to give blood to treat crash victims, spokeswoman Mindy Quinn said.

“We have had people who were refusing to leave until they give blood,” Quinn said.

She said they were fast-tracking O-negative donors and trying to schedule donors for the days ahead and into next week.