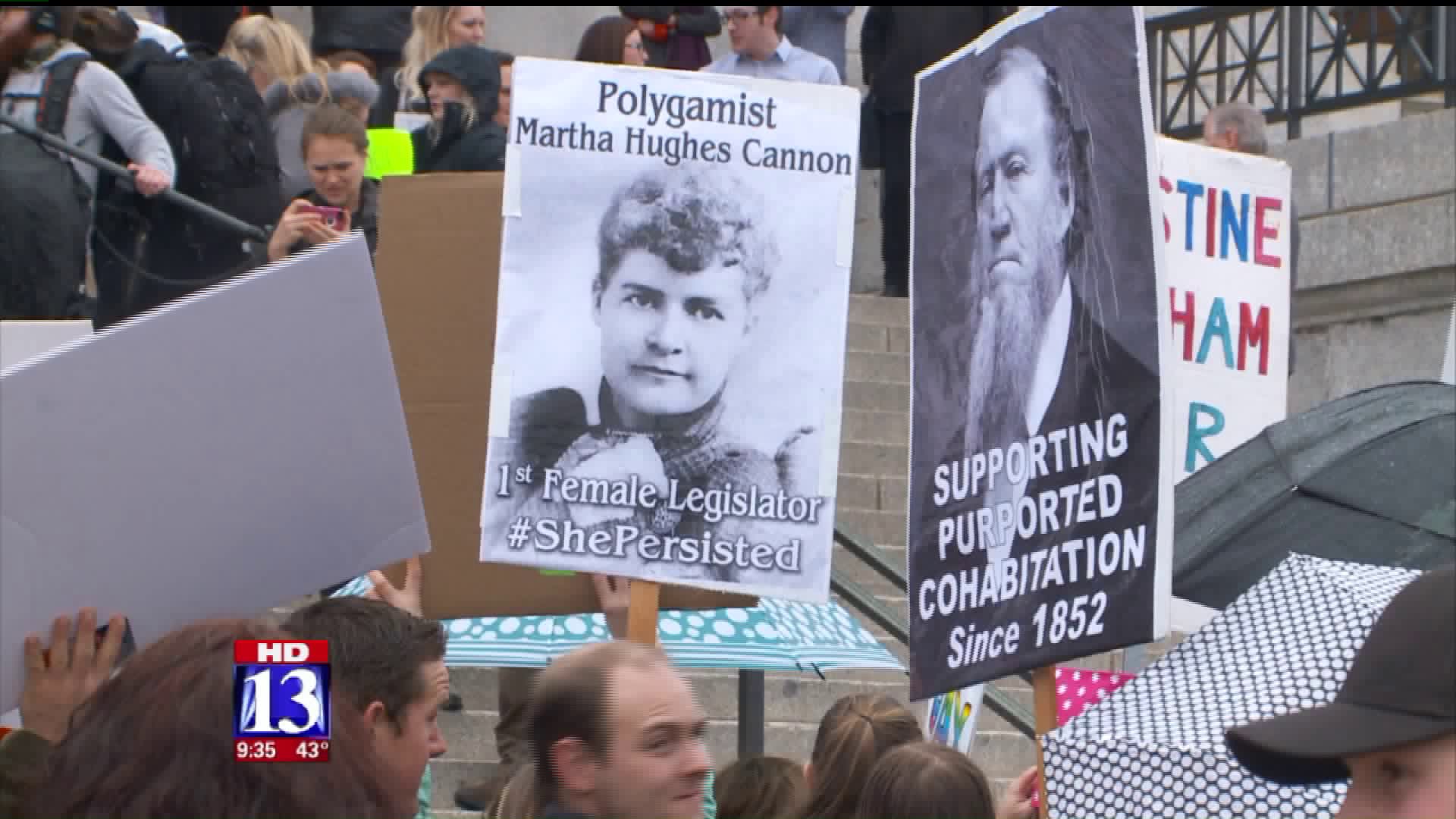 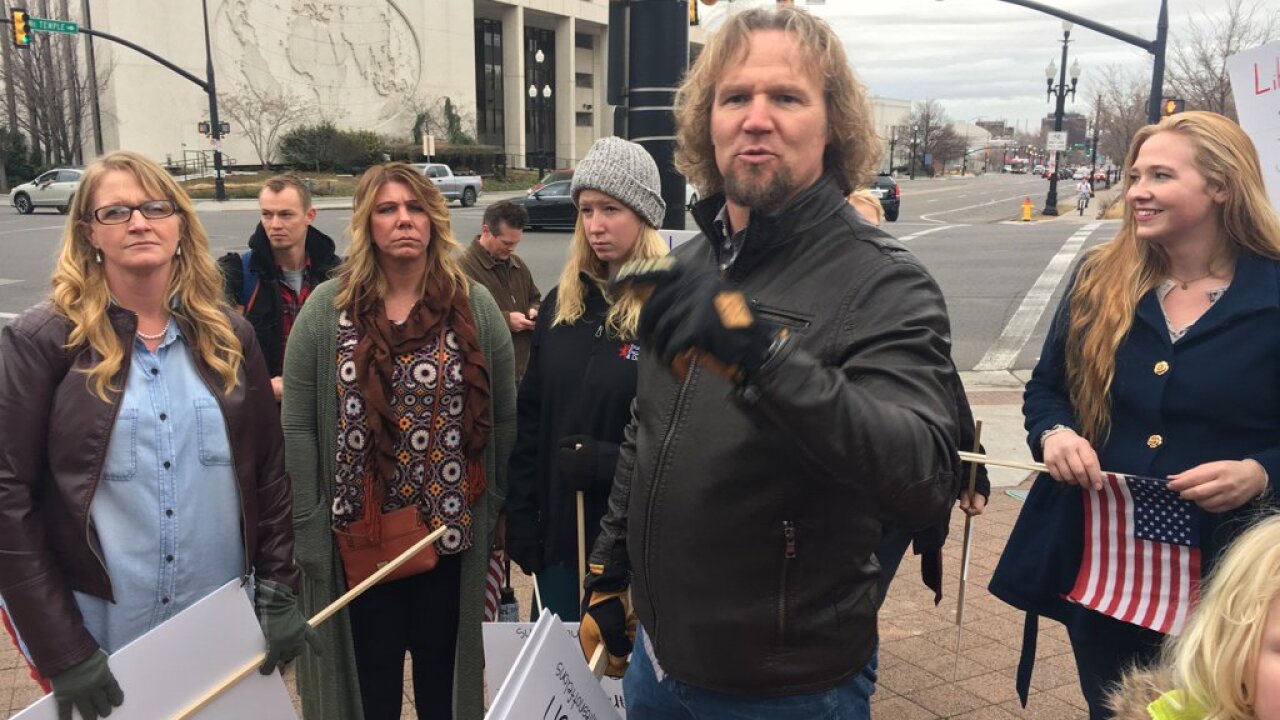 SALT LAKE CITY -- Hundreds of members of Utah's polygamous communities marched to the Utah State Capitol against a bill they said targets them for prosecution.

"Families, not felons!" they chanted in the rain on Friday afternoon, waving signs and demanding lawmakers vote against House Bill 99, which reaffirms that bigamy is a felony. Polygamists take issue with it primarily over a portion of the proposed law that makes it illegal to cohabitate with multiple people and "purport" to be married.

"We're not going to go away. We will still live as we believe and we're not abusing people," said Marlene Hammon, a plural wife whose grandfather went to prison for polygamy. "We're not hurting anyone."

Among those who marched to the Capitol was reality TV polygamist Kody Brown and some of his wives.

Kody Brown and two of his wives Christine (far left) and Meri, with some of their children, at a march to the Utah State Capitol against a polygamy bill on Friday, Feb. 10, 2017. (Photo by Ben Winslow, FOX 13 News)

Brown and his wives, Meri, Janelle, Christine and Robyn, sued Utah over its historic ban on polygamy, arguing it violated their religious freedom and privacy rights. The family came under investigation after they began appearing on their reality TV show, "Sister Wives."

"We're safe in Nevada. It's essentially a beautiful exile," Brown said. "We're coming here so the plural families in Utah can survive and thrive."

In 2012, a federal judge struck down a portion of the state's ban, making it no longer a crime to "purport" to be married and cohabitate. The 10th Circuit Court of Appeals overturned it, ruling the Browns did not really face a threat of prosecution, and the U.S. Supreme Court last month declined to hear the Brown family's petition.

HB99 sponsor Rep. Mike Noel, R-Kanab, said he is running the bill in part to avoid another legal challenge to the state's polygamy ban. At a news conference Friday, he was joined by women who said they had left abusive situations in polygamous homes.

Members of Utah's polygamous communities protest against a bill they said targets their community. (Photo by Ben Winslow, FOX 13 News)

"Most of the polygamists are not the innocent polygamists," said Jessica Christensen, an ex-member of the Kingston polygamous family. "We represent the true victims of polygamy."

They argued HB99 is necessary to help fight against abuse, fraud and child-bride marriages.

"There's too many proven harms of polygamy," said Kristyn Decker, the director of the Sound Choices Coalition.

As the opponents of HB99 marched to the Capitol steps, Rep. Noel and his supporters stood at the top of the steps watching. The bill passed out of a legislative committee last week after attempts to make bigamy a misdemeanor failed. It is expected to have a vote in the House next week.

At Friday's rally, polygamists who spoke decried the bill as "religious bigotry" targeting them. After rallying on the Capitol steps, they went inside to send notes to lawmakers and ask them to vote against HB99.

"Government loves power and so does religion," Brown told FOX 13.

A sign with a picture of early Mormon leader Brigham Young is held inside the Capitol by a pro-polygamy activist. (Photo by Ben Winslow, FOX 13 News)

When asked which religion he was referring to, he replied:  "Do I need to say it? I think polygamy is a blight on the face of the Mormon church."

Brown spoke out against abuses within polygamy and specifically denounced Fundamentalist LDS Church leader Warren Jeffs. Brown said he believed that if the state of Utah wanted to combat abuses, it should decriminalize plural marriage.

"We see and know there is abuse in the polygamous community, but there is abuse in all communities," he said. "What happens is when you criminalize, essentially, consenting adults, you create a dark place, a petri dish to grow abuse."

A protest sign at a march on the Utah State Capitol by members of Utah's polygamous communities. (Photo by Ben Winslow, FOX 13 News)