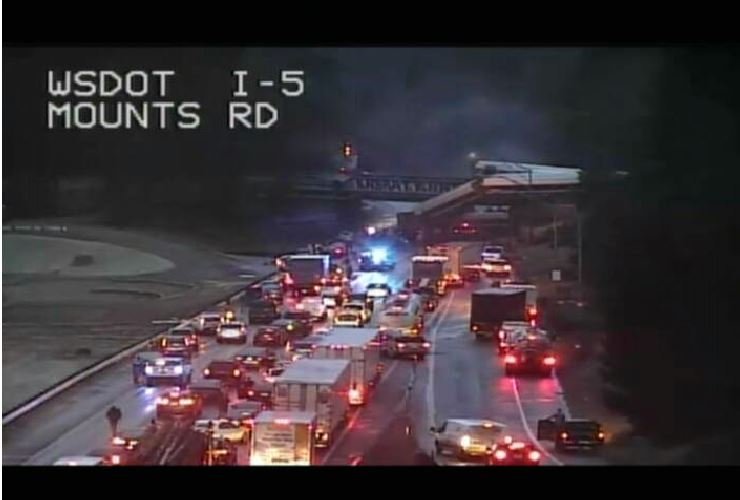 PIERCE COUNTY, Wash. — Careening around a curve at almost three times the speed limit, an Amtrak train derailed and hurled passenger cars off an overpass and onto rush hour traffic below — killing three people and injuring more than 100 others.

“We felt a little bit of a jolt, and then at a certain point we could hear crumpling of the train car, and we were catapulted into the seats in front of us,” passenger Chris Karnes said.

The Amtrak Cascades 501 train was carrying 86 people on its first journey on a new service route from Seattle to Portland when it derailed Monday.

It’s not clear why the train was traveling at 80 mph in a 30 mph zone, said National Transportation Safety Board member T. Bella Dinh-Zarr.

But this much we do know: The track had undergone millions of dollars of improvements and weeks of testing.

Yet Positive Train Control — technology that automatically slows down and stops a speeding train — wasn’t activated, much to the dismay of the NTSB official.

“We have recommended PTC for decades,” Dinh-Zarr told CNN on Tuesday. “Unfortunately the deadline was moved farther into the future, and every year that we wait to implement PTC to its fullest extent means that more people will be killed and injured.”

The questions investigators will be asking after Amtrak derailment

— Investigators were able to get the information about the speed from a data recorder retrieved from the rear locomotive. But the front locomotive “is more difficult to access,” Dinh-Zarr said.

— The train’s engineer has not yet been interviewed, but the NTSB hopes to have all interviews completed “within the next day or so,” Dinh-Zarr said.

— PTC was installed in the segment of tracks where the derailment happened, but wasn’t operational yet. The target date to have it working was spring quarter of 2018, said Geoff Patrick, the spokesman for Sound Transit — which owns tracks where the train derailed.

— All the deaths were contained to the train, said Ed Troyer, the Pierce County Sheriff’s Office spokesman.

The train departed Seattle at 6 a.m. Monday and had made two stops before it derailed at around 7:40 a.m. in DuPont, about 20 miles south of Tacoma, near the Billy Frank Jr. Nisqually National Wildlife Refuge.

The train apparently came out of a curve and ran off the track while crossing or approaching an open trestle over I-5. The following rail cars derailed in a jumble on both sides of the track, with some falling to the road below, landing on vehicles. One rail car dangled precariously over the highway.

Several motorists in vehicles that were struck by the fallen train cars suffered injuries, but no one on the road was killed, the sheriff’s office said. Five cars and two semi-trucks were involved in the crash, Washington State Patrol spokeswoman Brooke Bova said at a news conference.

How did this happen?

The NTSB and local authorities have not said what caused the crash. Investigators will likely look at several factors including the track, human performance, operations and mechanics of the train.

These are the questions investigators will be asking about the derailment

Most of the route was graded for a maximum speed of 79 mph; the speed limit on the curve where the crash occurred is 30 mph, said Rachelle Cunningham with Sound Transit.

Witnesses said they saw the train traveling at a fast speed.

Daniel Konzelman, who was driving on Interstate 5 at the time, said the train and his car were “kind of parallel” and “it was going faster than us.”

PTC, the technology that automatically slows down and stops a train if it senses that it’s going too fast or might get into an accident, had been installed on the track, but wasn’t operational yet, said Geoff Patrick, Sound Transit spokesman.

For PTC to be fully operational, it needs to be installed in trains, because a computer system links the train cars and tracks together, he said. The target date for having the PTC operational for that segment of the track had been the second quarter of 2018.

Amtrak has equipped 49% of its locomotives and 67% of its tracks with PTC, according to Federal Railroad Administration data from the second quarter of 2017.

The biggest obstacle to PTC: cost.

In response to a 2008 head-on collision that killed 25 people near Los Angeles, Congress passed a law ordering the nation’s railroads to adopt PTC by December 2015. But the railroad industry has opposed PTC because of its high cost and technological issues.

As 2015 came to a close, several railroad companies threatened to shut down services unless Congress gave them more time, maintaining the deadline wasn’t realistic given the complex technology.

So Congress extended the deadline, giving companies until December 31, 2018, with extensions up to 2020 if certain requirements are met.

The Association of American Railroads estimated that as of March 2017, freight railroads had spent $8 billion and passenger railroads $3.5 billion to meet the PTC mandate.

“The reason why they’ve been given so many extensions has been money,” said Mary Schiavo, a CNN analyst and a former Department of Transportation inspector general. “It is expensive to put it on tracks all over the country.”

According to an online schedule, the 501 train connects “18 cities along the I-5 corridor including Seattle, Portland, Vancouver, BC, and Eugene, Oregon.” The train service is jointly owned by the Washington and Oregon departments of transportation, although Amtrak contracts to operate the service.

The train was running on track previously used for occasional freight and military transport, the Washington Department of Transportation said. The track had undergone millions of dollars of federally funded improvements and weeks of inspection and testing, the agency said.

Previously, the tracks where the derailment occurred were owned by BNSF. The tracks are now owned by Sound Transit, which managed the track upgrade in preparation for commuter service, the state department of transportation said.