Five law enforcement officers were shot and one of them killed after a barricaded suspect opened fire at an apartment complex in a Denver suburb, the Douglas County Sheriff said Sunday.

Two civilians also were shot and the suspect was shot and killed later by police, Sheriff Tony Spurlock said.

“This is a tragic day that we will be feeling for a long time,” Spurlock said. “Zack was a good kid, smiley kid. He was eager to work, eager to serve.”

Spurlock said the suspect, who was not identified, had barricaded himself in a bedroom and had been talking with officers before he suddenly opened fire with a rifle, hitting four deputies in the apartment.

“There were well over 100 rounds fired … from the suspect,” Spurlock said.

The suspect’s roommate, who was home, was not wounded. The two injured citizens apparently were not in the apartment.

The wounded deputies crawled to safety as other law enforcement agencies responded to the shots fired call.

A Castle Rock police officer was also hit, but it wasn’t clear where he was when he was shot.

The deputies were wearing ballistic vests but were shot in areas the vest didn’t cover, Spurlock said.

Spurlock said the suspect has had previous contact with law enforcement “throughout the metro area,” but has no criminal history.

The incident began after 5 a.m. at the Copper Canyon Apartments in Highlands Ranch, about 20 miles south of Denver.

It was the second time deputies had gone to the apartment Sunday. There was a noise complaint call about 1:30 a.m., but when deputies arrived there was no noise, Spurlock said.

The second call came in as a domestic disturbance, and deputies entered the apartment. During discussions with the suspect and his male roommate about the noise, the shooter slipped into a bedroom.

At some point, the suspect fired a quick succession of shots. Parrish suffered mortal wounds, Spurlock said he was told by a doctor at the emergency room.

“They all went down within almost seconds of each other so it was more of an ambush type of attack on our officers,” Spurlock said.

The suspect was killed almost two hours later during a shootout with a tactical team, the sheriff said.

A motorcade accompanied the fallen officer from a hospital in nearby Littleton.

“Any citizens in the affected area are instructed to shelter in place, avoid windows and stay away from exterior walls,” the sheriff’s office tweeted. An emergency shelter was set up for those displaced by the massive police response.

Steven Silknitter, a resident of the Copper Canyon apartment complex, said he rushed home to check on his fiancee after hearing of the shooting and arrived to hear a “barrage of gunfire exchange.”

The area was blocked off, and Silknitter said he saw at least 20 police vehicles.

“It’s the last thing I would have thought of at my complex,” he said. “It’s like something out of a movie.”

President Trump tweeted his “deepest condolences to the victims of the terrible shooting in Douglas County … and their families.”

Pelle is the son of Boulder County Sheriff Joe Pelle.

Parrish is survived by his wife and two young children. He joined the sheriff’s department about seven months ago, after two years with the Castle Rock Police Department.

Correction: A previous version of this article gave the incorrect age for Officer Tom O’Donnell. He is 41. 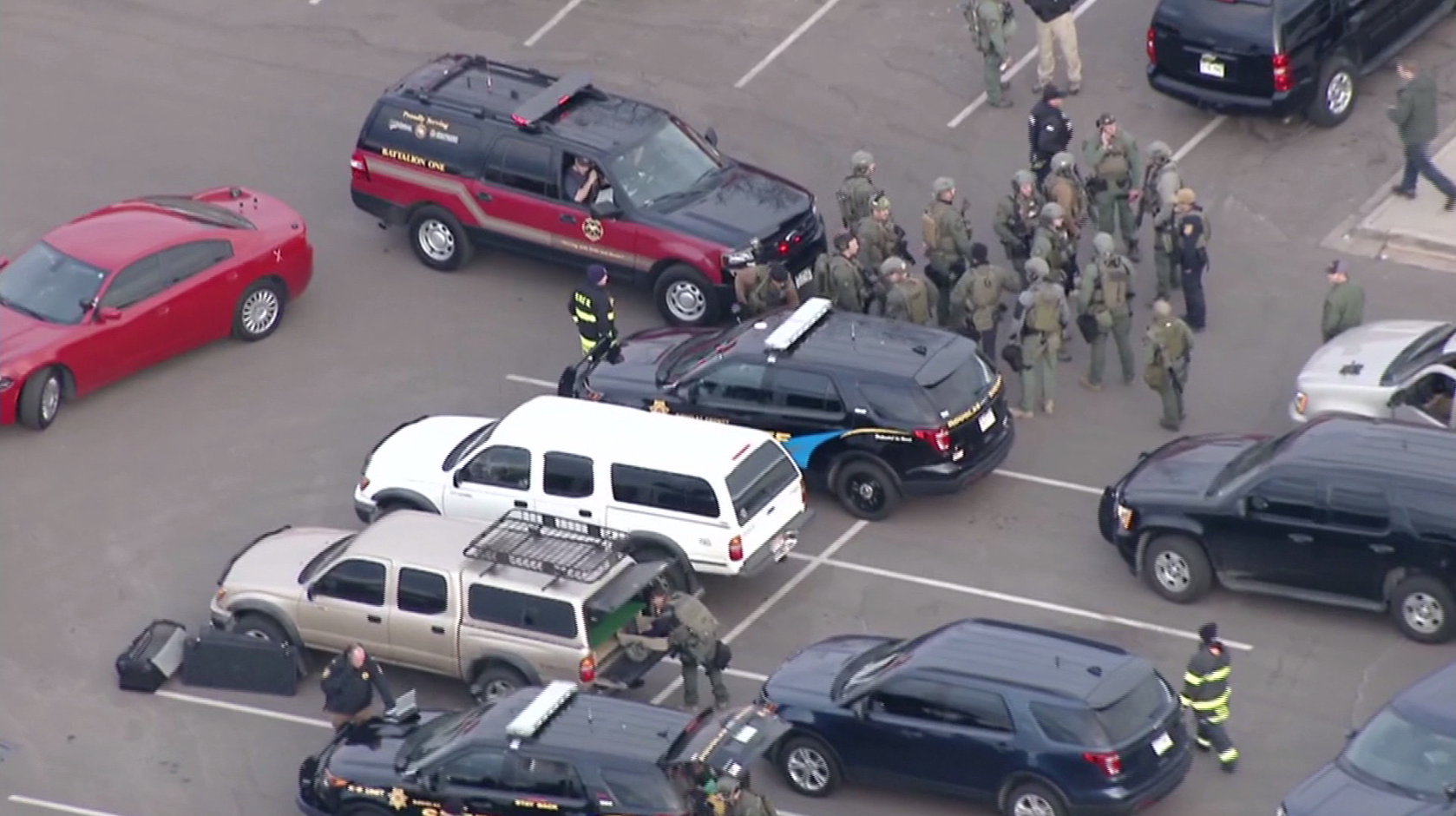