Six homes near the coastal community of Montecito were "wiped away from their foundations" by mudflow and debris, Santa Barbara County fire spokesman Mike Eliason said.

Heavy rain was falling in areas charred by recent wildfires, triggering warnings of flash flooding and mudslides because vegetation that otherwise would hold hills together and make the terrain flood-resistant has burned away.

• Eight storm-related deaths have been reported in Santa Barbara County, said Santa Barbara County spokesperson David Villalobos. The fatalities are believed to be centered in Montecito, where mudflows and floodwater have inundated areas downstream from the Thomas Fire burn area. Twenty-five injuries were confirmed.

• Fifty people have been rescued so far in Santa Barbara County, said county spokeswoman Valerie Kushnerov; efforts are concentrated in the Montecito area.

• The Los Angeles County Sheriff's Department lifted mandatory evacuation orders for hundreds of homes in Kagel Canyon, Lopez Canyon and Little Tujunga Canyon, areas impacted by the Fish and Creek fires. No major rain-related problems were detected in those areas, officials said. Mandatory evacuations were still in place in Burbank.

• Muddy, debris-filled floodwaters had widespread effect, with parts of the seaside US Route 101 closed in Ventura County, the sheriff's office there said. A stew of water, garbage and tree limbs flooded one part of US 101 between Montecito and Carpinteria, according to images from CNN affiliate KERO.

• By early Tuesday afternoon, more than 5.5 inches of rain had fallen in parts of Ventura County over two days, the National Weather Service said. In parts of Los Angeles County, more than 3 inches fell over that time and more than 4 inches in parts of Santa Barbara County.

• Rain was beginning to taper in the hardest hit areas of Santa Barbara, Ventura and Los Angeles counties by Tuesday afternoon, said CNN meteorologist Taylor Ward. The rainfall was expected to clear all of the Los Angeles area by late Tuesday, Ward said.

• Thousands of people were under evacuation orders because of flooding and mudslide fears ahead of the storm, including in Los Angeles, Santa Barbara and Ventura counties.

• The weather forced the closure of several theme parks, including Six Flags Magic Mountain in Valencia; Legoland California in Carlsbad, and SeaWorld in San Diego.

Teenager trapped for hours in Montecito

A 14-year-old girl, who had been trapped for hours in a collapsed Montecito home, was among those firefighters rescued, Eliason said.

The girl, coated head to foot in mud, was led by firefighters from the pile of wood and debris that was once a house, a photo from the county fire department shows.

In another part of Montecito, Eliason said he saw "utter devastation."

"There were three houses that were completely knocked off their foundations. Debris and wood everywhere, looking like matchsticks," he said.

Eliason recalled looking at the red band on a radar, indicating heavy rainfall.

"When that hit those hillsides, it just came rushing down," Eliason said. "Time and time again, I found myself waist deep in floodwater.

The mud and debris left roadways and neighborhoods in Montecito unrecognizable.

'Mud came in an instant, like a dam breaking'

Ben Hyatt said a river of mud had crashed through a neighbor's house in Montecito, a community of about 8,000 east of Santa Barbara,

"Apparently, one of their cars ended (up) in their backyard. We have neighbors at (the) top of the street that evacuated to their roof," Hyatt said.

Hyatt said his Montecito house was "surrounded by mud," and a washing machine had drifted into his front yard.

Hyatt said he was awake when power went out during heavy rain around 2:30 a.m. Eventually he heard a loud swish and banging on the exterior of his house.

"Seems calm now. We feel safe. But definitely stuck here for a bit."

There were several glimmers of hope through the destruction, such as rescue by the Ventura County Aviation Unit.

Also in Montecito, a ruptured gas line led to a fire that consumed a building, Eliason said.

Surveillance camera video appears to show an explosion connected to that fire, said Eric Trautwein, who posted the footage on Twitter.

Cars mired in the muck

Photos of vehicles stuck in mud in Los Angeles County and nearby areas dotted Twitter feeds. One post showed a California Department of Transportation crew trying to help a trapped motorist.

In another, a Los Angeles police squad car was mired in the muck. "Officers were responding to help with evacuations. Within seconds their vehicle was consumed by the mud," the post reads.

More than 1 inch of rain per hour

The rainfall rate of more than 1.5 inches per hour in parts of Southern California overwhelmed the landscape.

About a half-inch per hour is enough to start mudslides, said Robbie Monroe of the National Weather Service in Oxnard.

The downpour is overpowering a terrain especially vulnerable in the wake of recent fires. The Thomas Fire -- the largest wildfire in California's recorded history -- has burned more than 281,000 acres in Santa Barbara and Ventura counties since it began in early December. It was 92% contained, and officials don't expect full containment until later this month.

The cruel irony is that the region has suffered from years of drought, and officials say they need the rain to regrow plants and trees that help keep the hillsides together and flood-proof.

Mudslides are not uncommon to the area and can be deadly.

Thousands ordered or encouraged to evacuate

Knowing this week's rains likely were trouble, officials ordered evacuations for thousands of people ahead of time.

In Santa Barbara County, more than 6,000 people were under mandatory evacuation orders, including residents in parts of Carpinteria, Montecito and Goleta, located below areas scorched by the wildfires over the past year and a half, including the Thomas Fire, county spokeswoman Gina DePinto said.

Voluntary evacuation warnings were in effect for another 20,000 people, including others in those same communities, she said. 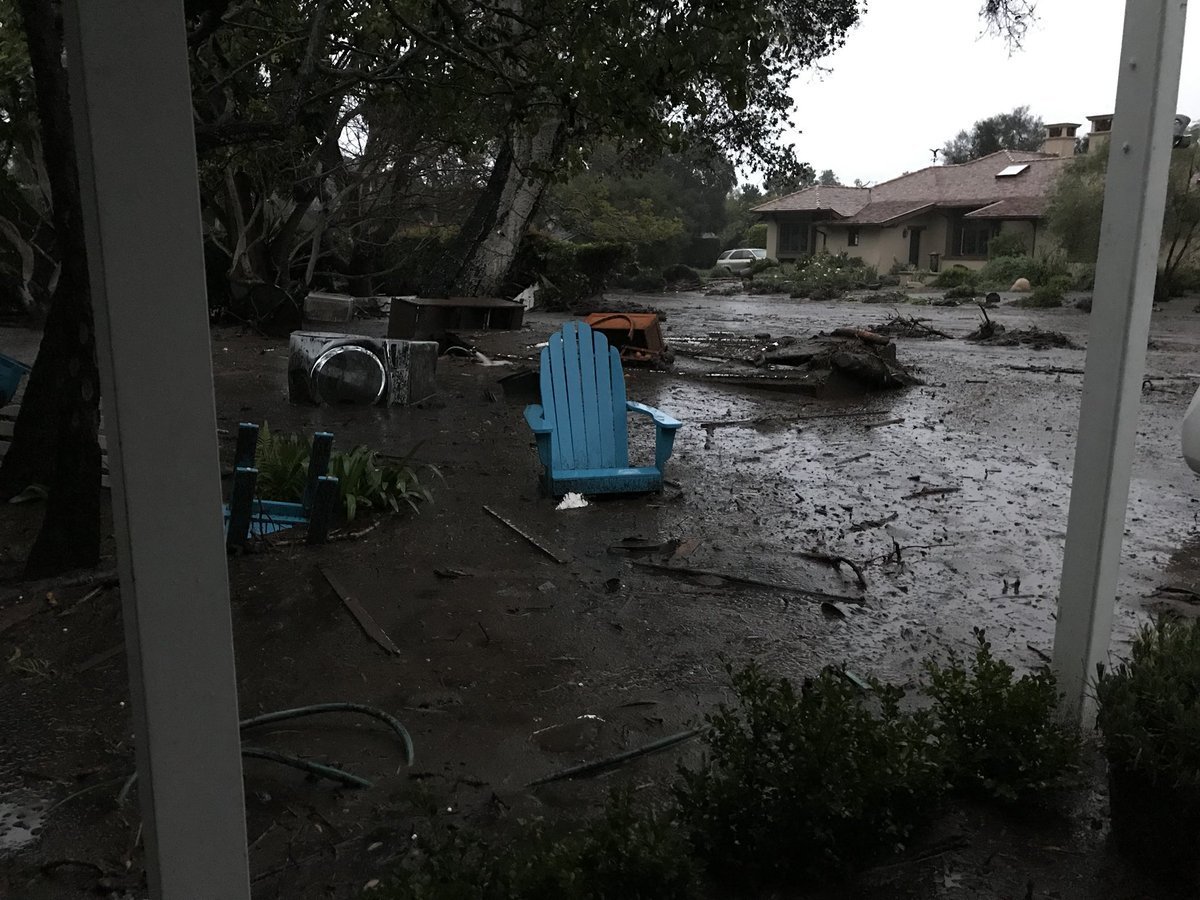