In a heated debate, the two candidates seeking the Republican nomination to be attorney general disagreed vehemently over criminal justice reform, campaign contributions and experience to lead the state's top law enforcement office. 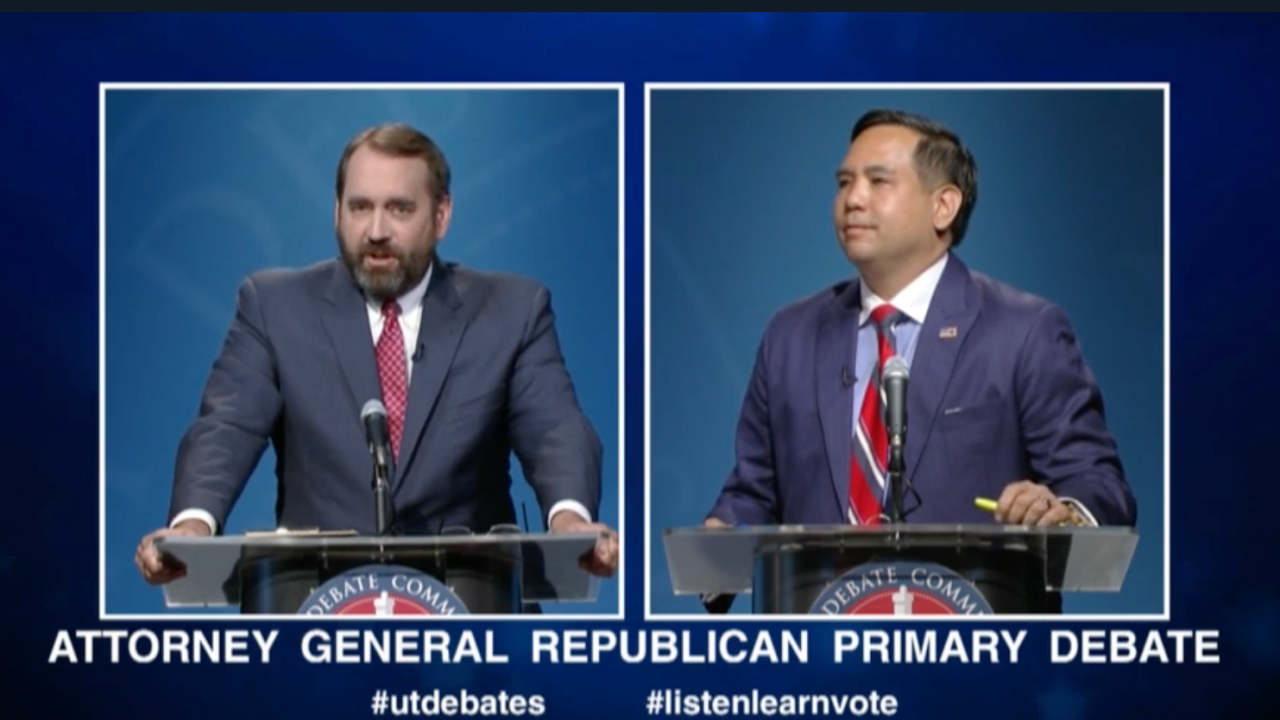 "I've got more to give," Utah Attorney General Sean Reyes said, asking voters to re-elect him for another term.

"Our very liberties are in jeopardy," said Utah County Attorney David Leavitt, who is challenging him.

Leavitt, who said he has served as both a prosecutor and defense attorney, said he wants to see criminal justice reform, criticizing Reyes as having a "lock 'em up" mentality. Reyes countered that Leavitt was inexperienced and his plans were too expensive. Reyes said criminal justice reform is an important issue, but not the only issue.

"I have been standing here, leading the state while my opponent has been in Ukraine," he said, referring to Leavitt's work for that country's government. Reyes defended his record on fraud, human trafficking and constitutional rights.

The most terse exchange came over campaign donations Reyes accepted from Washakie Renewable Energy CEO Jacob Kingston, who was convicted in a half-billion dollar fraud case. Leavitt criticized Reyes for taking the money while the feds were investigating the Kingston polygamous family.

"Why didn't the attorney general's office investigate the Kingston crime family during the same time period? Could it be, the fact they were giving money to every Utah politician have something to do with it?" Leavitt said. "I think it probably did."

Reyes told Leavitt to "fact check his stuff." He said they took the money when Washakie was "one of the darlings of Utah" advertising heavily everywhere in the state.

"No one suspected what we later found out was tax fraud," Reyes said. "Once we found out, that's when we said we'd like to segregate the money. You can see the credibility of my opponent, trying to say I knew they were a criminal syndicate while we were taking the money. We absolutely wouldn't have taken the money if that were the case. Innocent mistake."

(Reyes' campaign later admitted it spent the money instead of putting it in an escrow.)

The two also debated Banjo, a controversial artificial intelligence surveillance program the Utah Attorney General's Office has supported. Leavitt said it "violates so many of our civil rights." Reyes said Leavitt was misinformed about the state's agreements with Banjo, how it was paid for and insisted it did not utilize facial recognition.

"Technology can help us so long as we're not violating privacy," Reyes said.