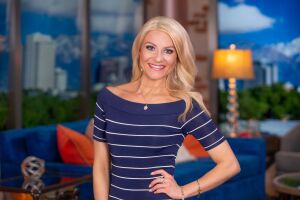 She’s chatty, inquisitive, and loves being in the limelight, so it was only natural Jenny Hardman found a career in television.

Jenny graduated from the University of Utah with a broadcast journalism degree. She also worked on her communication studies at Griffith University in Queensland, Australia, and studied history, language, and culinary arts at Dante Alighieri University in Siena, Italy.

From under the studio lights to the stage lights Jenny frequently emcees events. She grew up doing musical theatre and loves any chance she gets to be in front of a live audience. She is a spokesmodel, TV and radio media trainer, and social media manager. Jenny loves the adrenaline rush of it all and has her sights set high – her favorite quote has always been, “Shoot for the moon. Even if you miss you’ll land among the stars.”

She’s a pianist, fitness fanatic, food enthusiast, shopaholic, travel addict, and social butterfly! Jenny has traveled the world and spent time in Uganda, Africa, and Arequipa, Peru, working with orphan and at-risk kids. Through her travels she’s learned that everyone smiles in the same language.