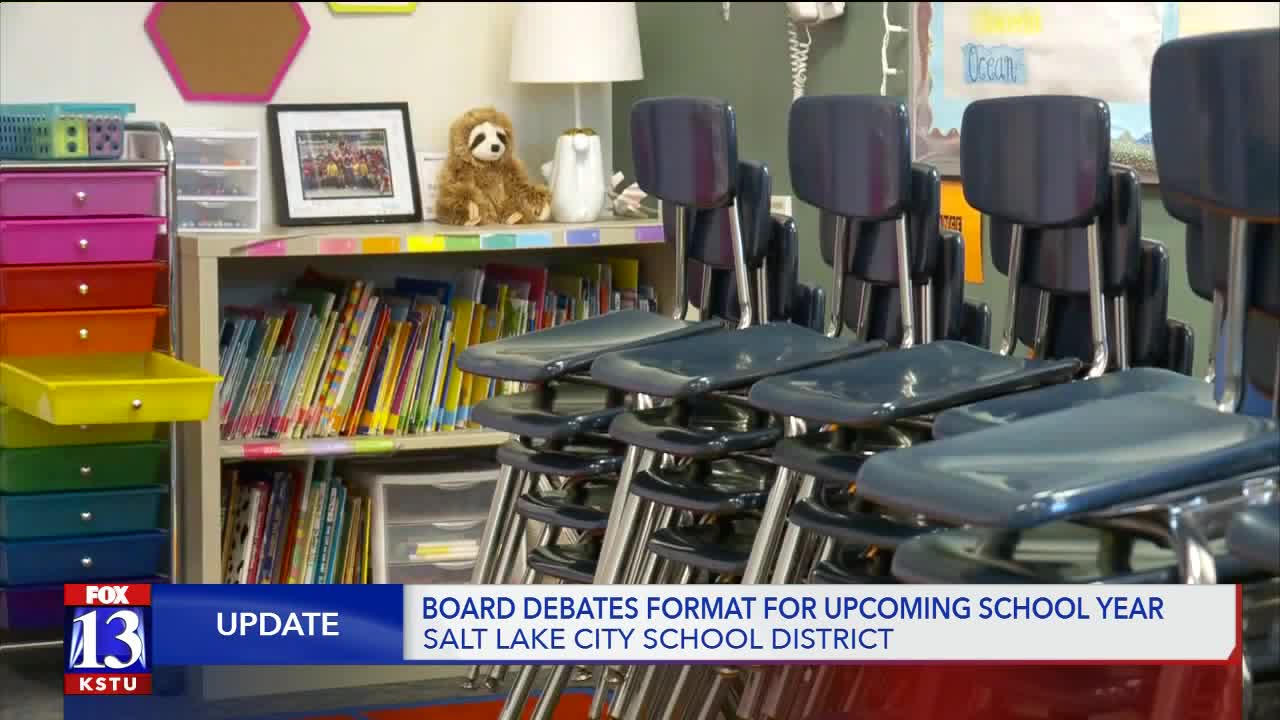 Salt Lake City School District parents still don't know what their child or children's class schedule(s) will look like this fall after the school board debated on how best to move forward with the school year.

SALT LAKE CITY — Salt Lake City School District parents still don't know what their child or children's class schedule(s) will look like this fall after the school board debated on how best to move forward with the school year.

During the board meeting Tuesday afternoon, Interim Superintendent Larry Madden proposed that students go strictly online for the first quarter, until October 30. He indicated that the district could then reassess where things were at with COVID-19 cases, and make a decision on whether to continue online, reopen school fully, or offer a hybrid curriculum of in person and online.

"We do worry about the physical and mental health of families, especially those that are most vulnerable," he said.

As part of his proposal, Madden also recommended pushing back the start date of school to September 8, the Tuesday after Labor Day. He explained that this extra time would be used for teachers to individually connect with their new students and to make sure that every student had the technology they needed to learn online.

This time could also be used for teachers to continue to get acquainted with remote learning through the Canvas platform.

Madden said that the district was bringing in 2,000 additional laptops, and they would make sure everyone had what they needed.

The Salt Lake City School Board of Education immediately dove into discussion.

Some board members expressed support of the proposal, saying it was the right step to take while Salt Lake City continues to stay in the "orange" level.

"Not only the right thing to do, but it's the safe thing to do to ensure the safety of our kids, their livelihoods," said board Vice President Nate Salazar.

Board member Samuel Hanson said October 30 is not that far away, and seemed to be a reasonable moment to reassess.

"I really don't agree with what they came up with," Michael Nemelka said. He questioned how parents would be able to work if they have to stay home with their students and wondered why they couldn't send students to school.

Other board members talked about wanting to offer parents and students a choice of online or in-person classes instead, as some other school districts are doing.

"My fear is that if not given a choice, that we will lose a lot of families to other districts," said Michelle Tuitupou.

Katherine Kennedy wondered if they should adopt plans that night or wait until August, to see if COVID-19 numbers improved in Salt Lake City.

Board President Melissa Ford said she would like to take time to see the plan fleshed out more, and that parents need to be able to have options.

When it came time to make a motion and vote, the discussion turned into a back-and-forth debate. At around 6 p.m., Kennedy talked about needing to be done with the meeting because of a prior commitment with her daughter.

She said they didn't understand this would be "contentious" when they discussed this meeting it at their meeting two weeks ago.

"You assured me that we would finish this meeting by 6 p.m.," Kennedy said.

"And I also have assured everyone else that we are going to make sure we're having a conversation, and we're listening and we're making careful and thoughtful decisions," Ford answered back.

Kennedy interrupted Ford. "I just called a question, so let's vote," she said.

At one point, Nemelka expressed confusion over what exactly was being decided.

"I'm sorry I don't even know what we are voting on!" he exclaimed. "You guys got me all confused. Remember, I'm old!"

"That's fair Mike," Ford replied. "Because this has kind of been convoluted, and I'm sorry about that."

"This has been a little bit of a flurry and unorganized, because we had a board member say we had a hard stop," Swett said at another point, eluding to Kennedy's need to end the meeting.

Ford answered: "And what I'm saying was, just making a motion that we create a space to continue conversation, and hear from your constituents and mine."

Kennedy began to talk over Ford.

In the end, the board voted to push back the start of school to September 8, and they also voted to approve the assurances plan to submit to the Utah State Board of Education.

Board members indicated that they want to hear feedback from stakeholders and parents before deciding on the fall school schedule.

The assurances plan lays out exactly how the Salt Lake City School District will handle safety and health regulations once students return to school.

The Salt Lake City School Board of Education next meets on August 4.