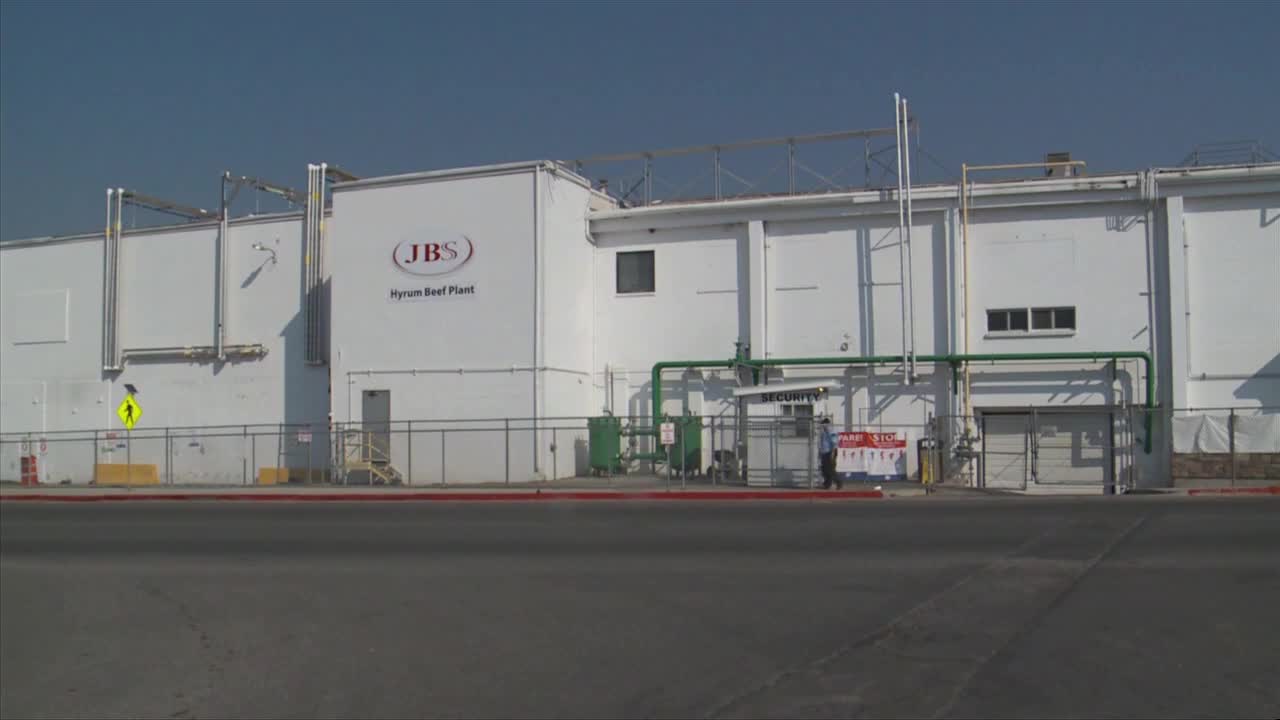 HYRUM, Utah — A new report shows the coronavirus outbreak at a meatpacking plant in northern Utah spread wider than the local health department has said.

Four hundred forty-one employees of the JBS Beef Plant in Hyrum tested positive for the virus as of June 16, according to an inspection report from the Utah Occupational Safety and Health Division (OHSA). The Bear River Health Department had told The Salt Lake Tribune it was 385 workers infected.

The health department also said no deaths were linked to the outbreak. Yet the report from OSHA says: “One employee has passed away because of COVID-19.”

The report did not name the worker. The plant had 1,495 workers at the time of the inspection.

“The team member who passed away was a faithful employee and friend who worked at our Hyrum beef facility. Our deepest sympathies go out to the family and to everyone who has been impacted by COVID-19. The company provided life insurance plus additional compensation to the family,” Nikki Richardson, JBS spokesperson, said.

The main discrepancy in numbers is because cases are investigated based on where someone lives, not where they work. Therefore, there were several health departments investigating the outbreak, Caleb Harrison, Epidemiologist Bear River Health Dept., said.

“I think that when it comes to reporting the numbers that having Weber-Morgan and there were a couple of other local health departments that investigated JBS associated cases, that there could’ve been a more coordinated response and having all of the JBS associated cases reported at the same time,” he said.

There could be more done to help unify how outbreaks are reported, Harrison said.

“I think that is important for individuals who work in that company and for individuals who live in the surrounding areas to know their risk for contracting the virus. So, to have transparency and understanding those numbers is important. So, to be able to communicate the actual numbers based off of the location, rather than just the residents of each area,” he said.

The JBS outbreak was one of the largest in Utah. Saint Thomas Aquinas Catholic Parish in Hyrum became a place people went for help during the trying time. The church handed out about 400 baskets of food and gave people tens of thousands of dollars’ worth of assistance.

“I first thought, how am I going to help all these people that are coming to us because we have no funds, but people have been so surprisingly generous,” Father Rogelio Felix said. People donated online from across the county and in-person to help those impacted by the Covid-19 outbreak.

“I was not afraid. I decided to start looking through the Facebook, the church website and the Facebook page and the response of the people was very good and quick,” Felix said.

The church is still finding ways to help even months after the initial outbreak.

“It’s not only the fact that they got sick with Covid, it’s everything that’s come after the fact with that,” Felix said.

Many people have gone back to work at JBS or in other jobs.

OSHA finalized its report sometime after July 23, according to dates in the document. The office released the report last week.

“We have done everything possible to both protect and support our team members during this challenging time. We have adopted hundreds of safety interventions, provided increased pay and rewarded team members with bonuses,” Richardson said.

No fines have been issued to JBS. The report is largely complimentary of the meatpacker.

The plant’s cleaning contractor was asked to “conduct additional and more thorough cleanings on the graveyard shift,” the report says. Later, transparent barriers were added between workstations.

That wasn’t enough to keep the virus out. The first two positive coronavirus tests at the plant were on May 4, the report says. A third person was tested that day and received positive results a few days later. All three lived together, the report says.

The positive tests kept accumulating. At first, JBS sent home both the positive workers and their “known associates,” the report says.

Then JBS only sent home the employees who tested positive. The inspector referred to the plant by its former name, “Swift.”

“Between May 10, 2020, and May 30, 2020,” the report said, “Swift Beef stopped sending all known associates of COVID-19 positive employee’s home fearing the inability to maintain operations.”

Between May 30 and June 2, the plant had all of its employees tested for the coronavirus. That helped abate the outbreak.

Inspectors learned one employee in early-to-mid May was kept at work while he had a fever of 100 degrees.

“This employee’s supervisor was aware of the situation,” the report says, “and asked the employee to go outside to see if his temperature would come back down, which it did and the employee finished his shift.

“The following day, this employee submitted to testing for COVID-19. A few days later the employee was informed that he was infected with COVID-19. This employee did not return to work after the night of this incident and was off for the next three weeks; however, out of the five persons on this employee’s team, four later tested positive for COVID-19.”

JBS “issued a verbal warning to the supervisor,” the report goes on to say.

“There is insufficient evidence that Swift Beef caused any employee to work after a positive diagnosis of COVID-19,” the report says in its conclusion.