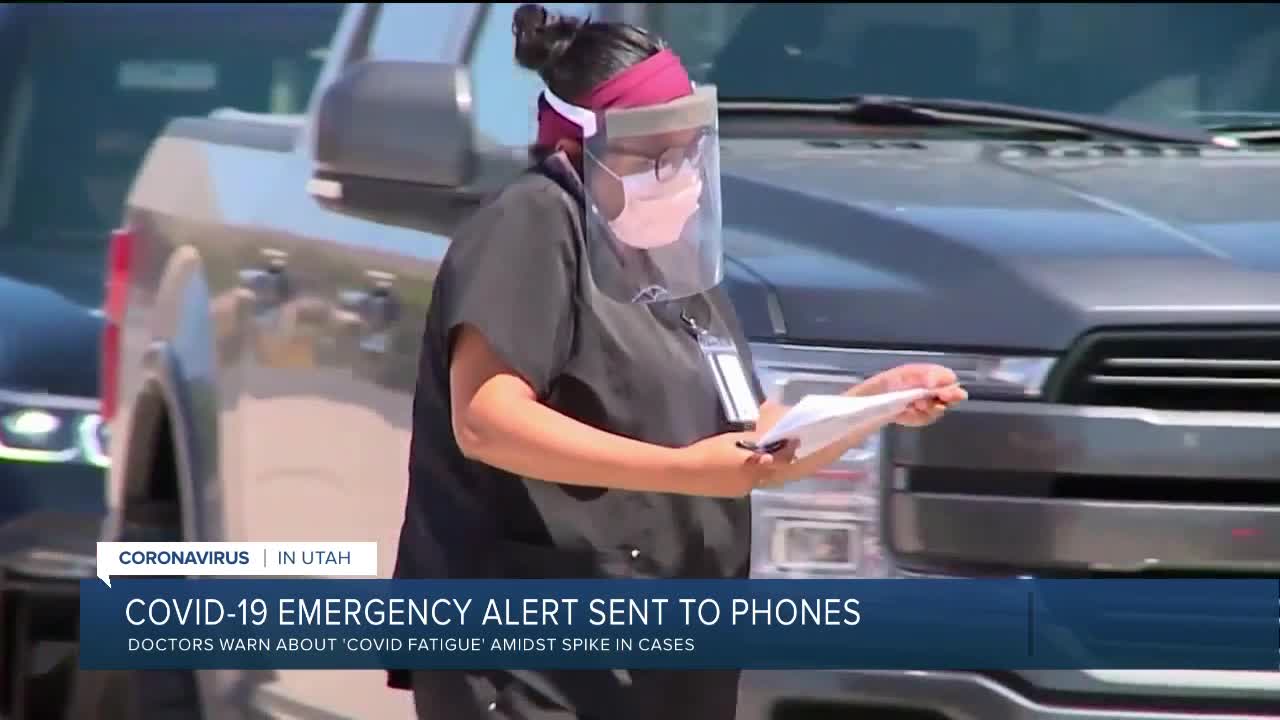 SALT LAKE CITY — On the cusp of Halloween weekend, just about every person in the State of Utah suddenly received an alarmingly loud alert on their cell phone around 2 p.m.

It warned of the increasingly serious situation with COVID-19 in the state. The Department of Public Safety indicated that anywhere from 1.5 million to potentially 3 million cell phones lit up with the message.

"When I saw it, it was kind of nice they're doing precautions all over the state, to give everybody a reminder," West Valley City resident Leveti Tukumoeatu said. "But, we all should know by now what we should do."

That's because the alert came on the heels of a week filled with similar, repeated messages from state leadership. Not to mention it's a message that has been echoed for several months.

Tukumoeatu talked about feeling COVID-19 fatigue as the pandemic drags on.

"It's way [more] overwhelming than it should be, the way I look at it" he said.

"Everyone's tired of it, everyone wants everything to return back to normal," she said of what others are feeling. "But this needs to be the new normal, unfortunately."

Hearing the same message time and time again-- for what seems like months on end-- can wear on the mind, indicated psychiatrist Dr. Travis Mickelson.

Dr. Mickelson, who is the Medical Director of Mental Health Integration at Intermountain Healthcare, explained that some of his clients have suffered mental and physical effects from the stress during the pandemic.

"When we're dealing with the same stressor day-in and day-out, many of us have these moments where we just feel this level of fatigue like we just can no longer manage or deal," he said.

One way to deal, could certainly be to tune out all the noise.

"Avoidance is a very common coping strategy that people have," he said.

But instead of swiping the emergency alert away and moving on, Dr. Mickelson made three suggestions on rejuvenating one's mental state during the heaviness of growing case rates and deaths, while still heeding the repeated messages and alerts.

First, he suggested finding a coping strategy and making sure you are utilizing it.

Dr. Mickelson mentioned how he's seen many success stories over the past several months, as individuals and families take on new activities. He said that has included music, art, more time outdoors, and limiting screen time.

Second: Stay positive. Dr. Mickelson suggests at the end of the day, identify at least three positive things that went well or made someone's life better.

He said that during times of stress, the human brain is wired to be more focused on negative, stressful things in the environment. He said people tend to forget what's going well, and they need to be proactive to remind themselves of the positive things.

"There's a lot of research that shows that those of us who focus on positive events, which create positive emotions, do end up being more resilient and better able to manage stress," he said.

And finally, Dr. Mickelson said to reach out for professional help if you need it.

He said if you or someone you know is exhibiting signs of not managing stress well and the signs and symptoms don't get better, it's time to reach out.

Dr. Mickelson mentioned that Intermountain Healthcare has their Emotional Health Relief Hotline, which runs seven days a week from 10 a.m. to 10 p.m. That number is 833-442-2211.

Tukumoeatu said he certainly didn't expect COVID-19 to last this long, and it's affecting everyone. He talked about how he's been feeling COVID-19 fatigue for months.

"It's got worse and worse, and it's causing all kinds of problems-- our health, everybody else around the area are getting mad over it and protesting, and causing problems everywhere" he said.

Wade said she never thought it would go downhill so fast.

They both talked about diligently following the mask mandates, and taking alerts like Friday's DPS message seriously.

"It sucks, but we got to do what we got to do until there is a vaccine and we can reduce the rate," Wade said, adding, "but, got to save people's lives."