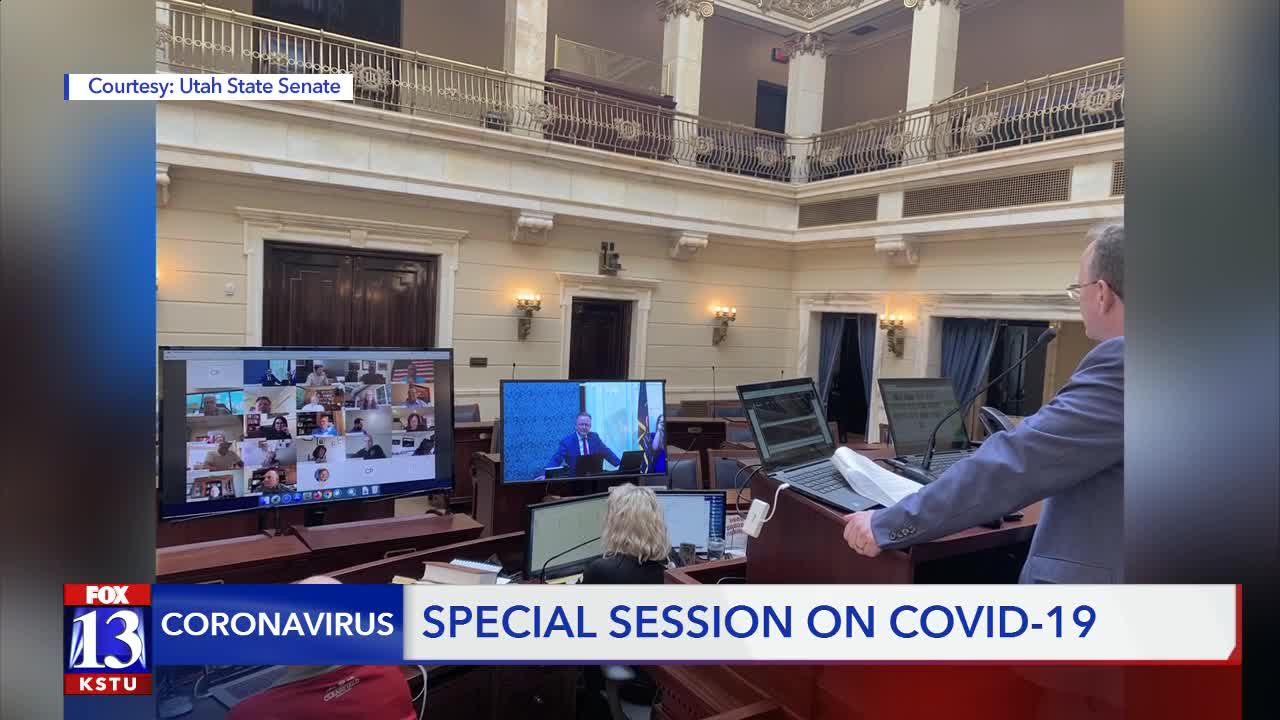 The Utah State Legislature's historic special session to deal with the COVID-19 pandemic will begin Thursday with no lawmaker being allowed in the Capitol.

SALT LAKE CITY — The Utah State Legislature's historic special session to deal with the COVID-19 pandemic will begin Thursday with no lawmaker being allowed in the Capitol.

Social distancing isn't possible in the House and Senate chambers. Instead, House Speaker Brad Wilson and Senate President J. Stuart Adams will be alone on the dais, presiding over empty rooms with dozens of lawmakers on a video conferencing app.

"This is a brave new world," Speaker Wilson, R-Kaysville, said in an interview with FOX 13.

Lawmakers practiced voting from their living rooms earlier this week. A bill passed in the final days of the 2020 legislative session (as the pandemic was ramping up) allowed for lawmakers to hold a session online in the event of an emergency.

"This is new for us," said Senate Minority Whip Luz Escamilla, D-Salt Lake City, who is still recovering from COVID-19 at her home.

"It may just bring some light to how real this is. How close it could happen to someone who’s a friend, a colleague or a family member," she added.

Lawmakers are taking up a number of critical issues in the special session. There are budget bills to accept federal money and shift resources around to ensure the state can properly respond to the health crisis and the economic crisis. Speaker Wilson said one bill would create a commission to look at the process to "re-open" the state once COVID-19 cases start declining.

"Here’s the process by which we’re going to evaluate the health condition of the state, but also the business conditions of the state, and try to slowly dial up the getting back to work effort in incremental steps," he said. "So we don’t slide backwards with the health measures, but we can get people back to work. Because we know they’ve got bills to pay, families to feed and they want to get out of the house."

On Wednesday night, Senate Bill 3004 was filed creating a commission including appointees by the governor, legislature and representatives from Utah's Department of Health and health care system representatives.

Sen. Escamilla said she is pushing for more equity in resources, especially with data showing that people of color in the state are being disproportionately affected by COVID-19. She is seeking a budget appropriation to shift some additional resources to those communities.

"It really is sometimes about your zip code and your income," she said. "So part of what we’re trying to do is be proactive."

Asked about the bill by FOX 13 on Wednesday, Governor Gary Herbert expressed some concerns, but said he had been speaking to legislative leaders about it.

"Sometimes issues come up fast and furious that we don’t have a chance to gather the legislature together and say 'Let’s talk about this and come up with a solution.' That’s why there’s emergency powers and executive orders that come from the governor’s office," Gov. Herbert said. "But that being said, we certainly want to make sure we’re working in concert. Particularly issues of this magnitude."

Speaker Wilson said they were not taking away the governor's authority, but seeking a more collaborative process.

"There’s a difference between an earthquake, and something that’s a one-time immediate event, and something like this that lasts for months," he said. "What we’re saying in this piece of legislation is that if something’s going to have a long trajectory and time frame, we’d like to have 48 hours notice."

Another bill that was introduced on Wednesday night seeks to place some more regulation on local health department orders. Speaker Wilson said there was some inconsistency in how local health orders are applied.

House Bill 3009, sponsored by Rep. Timothy Hawkes, R-Centerville, and Sen. Jake Anderegg, R-Lehi, has faced some pushback since the concept was first discussed earlier this month, with cities and counties concerned the legislature was going to override their authority to issue stay-at-home orders or other directives.

Cameron Diehl, the executive director of the Utah League of Cities and Towns, helped negotiate the bill and said they are satisfied with where they have landed.

"The local health department can issue a recommendation, but the ultimate decision maker whether or not to issue an order will be the mayor or the executive in the city or the county, subject to city or county approval after a period of time," Diehl told FOX 13. "There will also be some oversight with the governor’s office."

Other bills being considered for the special session related to COVID-19 include:

One resolution introduced by Rep. Melissa Ballard, R-North Salt Lake, would thank health care workers, state employees, IT workers, essential employees and others who have had to work in the face of the pandemic. Rep. Ballard's father, businessman and former House Speaker Bob Garff, died from COVID-19.

The special session will kick off at 9 a.m. Thursday with the House meeting first and then the Senate. Because of the technology and navigating dozens of lawmakers online, it is expected to last several days.

Because the Capitol building is closed, the public will not be allowed to be there in person. To comment on bills, people are being urged to email their elected lawmakers or comment using a form on the legislature's website. The special session is being streamed at le.utah.gov and broadcast on the Utah Education Network, a public television station. FOX 13 will also stream it online.

This will not likely be the last special session for the legislature, either. Speaker Wilson said it was likely they would need to meet in June to deal with other issues related to COVID-19.