Provo, Orem to move to orange on COVID-19 restriction scale 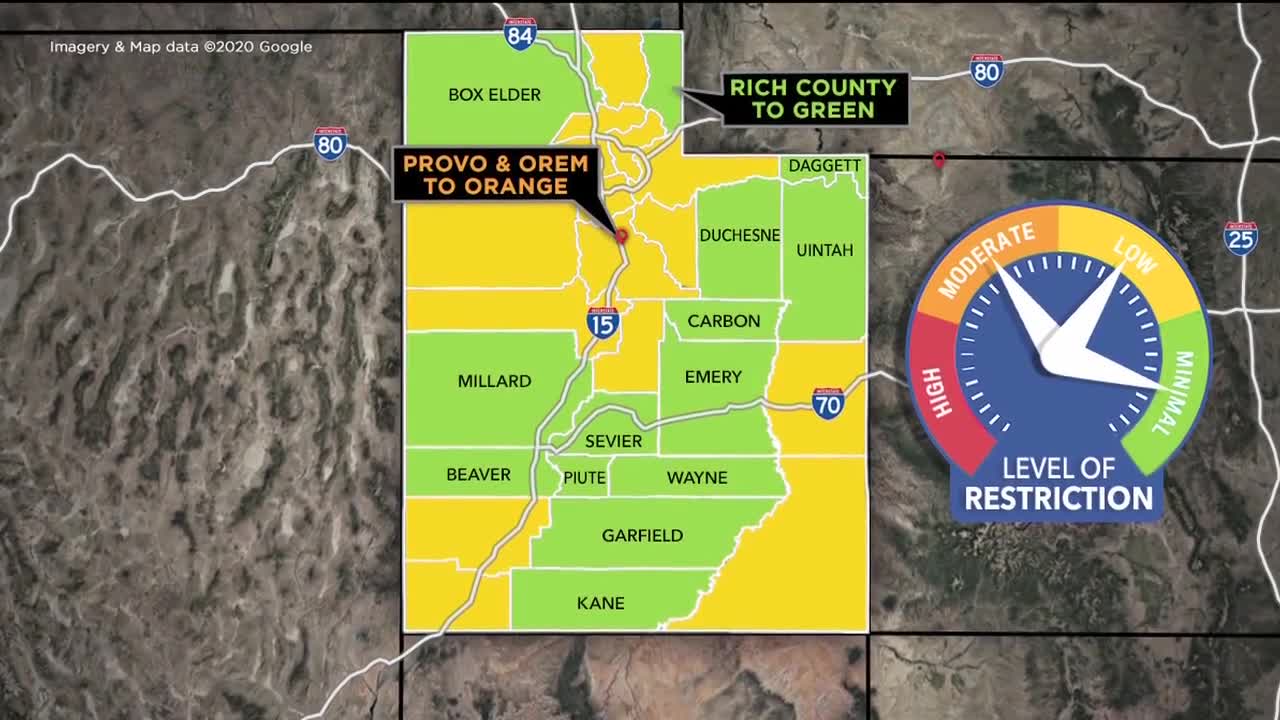 Governor Gary Herbert will move Provo and Orem to "orange" on the state's COVID-19 restrictions scale in response to a surge in cases. 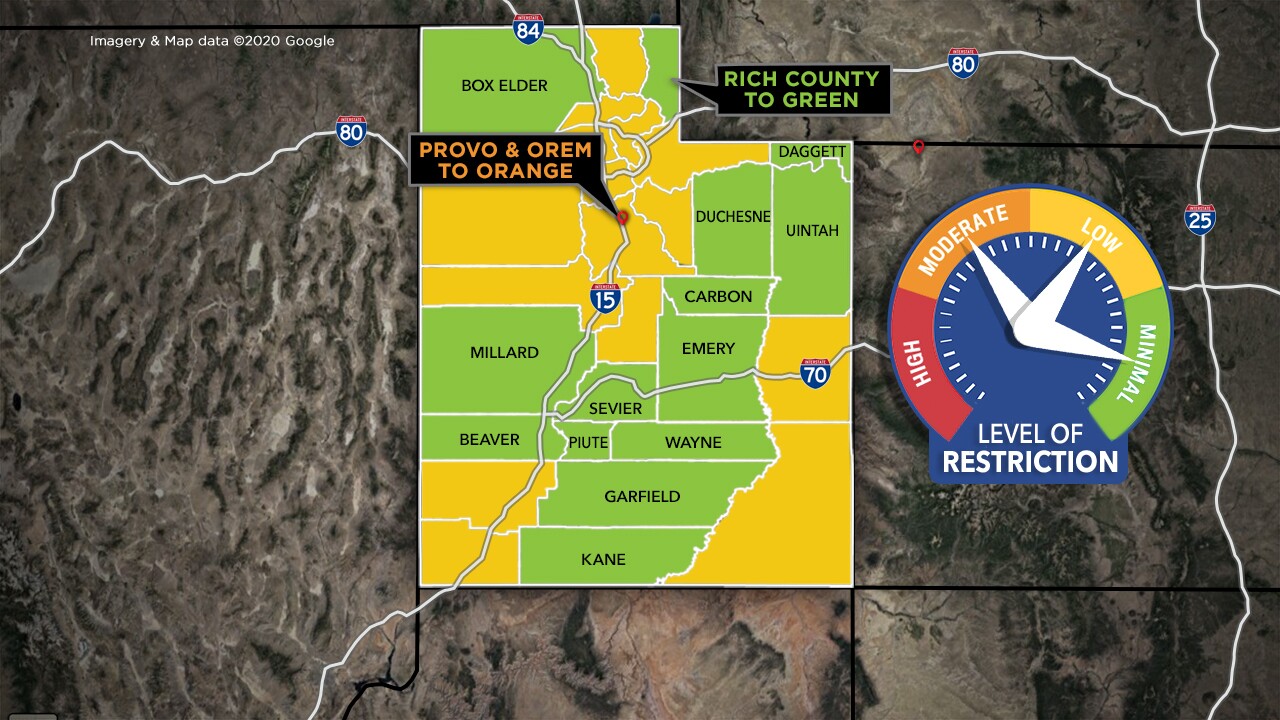 SALT LAKE CITY — Governor Gary Herbert will move Provo and Orem to "orange" on the state's COVID-19 restrictions scale in response to a surge in cases.

The move is the first time communities have moved backwards on economic restrictions since the pandemic began in March.

"Provo and Orem account for over 57% of Utah County’s cases last week and, in some areas, those two cities were between three and six times more likely to have COVID-19 than the rest of the state," said state epidemiologist Dr. Angela Dunn.

FOX 13 reported earlier Tuesday the governor was expected to restrict some cities. He declined, however, to move all of Utah County to "orange." Rich County, in northern Utah, was allowed to lower its restriction level to green -- the lowest level.

The move will mean large gatherings are prohibited and in-person dining will be limited (buffets are canceled, for example). Utah's Department of Health did grant an exception for sporting events.

"We will allow team sports to continue but with no spectators. The current guidelines of orange do not allow engagement of sports to occur," said Rich Saunders, the interim director of the state health department.

That means Brigham Young University's football team will be allowed to play Troy this weekend, but no one will be allowed inside LaVell Edwards Stadium in Provo to watch it.

Asked why he didn't move all of the county to orange, even though communities around Provo and Orem had similar elevated cases of COVID-19, Gov. Herbert said he was trying a "surgical" approach.

"We’re going to try this, doesn’t mean we can’t make an adjustment going forward if that isn’t successful. But I think there’s a willingness in Utah County to make sure this does in fact work," the governor said.

"This announcement can and should serve as a community rallying cry to more vigilantly follow health guidelines so we can quickly move back to yellow to protect our local economy from further damage," she said in a statement. "Provo City now begins the task of determining additional restrictions required by Governor Herbert’s directive and will be communicating these changes to our citizens."

Mayor Kaufusi recently vetoed a mask mandate, which was subsequently overriden by the Provo City Council. Salt Lake County Mayor Jenny Wilson sent the governor a letter pleading with him to issue a statewide mask mandate warning of negative impacts to Salt Lake City-area hospitals and the economy.

She has imposed one for all of Utah's most populous county.

"Today, I implore you to take it a step further and implement a statewide mask mandate. Not only does the health of Utah depend upon strong action, the future of our economy is at stake. The surge of cases in Utah has attracted national attention and it is not positive. The unchecked surge harms our reputation and fails to instill the consumer confidence we desperately need as we hope to salvage our tourism, ski, and convention industries in 2021 and beyond," Mayor Wilson wrote.

While he declined to issue a statewide mandate, Gov. Herbert has also been pressuring Utah County commissioners to impose one for the entire county. During a meeting last week, Commissioner Tanner Ainge signaled his support for a mask mandate. Commissioner Bill Lee told FOX 13 he would not support a mandate.

"We’re having a huge problem right now in the county and our behavior needs to improve. Part of that means wear a mask when appropriate," said Commissioner Nathan Ivie, who is now the "swing vote" on any mandate.

Commissioner Ivie told FOX 13 on Tuesday that negotiations were under way on verbiage of a mandate. He said he would not support criminal penalties for people who refuse to wear a face covering.

"Those are the factors we’re looking at, criminality and enforceability. When we get something that I feel doesn’t cross those thresholds? Heck ya, I’ll support it," he said.

The commissioner called on Utah County residents to voluntarily comply.