On the cusp of crisis: Will Utah enact state crisis protocols as COVID-19 cases surge? 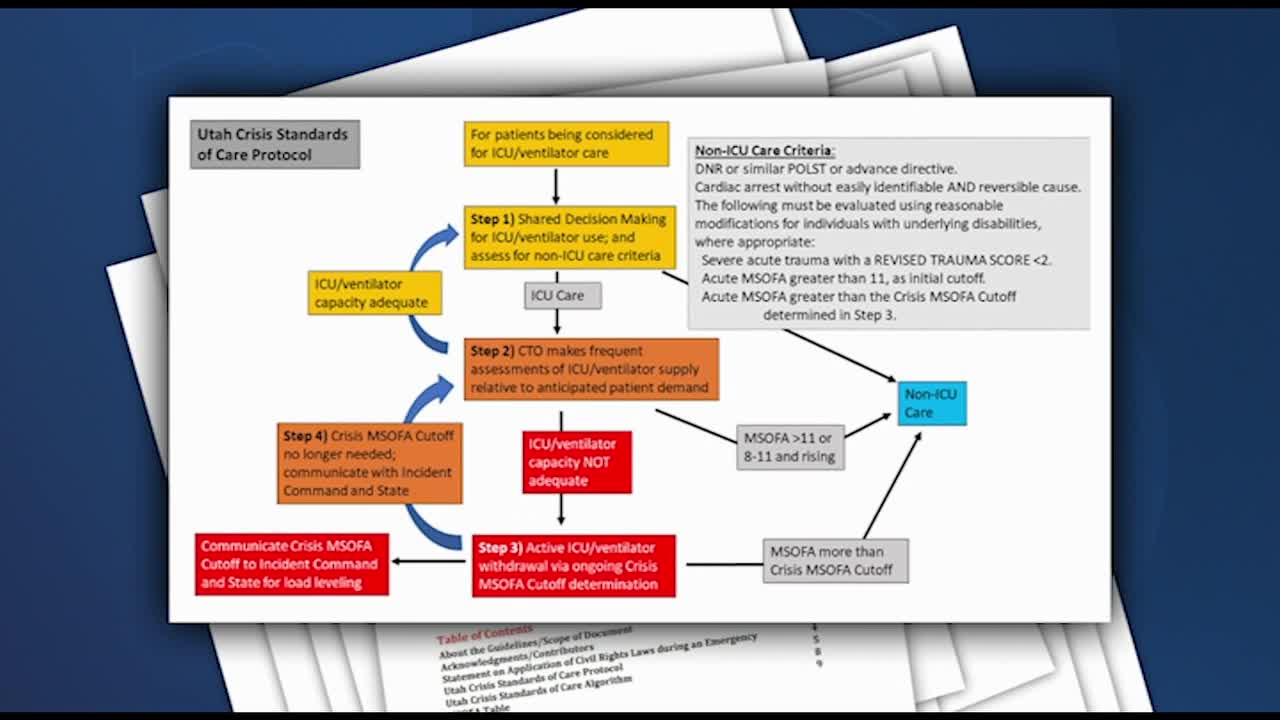 As the daily case count continues to rise across the country, hospital administrators say Utah's frontline medical workers are overworked and exhausted — both physically and emotionally.

SALT LAKE CITY — As the daily case count continues to rise across the country, hospital administrators say Utah's frontline medical workers are overworked and exhausted — both physically and emotionally.

How close is the State of Utah from rolling out its crisis protocols?

Dr. Russell Vinik, the chief medical operations officer at University of Utah Health, said if the trend continues, it could be sooner rather than later.

“What is hard to predict is how quickly we might get there,” Dr. Vinik said.

U of U Health has 111 regularly staffed intensive care unit beds.

On average, Dr. Vinik said about 20 of those beds are filled with COVID-19 patients — that’s about 15-20 percent of their patient care in the ICU dedicated to those with the virus.

The daily average of COVID-19 patients hospitalized outside of the ICU is 30.

“We just don’t have enough people to care for onslaughts of patients,” Dr. Vinik said.

Typically, he says they run two teams in the ICU, but there are currently three teams. By Tuesday, he says there could be a fourth team.

In comparison to last October, Dr. Vinik said they are averaging 30 to 40 more patients per day and they have yet to see their first flu case come in.

Nurses are both physically and emotionally exhausted, he said.

While the burden is taking its toll on health care providers, Dr. Vinik said they are at what’s considered “crisis level” in the state.

“That’s when everything is maxed out and you cannot deliver any more care to any more patients,” he said.

In August, the State updated its “crisis standards of care guidelines” outlining the civil rights allowed to patients and the decision-making process for health care providers when choosing who gets an ICU bed.

The decision would come down to who receives the resources based who is most likely to survive.

The current spike in case numbers won’t be felt inside the hospital for about two to four weeks.

Though cases are surging, it would take every hospital in Utah to be at the maximum capacity before using the State’s crisis protocol.

What makes the situation ever more intense, Dr. Vinik said, is not being able to reach out to other states for help.

“You can’t train a doctor or a nurse in a few months, and there’s a shortage nationally,” he said.

Dr. Vinik said it's something that will cause a lot of heartache if the public doesn’t adhere to the protections set out by the state — wearing a mask, social distancing and other guidelines.

“It’s going to be a trying several weeks, several months,” he said.