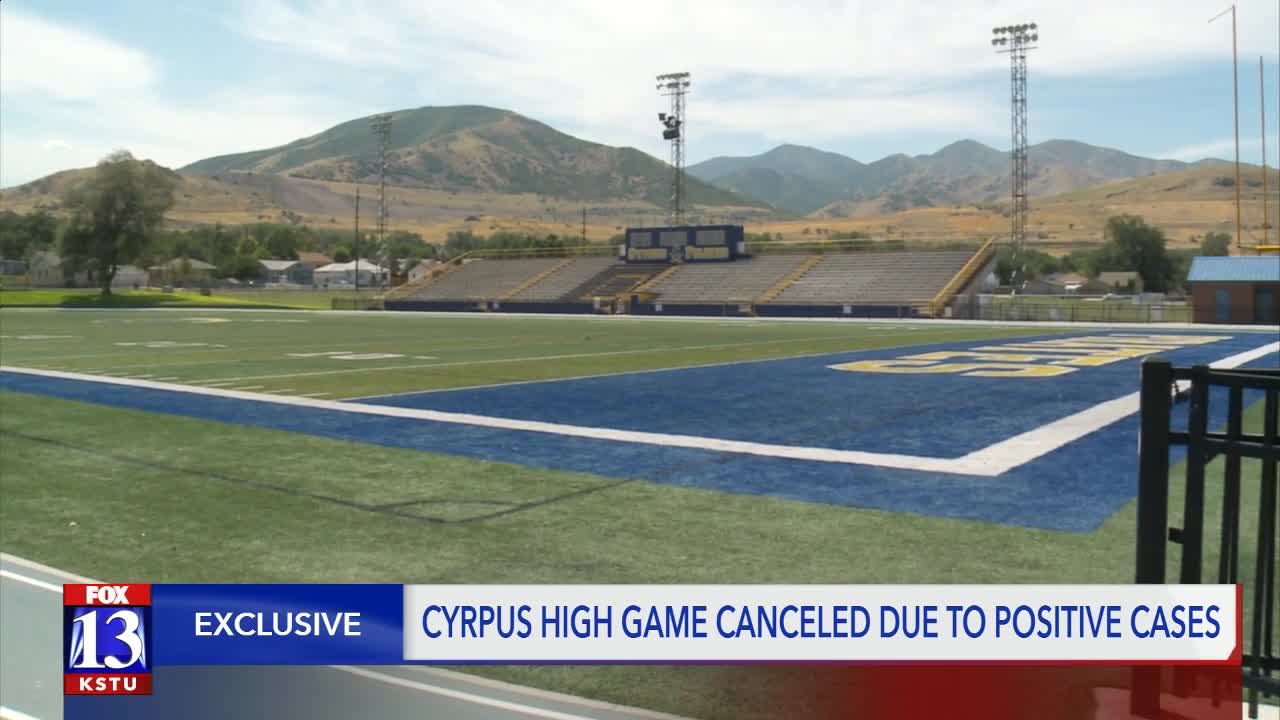 "Out of abundance of caution, we have decided that we will NOT be holding practices or games this week and will reevaluate the health of our team next weekend,” said Cyprus High School Principal Robert McDaniel in a letter to parents over the weekend.

“This principal and his coach really want to let the community know they are taking this very serious,” said Granite School District spokesperson Ben Horsley. “When we see cases pop up which invariably they will those cases are not impacting the entire sports team, so in this particular case we’re grateful the coaches were following the guidance to the tee, taking temperatures, wearing masks when appropriate and following the other guidance to the best of their ability.”

After playing Friday night, Granite School District says two players started experiencing symptoms on Saturday. According to Horsley, the two players showed up on Friday, had their temperature taken and did not show any symptoms. Cyprus was scheduled to play against Ridgeline High School in Millville on Friday night, however that game has been cancelled.

“Based on an investigation and contact tracing we have found that there were not exposures that require quarantine,” said Dr. Dagmar Vitek, Medical Officer at the Salt Lake County Health Department. “It is still safe to continue coming to football.”

A letter from the Salt Lake County Health Department was also sent out to parents by Cyprus High School’s football staff which included health recommendations for those that might be experiencing symptoms of COVID-19.

Click here to read the letter sent to parents.

“We are very appreciative and applaud the efforts of our Coaches for adhering to Health Department guidance and protocols that have helped to prevent the spread of disease,” said McDaniel.

Ridgeline High School plans to try and find an opponent for this upcoming Friday night. They were originally the ‘home’ team for Friday night but told Fox13 they’re willing to travel if need be and are looking at options that even include heading to Idaho as a potential location to play football this week.

"The UHSAA is encouraged by the actions of players, coaches, administrators, and fans as we adjust to the realities of participating in education-based activities during the COVID-19 era,” said UHSAA Assistant Director Jon Oglesby. “While we are encouraged by the steps taken by these groups, we continue to encourage UHSAA membership to actively participate in risk mitigation behaviors and to #MaskUpUtah."

Horsley wants to remind student-athletes that it’s not just about taking precautions while on campus. In this case, it appears the virus was contracted elsewhere.

“It’s not just socially distancing while on campus, it’s not just following protocols while you’re on campus it’s about not going out and handing out with a large group of students at night and not following the guidance there,” said Horsley. “At the end of the day our public and our students’ health is what matters the most, the athletic competitions are great, they’re enjoyable, they’re fun, they not as important as our overall students health.”