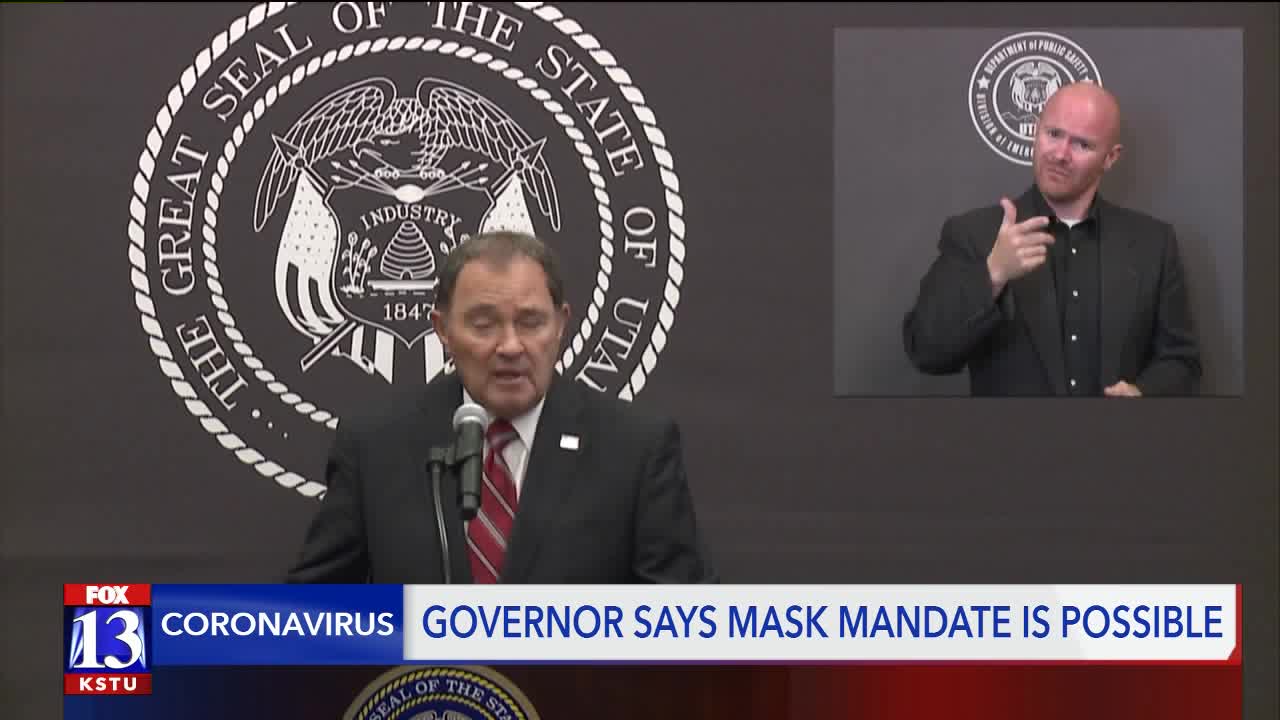 SALT LAKE CITY — Governor Gary Herbert said schools will re-open next month, and also would not rule out a possible statewide mandate for face coverings.

Speaking at a news conference to update Utah's COVID-19 response, the governor said it was necessary for schools to re-open. He also said he would modify the state's color-coded health guidelines to allow for Salt Lake City schools to resume. Because the city is in "orange" risk level, the governor said they could not be at the same level as other schools in the state.

"It is imperative, I think, that we open our schools. We cannot afford to have schools closed," Gov. Herbert said.

All of Utah's 41 school districts are to have plans to the state on how they will safely re-open by August 1. Dr. Lexi Cunningham of the Utah State Schools Superintendents Association said they were taking feedback from the public, teachers and students on how to do it.

"Every plan is different as is every district," she told reporters.

In a statement to FOX 13, Salt Lake City Mayor Erin Mendenhall said she agreed that schools ought to re-open -- but called on the governor to issue a statewide mandate for face coverings.

"It is important for the sake of our students - especially those who don’t have reliable access to internet, a computer, or a safe place to be during the day - that there be some in person form of school this year. But as with everything this virus has shown us, we have to have strict guidelines in place to protect our children and our teachers," Mayor Mendenhall said. "We are just over a month from school starting and we need to make a sizable impact on our case numbers between now and then. Rules matter to people. The governor’s orders matter to people. My hope is that he takes the step to make masks mandatory statewide."

The governor has mandated face coverings in all K-12 schools and at all state-run facilities. But he has stopped short of implementing a statewide mandate, expressing his desire that Utahns wear them voluntarily.

On Wednesday, dozens packed a Utah County commission meeting, disregarding health directives to physically distance and wear face coverings, to demand that the governor allow the county to opt-out of his mandate. Commissioners disbanded the meeting without considering the request because of the lack of health guidelines.

The governor told reporters on Thursday the protesters' move was a "foolish action."

"I would hope people would show regard for those experts in the field of medicine and science, which are telling us this is what will help us to control the virus," he said. "I hope we can do it and comply because it's the right thing to do. Show respect for our fellow man and neighbors."

Gov. Herbert said he hoped people would wear face coverings in public voluntarily and said the state had a goal to get COVID-19 cases to an average of 500 by Aug. 1. The governor said there was encouraging signs that counties that implemented face mask mandates have seen some declines in cases.

But asked by FOX 13 if that justified a statewide mandate, the governor said he still preferred a voluntary approach.

"I think there’s a better way to do it and that’s voluntarily, we’re leaving some local control, but that is the sledgehammer we have still out there if we can’t do any other way," he replied.

"Our hospitals are near capacity. We want to be able to take care of all of the patients that need our care without overrunning our beds, and our nurses, and our physicians," he said.

On Thursday, Utah's Department of Health changed how it reports some COVID-19 data. The state is utilizing antigen tests and including them in case counts. Of the 954 new cases reported on Thursday, 251 were the result of antigen tests dating back to June.

Like the traditional COVID-19 test, an antigen test can tell someone if they have an infection. A traditional PCR test identifies an infection by detecting viral RNA, an antigen test identifies infection by detecting a protein that is part of the COVID-19 virus. Both tests are conducted using a nasal swab. Antigen tests are able to return results faster than PCR tests, state health officials said.

The state also reported one additional death, for a total of 254 since the beginning of the pandemic.