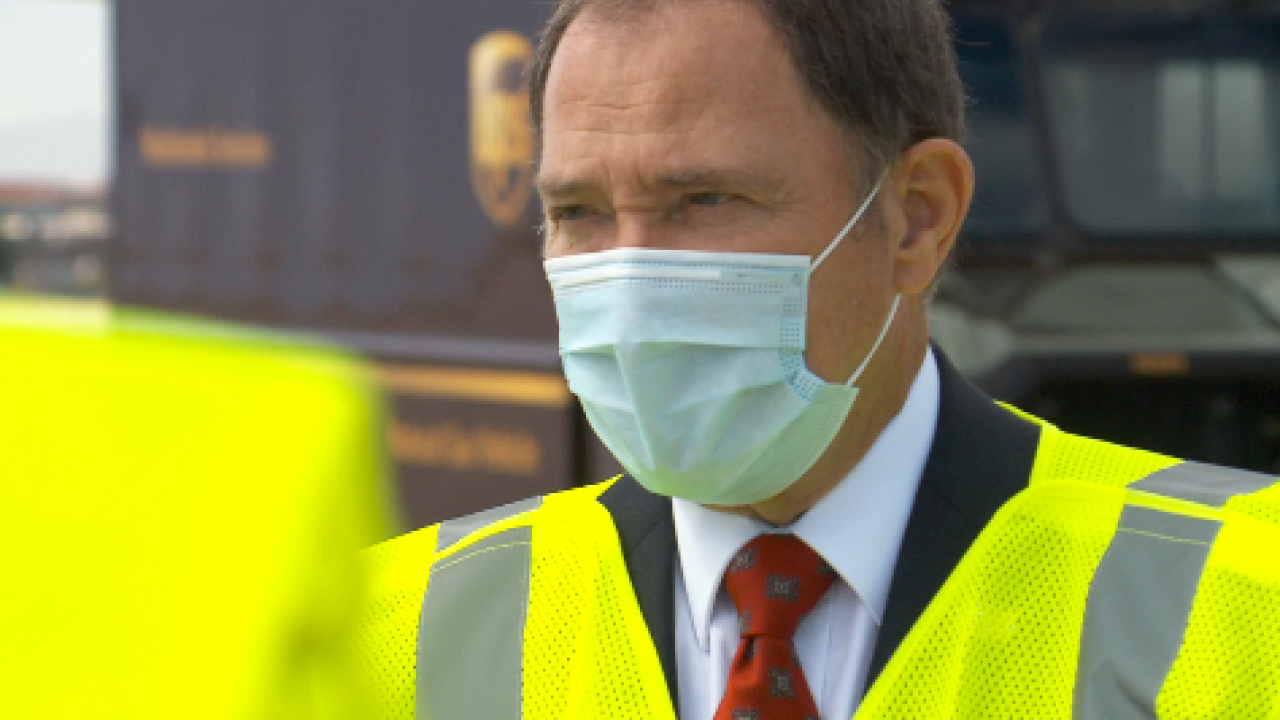 SALT LAKE CITY — Governor Gary Herbert said he intends to meet with members of the Utah State Legislature next week about whether or not to seek a statewide mandate for face coverings in public.

The governor disclosed the planned meeting in response to a question from FOX 13 during an event where 500,000 face masks were donated for children across the state to use when schools re-open in the fall as the COVID-19 pandemic continues on. The child-size face coverings were flown in on a Boeing Dreamlifter to Salt Lake City International Airport.

"I’m going to be meeting with our legislators next week to talk about where we’re at and review the data," Gov. Herbert said when asked about the potential for a statewide mandate of face coverings. "We have some red flags and we’ll be meeting next week to see if we need to take any other actions."

One state lawmaker at Wednesday's event said he appreciated the governor was reaching out to the Utah State Legislature.

"I very much appreciate that he’s not trying to issue just a mandate on his own. That would not go over well with myself or my colleagues in the legislature," said Rep. Adam Robertson, R-Provo.

Rep. Robertson said it was his preference that Utahns voluntarily adopt the wearing of face coverings.

"When we get a government mandate, we have something that’s edging dangerously towards a police state. We do not want to have a police state where under the penalty law that you have to wear a mask," he told FOX 13 during an interview where he wore a face covering. "I think people can be respectful in wearing masks. You’re wearing one, I’m wearing one. I do it out of respect for people. I think that’s the right way to go."

Salt Lake and Summit counties have issued mandates, with permission of the governor. The orders require people to wear face coverings over their mouth and nose in businesses, churches and other gatherings, as well as outdoors when social distancing -- staying at least 6-feet from others -- is not possible.

On Tuesday, the Grand County Council voted 5-2 to request permission to issue its own mask mandate for the Moab area. Asked if he would grant Grand County's request, Gov. Herbert said he would review it.

"It’s a legitimate question. Should government use its heavy hand and influence or should we use the more carrot and stick approach? I would prefer people wear the mask and practice social distancing and appropriate protocols on sanitation. Not because government makes them do it, they do it because they love their neighbor," he said.

Salt Lake County's face mask order expires on Friday, but Mayor Wilson said it will be renewed. She told FOX 13 the original order could not last longer than the governor's COVID-19 executive orders. As those are expected to be renewed, so will her mandate.

"We're going to have to learn to live with this," she said. "We can continue to go to our offices, go out to the store, engage, go outdoors, enjoy the summer. But the mask is what we're going to need to continue to engage."