What Utah classrooms could look like this fall, as CDC recommends masks and social distancing 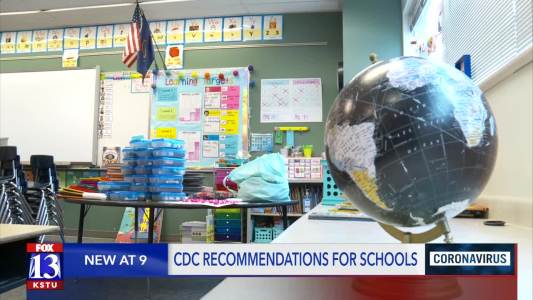 The CDC has released guidelines on what precautions schools should take upon reopening, and Utah school districts say classrooms could look at lot different this upcoming fall when kids return.

The CDC has released guidelines on what precautions schools should take upon reopening, and Utah school districts say classrooms could look at lot different this upcoming fall when kids return.

Families were thrown for a loop when schools across the state shut down this spring, over concerns of the spread of COVID-19. Much of the focus turned toward this year's seniors, who faced the challenge of graduating during a time when no one is allowed to gather in large groups.

At Olympus High Thursday, seniors in caps and gowns showed up to the auditorium with their families.

Individual groups waited outside and in the lobby, separated and several feet apart.

One-by-one, seniors and their families walked into the empty auditorium. Each student approached the podium, their name announced over the speakers. Families cheered as their graduates walked across the stage, took their diploma from the gloved and masked high school principal, and marched over to a balloon arch to stand alone for photos.

But even as the school year winds down, the way they implemented social distancing, may not just be a Class of 2020 thing.

"The 'new normal' is the term that you're going to be hearing a lot of," Horsley said.

The CDC put out guidelines for what it thinks is best for when classrooms finally reopen.

On the list? Everyone over the age of 2 wearing masks, spacing desks six feet apart, closing communal spaces like cafeterias and playgrounds, serving plated lunches, installing sneeze guards in some areas like front desks and between bathroom sinks, and creating space on buses by requiring one child per row, every other row.

"We can't meet that threshold. It's just not possible," Horsley said, specifically in regards to the social distancing on buses and in classrooms.

He pointed out that they'd need more buses, drivers, classrooms and teachers to make that all work.

Instead, he indicated that they'll implement what they can.

"That's some of the guidance we're getting from the state, is do your best with respect to social distancing," he said, of what they've been directed to do so far.

What will a classroom in Utah look like next year? According to Horsley, it could include keeping desks away from each other and avoiding grouping them together, hand sanitizer and cleaning wipes placed around the classroom, asking students to wash their hands frequently. He said it remains to be seen if students and teachers will have to wear masks.

"You could see, based on certain aspects of this, staggered start times and schedules," he explained, of school and class schedules. He also said students with compromised immune systems might still need to stay home.

The Granite School District will base their classroom expectations in the fall on recommendations from the Salt Lake County Health Department as well as Utah State Board of Education.

The USBE discussed the CDC guidelines during their budget meeting Thursday.

"While we are looking at the CDC guidance, we are relying on our local people for what that's going to look like," said USBE public information officer Mark Peterson.

They'll work with state and local health departments, as well as the Utah Coronavirus Task Force. He indicated that they hope to have a draft of guidelines for the board to look over at their meeting on June 4.

Both he and Horsely indicated that specific guidelines will also depend on if the State of Utah is still in the "yellow" phase, or has moved to "green."

While a lot is up in the air, both indicated that school will almost certainly be in session this fall-- but with "new normal" practices post COVID-19, that Peterson called the "now normal."