‘We would have never stepped foot back on the ship,’ Utah couple quarantined on cruise liner near Canary Islands 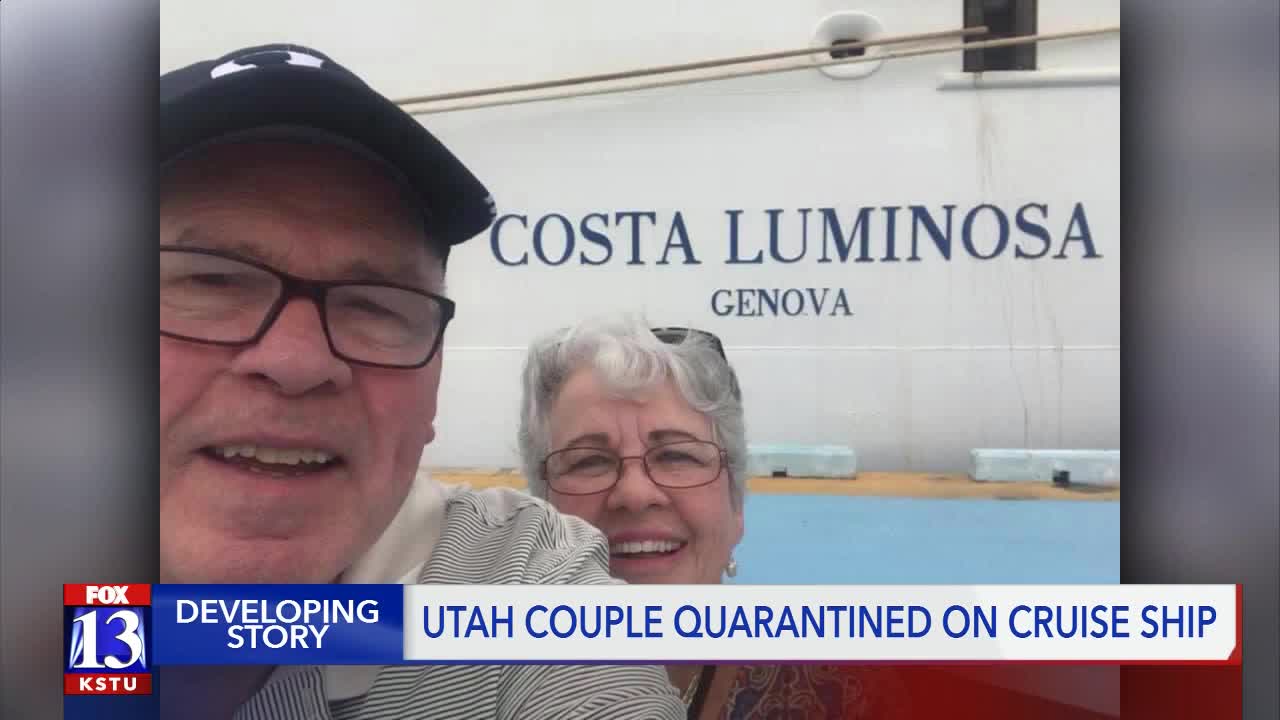 Yet another Utah couple has been quarantined on a cruise ship over concerns of coronavirus after a couple that was removed from the ship tested positive for COVID-19.

CANARY ISLANDS – Yet another Utah couple has been quarantined on a cruise ship over concerns of coronavirus after a couple that was removed from the ship tested positive for COVID-19.

When Susan and Robert Anderson embarked on the Costa Luminosa cruise liner on March 5, it was supposed to mark the start of weeks of relaxation. Now, the Cedar Hills, Utah residents have found themselves stuck inside their room with fears of coronavirus growing and no answers.

“So they put us on quarantine yesterday in the Canary Islands, so we’re stuck in our rooms,” Robert Anderson said in a video chat as he sat next to his wife.

Their run-in with COVID-19 related issues started on March 12 when the couple received their first letter from the cruise liner letting them know one of the passengers had been admitted to a Puerto Rican hospital and was being tested for the virus.

Three days and a few ports later on March 15, they received a second letter notifying them that two more passengers had been removed from the boat.

“We wish to inform you that we had been just informed that the guest who was disembarked on March 8 in Puerto Rico for medical reasons, and her husband… have been found positive to the COVID-19 virus and are both hospitalized.”

The Andersons said the notice was sent out only after the ship was back at sea.

On March 15, they were put into quarantine.

“When they started the quarantine, they started putting on the masks, started handing us things with tongs -- but [they] never did [that] until they put us in quarantine despite the fact they knew there had been the virus on the ship,” Robert said.

The couple then started to receive, ‘daily mandatory temperature checks’ on March 16, the same day they received their most recent letter.

“Costa Luminosa is currently sailing towards Marseille, after being denied disembarkation in Spain due to the decision of the Spanish authorities to close al ports as a measure to contain the spread of the virus,” the letter stated.

“Once in Marseille, where Costa Luminosa is set to arrive on March 19, all our non-Italian guests will be allowed to disembark the ship,” it continues.

However, despite the news of the quarantine-ending disembarkation in just a few days’ time, the Anderson’s don’t believe it will actually happen.

“Very doubtful. We’ve only been on quarantine for two days,” they said. “We have no idea how we’re going to get home, where we’re going exactly and we’re just in a state of limbo.”

Susan and Robert, who are both in their mid-to-late seventies, say so far, they do not have any symptoms.

“This is, for us, just another adventure,” Robert said.

“Maybe for him, but I don’t know if it is for me,” Susan laughed.