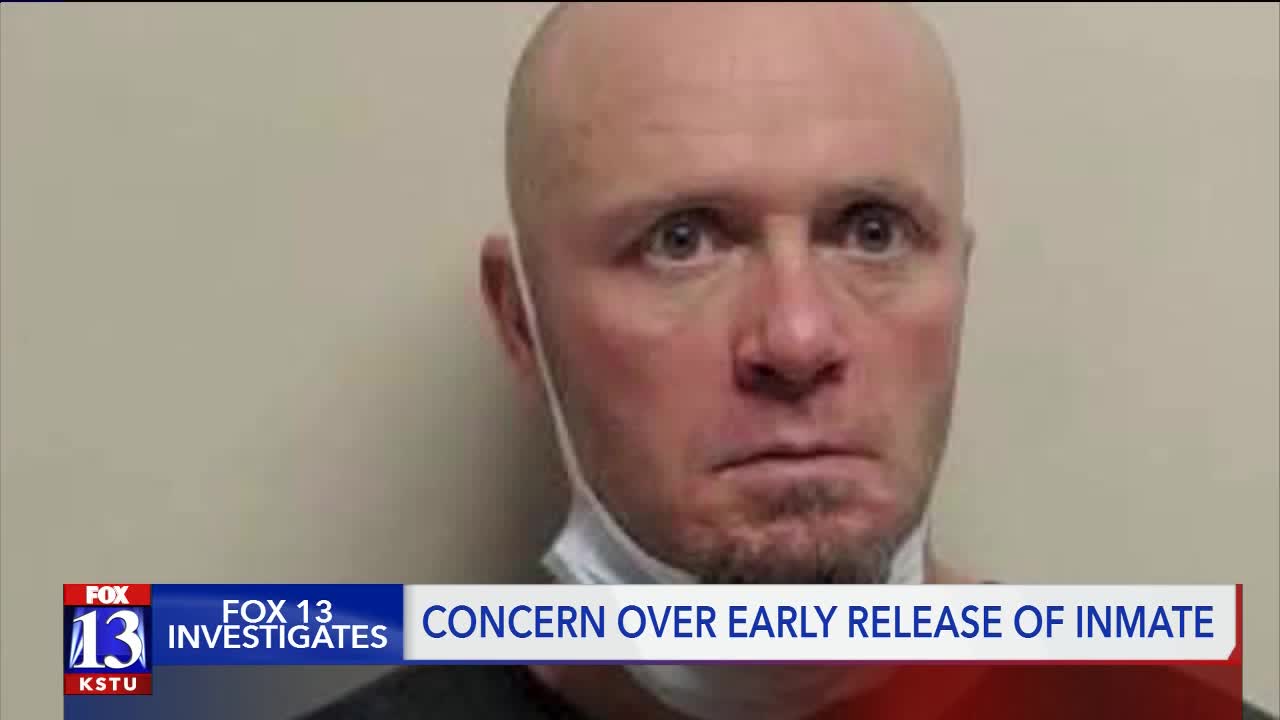 FOX 13 is investigating why a convicted felon was chosen to be released early last week from the Utah Department of Corrections despite his lengthy criminal history and an outstanding warrant for his arrest.

Joshua Haskell, 42, was transferred from the Utah State Prison to the Fortitude Treatment Center in Salt Lake City prior to his early release. He was quickly arrested on suspicion of a violent crime in American Fork after his release from the halfway house.

Officers with the American Fork Police Department confirmed Haskell was "suddenly released" on March 17 due to the current COVID-19 pandemic.

Police said Haskell broke into a random victim's house on March 19 near 200 N and 500 E, a few blocks from where he was supposed to be living.

According to arrest reports, Haskell tied up the female victim with shoelaces and held a serrated knife up to her throat.

"The male also demanded her PIN numbers to her financial transaction cards and told her that if they were wrong, he would come back and kill her," officers wrote. "During her interview, the victim told officers she was sure that she was going to die and that she was just waiting for the suspect to stab her."

The woman's teenage son called 911. Police said, when they arrived, Haskell hid under the covers of the woman's bed and tried to convince the victim to tell officers he was her "lover."

Even though Haskell had already been released days prior, the Utah Department of Corrections put out a statement earlier this week indicating there were "no active plans" to release inmates due to the spread of COVID-19.

Kaitin Felsted, a spokesperson for the Utah Department of Corrections, sent FOX 13 a text message in response to questions asking why Haskell was released early despite official statements indicating there were "no active plans" to do so.

"Haskell was a parolee released from a community correctional center, not an inmate," Felsted wrote. On March 26, the Utah Department of Corrections announced plans for the early release of inmates beginning on April 2.

"Board staff are working closely with UDC to identify incarcerated persons whose early release would not jeopardize their successful completion of evidence-based programming or compromise public safety," said Dennis Moxon, director of the Utah Board of Pardons and Parole.

"We found out (Haskell) was only in that halfway house for a day after being released from the prison," said Lt. Josh Christensen of the American Fork Police Department. "It's hard to say what is a violent -- what is low risk?"

Lt. Christensen confirmed Haskell had a misdemeanor theft warrant for his arrest out of Orem at the time of his release.

"That doesn't seem right to me either to be releasing someone with an existing warrant," Lt. Christensen said. "It’s concerning. It’s frustrating… (Officers) put all this work into an arrest in order to keep our community safe and then they’re released in such a short time."

Felsted said the Utah Department of Corrections was not aware of the arrest warrant, but it would not have changed the decision whether to release Haskell.

"Orem City Justice Court issued the warrant on March 9 for theft class B misdemeanor," Felsted wrote in a text message. "In this instance, we would not have received any formal notification and we would typically not check for a warrant when releasing from a Community Correctional Center. If we were aware of the warrant we would have either contacted the court or requested that the defendant contact the court... whether he was in a Center or on community supervision, our approach would likely be the same."

"I believe, based upon the information included herein, that Haskell presents a serious danger to the public and will continue to commit serious offenses if released from jail," wrote Officer Austin Murray in his American Fork Police Department report.

Neighbors of the victim in American Fork said they were frustrated to learn that the Utah Department of Corrections considered Haskell safe enough to release early.

"Why is a criminal like that out on the street?" asked neighbor Blaine Wilson.

"Ugh. I'm very angry," said his wife, Janice Wilson. "He had to be already some kind of a hardened criminal... For them to just (say), ‘Oh well he might get the COVID-19 so we better get him out of prison before he does.’ Really?! You need to be there for a reason!"

The Utah Department of Corrections has not specified what steps were taken to determine why Haskell was considered a good candidate for early release. They have not answered phone calls from FOX 13 or responded to requests for an interview.

The victim was not harmed physically.

"We’re really thankful that her son was there because, oh my gosh, it could have had a way different outcome, and I’m just thankful she’s okay," cried Janice Wilson.

According to the Utah Department of Corrections, Haskell was in custody of the Utah County Jail from March 19 to March 24 when he was transferred back to the Utah State Prison in Draper.

He is now facing five felonies and two misdemeanors related to the case in American Fork.