How can Utah recover from COVID-19? GOP gubernatorial candidates weigh in 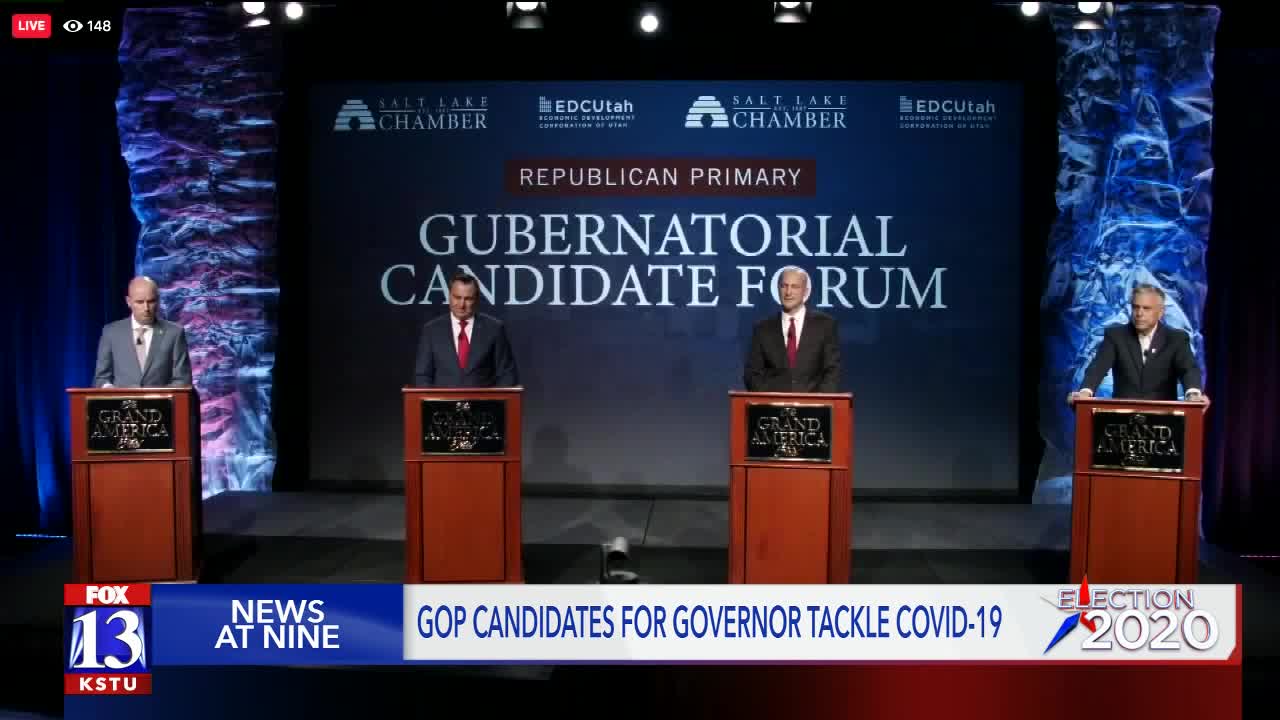 SALT LAKE CITY — Utah's Republican primary candidates for governor outlined their plans on how the state's economy can bounce back from COVID-19, during a candidate forum Thursday.

The forum, hosted by the Salt Lake Chamber and EDCUtah, focused on questions around the global pandemic, as well as other plans and strategies for the state.

Each candidate stood at a podium inside the Grand America Hotel, with social distance in between. They spoke to an empty room, and a virtual audience.

The burning question of the night?

"The impact of COVID-19 has been deep and acute," said forum moderator and Salt Lake Chamber president and CEO Derek Miller. "What is your plan for recovery?"

Lieutenant Governor Spencer Cox answered first, drawing upon the fact that he is already involved in the state's handling of COVID-19.

He explained that there's an economic recovery plan that involves bringing together the "best minds in the state" into groups-- one of them to focus on the health crisis, and the other to focus on the economy.

Cox said he rejected the notion that they have to either focus on the economy or focus on people's health.

"We believe that we can-- by saving people lives, by flattening curve-- we could open up sooner than anyone else in the state, or in the country," he said.

Former Speaker of the House Greg Hughes had a different take. He called for a "get back to work plan," that he said has to happen today-- not a month from now.

He said if they don't have the "get back to work" plan hand-in-glove with the public safety plan, then they are fooling themselves.

Thomas Wright, a business executive, listed off a few ideas that he said were part of a larger plan.

"We need to enact a hiring freeze and a capitol projects freeze," Wright said, of what else he'd want to accomplish. "When you're a business owner and you go through tough times, you take care of the people you have."

Former Utah Governor Jon Huntsman Jr. talked about what he called an "opportunity for rebirth." He focused on wanting to learn what changed during the pandemic, to move forward.

He suggested tax holidays and payroll incentives as well as working with banks and retraining people who can't go back to their previous jobs.

"We don't need 'green, yellow, red' indicators," Huntsman said. "We need cash. That's what businesses need, plain and simple. We need to take money out of the rainy day fund, on an emergency basis."

Each candidate also went through their long-term plans for the state, and answered specific questions that allowed them to expand on some of their platforms.

Though, the overarching topic often stayed centered around COVID-19-- a crisis, with aftereffects that will certainly pose a challenge to Utah's next governor.

The Republican primary election is on June 30. The chosen GOP candidate will face Democratic nominee Chris Peterson in November.