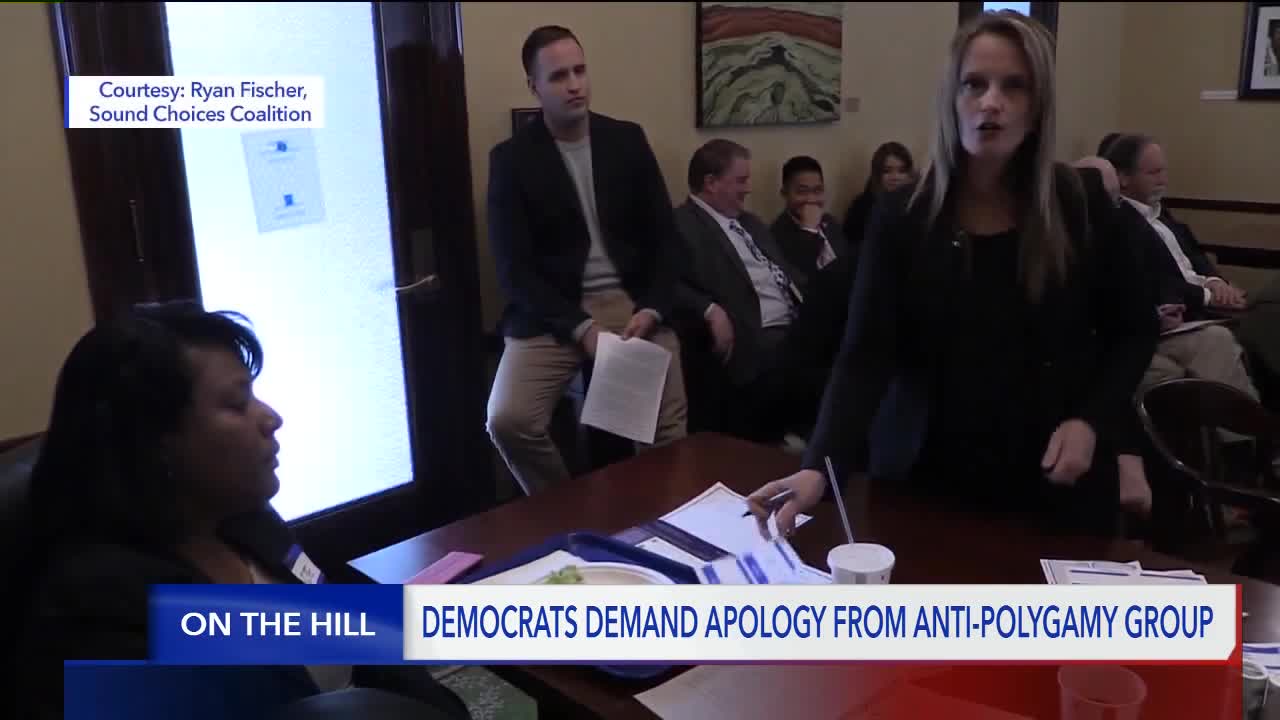 Rep. Sandra Hollins, who is the only black lawmaker in the Utah legislature, said the head of an anti-polygamy group compared polygamy to slavery and placed a card in front of her that read "SLAVE." 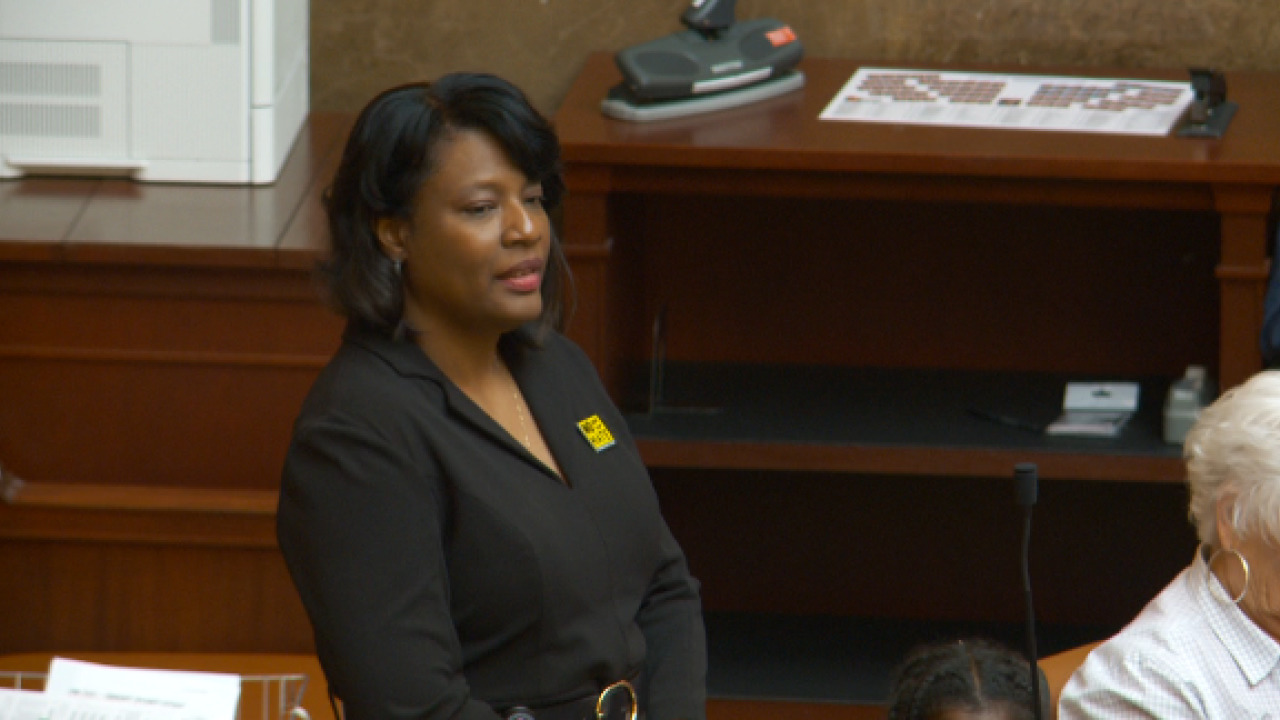 SALT LAKE CITY — The Utah State Legislature's House Minority Caucus is demanding an apology from the head of an anti-polygamy group for "racist and absolutely inappropriate" behavior in arguing against a bigamy bill.

Rep. Sandra Hollins, D-Salt Lake City, who is the only black lawmaker in the legislature, said she was the subject of racist commentary by Angela Kelly, the director of the Sound Choices Coalition. Kelly was speaking to House Democrats to persuade them to vote against Senate Bill 102, which would reduce bigamy among consenting adults to an infraction.

"I’m still very angry about it that it happened and that she had the audacity to come into this caucus, to a place where she was invited and think that what she did was OK," Rep. Hollins said Friday in a meeting with reporters.

Video of the presentation itself was shared with FOX 13 by the Sound Choices Coalition. Kelly had a camera crew with her.

In her presentation, Kelly equated polygamy to slavery as she spoke about how girls become prized and boys were kicked out as men within the communities sought to gain more wives.

"When we had slavery working in this country, you had people like her, with her skin color, that they put a label," Kelly said in the recording. "Your skin is black and you, you’re not your own anymore. The reason why this happens is really simple: there’s not enough women when you say someone can have more than one."

Rep. Hollins said Kelly placed a card in front of her that read "SLAVE."

"Laid it in front of me and made some comment about me being black and slaves," she said.

As the presentation goes on, the video shows Rep. Hollins getting up and walking out. She told reporters that she was going to speak up, but did not feel safe in the room anymore.

"The more I thought about it, the angrier I got. Because I started thinking, 'Why is it my responsibility to educate this woman on this? She should know better,'" Rep. Hollins said.

Rep. Angela Romero, D-Salt Lake City, said when she heard what happened she walked into the House Minority Caucus room to shut the discussion down.

"Never is it allowed, from my perspective, in this caucus, to compare anything to slavery," Rep. Romero said on the video.

"I’m sorry, you are wrong. You are absolutely wrong. You cannot be closed-minded like that. You have to be willing to say 'Maybe I don’t know everything about this issue.' You’re closing off all options," Kelly replied.

"You offended members of our caucus," Rep. Romero said.

"We’re not here to debate. We’re here to get information," House Minority Whip Carol Spackman Moss, D-Holladay, interjected, trying to steer the discussion to the bill itself.

In an interview with FOX 13, Rep. Romero said she "about lost my mind" when she heard what was said. She also expressed frustration at her fellow Democrats not speaking up to shut the presentation down.

In a statement, the House Minority Caucus apologized for its own members not speaking up to defend Rep. Hollins.

"As a caucus, we regret not confronting and shutting down Angela Kelly’s presentation earlier and for allowing a mortifying presentation to proceed. Mrs. Kelly should apologize to Rep. Hollins. Her behavior was racist and absolutely inappropriate," House Democratic leadership said.

But Kelly told FOX 13 she does not feel the comparison between polygamy and slavery is unfair.

"I meant no offense in my presentation, and if I offended the [representative], I apologize," she said Friday. "But the comparison to slavery is relevant and I’m not the first one to make the comparison."

Kelly denied writing slave on the tag and accused Democrats of "twisting this for their benefit obviously, because of they don’t like what I’m saying." The video does show her writing something on a nametag and dropping it in front of Rep. Hollins.

Kelly said she was willing to meet with Rep. Hollins, but she said she believes the comparison of polygamy and slavery is appropriate, given the history of abuses.

"There’s lots of different types of slavery that you hear about today. You have sex trafficking which is considered slavery, you have labor trafficking which is considered slavery. Certainly I wouldn’t want to compare polygamy 100 percent to what we had with slaves in America," she said. "They are different, but they are the same monster. They’re the same beast. That’s the comparison I was making."

The Utah Black Roundtable, a group that advocates for the black and African-American community, denounced the comparison and treatment of Rep. Hollins.

"The Utah Black Roundtable calls on Ms. Kelly to publicly apologize to Rep. Sandra Hollins for the harm and injustice she caused by her actions," the group said in a statement. "We also encourage her to seek education on the full impact of slavery. The consequences of its practice continue to permeate the fabric of our society today in how we deal with race."

Rep. Hollins said she believes Kelly should apologize to the entire House Minority Caucus and she called on others to speak up about racism.

SB102 passed the Senate on second reading without debate and the vote was unanimous. It has one more vote in the Senate and, if it passes there, goes to the House for debate.

Watch the full presentation below: