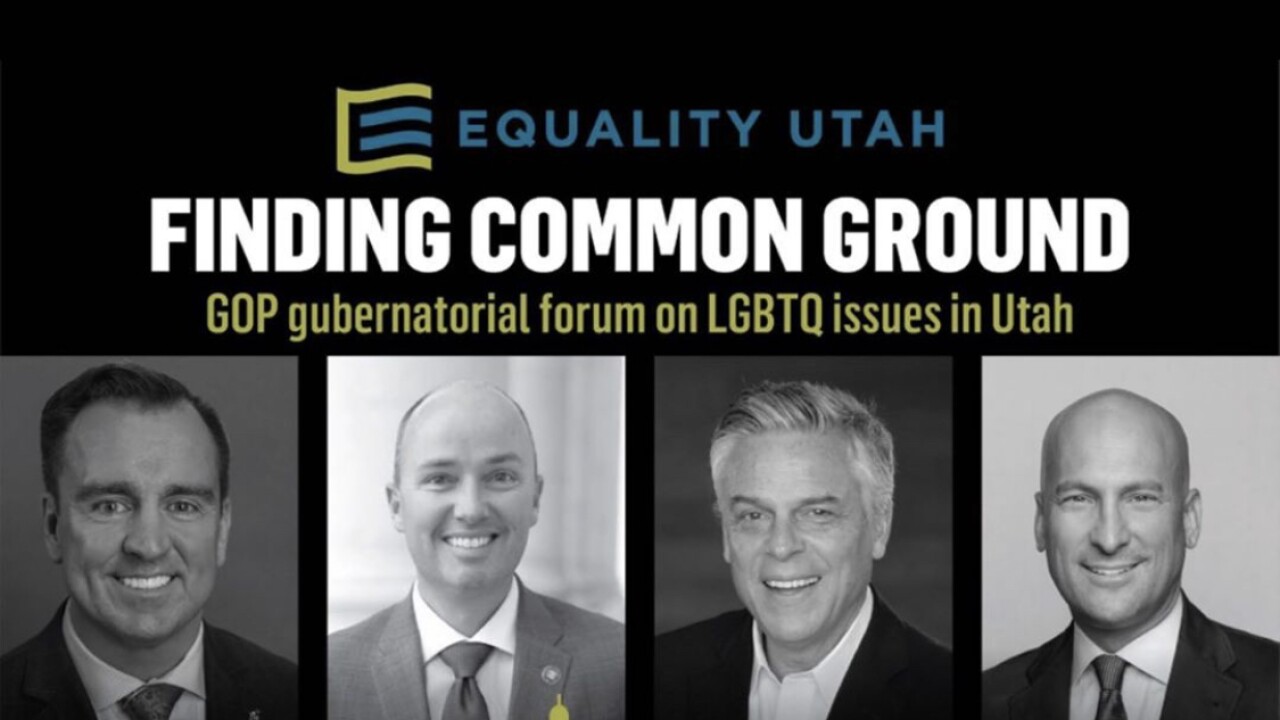 SALT LAKE CITY — The Republican candidates seeking to lead one of the reddest states in the nation have all agreed to appear in a forum on LGBTQ issues.

Equality Utah, a political advocacy organization for LGBTQ rights, will host the GOP candidates for governor in an online forum on Friday, FOX 13 confirmed. Thomas Wright, Spencer Cox, Greg Hughes and Jon Huntsman Jr. are all scheduled to participate.

"This week, we celebrate the 90th birthday of Harvey Milk, who famously taught that if we are to live in harmony, we must build bridges from community to community," Equality Utah Executive Director Troy Williams said in a text message. "In our hyper-polarized country, that is becoming increasingly more difficult. But in Utah, we always look for ways to defy expectations. We hope our forum with GOP candidates will continue to build bridges in Utah so that we can show the nation the value of dialogue and outreach."

The event will take place May 21 at 7pm and is streamed on Equality Utah's Facebook page.

It is believed to be the first time the group has hosted a Republican gubernatorial debate, though Equality Utah has endorsed LGBTQ-friendly Republicans in the past. It is also a sign the candidates are not rejecting any potential voters as they head into the GOP primary election at the end of June.

"Troy Williams and Greg Hughes have a track record of working together to find common ground rather than differences, so when Troy asked we accepted. It’s as simple as that," Hughes campaign manager Greg Hartley said in a text to FOX 13.

"Spencer believes that the Republican Party is one of inclusion. He is a consistent conservative with an authentic message that appeals to all Utahns. We look forward to participating with the other candidates," Heather Barney, spokesperson for the Cox campaign, said in a statement.

"Gov. Huntsman is eager to engage with all voters to better understand the issues most important to them and to inform policy development that benefits all Utahns. Equality Utah does important work to break down barriers and help unite our community and the Governor is looking forward to sharing his vision for the state," Huntsman's campaign said in a message to FOX 13.

"Since 2012, when Thomas was the first GOP chairman to attend the Allies Gala, he's believed that it’s important to listen to all Utahns. One of our state’s greatest attributes is our diversity and our willingness to respectfully listen to different points of view," the Wright campaign said. "Equality is the foundation of our nation. Thomas believes all people are created equal and that breaking down barriers so that everyone may peacefully pursue life, liberty and the pursuit of happiness is critical for Utah’s next Governor."

Despite the state's reputation as a highly religious and politically conservative place, the Utah State Legislature has gradually passed LGBTQ rights bills including a landmark non-discrimination law for housing and employment, a hate crimes law and a repeal of laws banning even the discussion of homosexuality in classroom. Recently, Governor Gary Herbert pushed through an administrative rule to ban conversion therapy on minors (after the legislature failed to pass it).

Utah's ban on same-sex marriage was overturned by a federal judge in 2014 (one of the plaintiffs in that lawsuit, Derek Kitchen, was later elected to the state senate).